Combat efficiency of a fighting force at unit/subunit level depends mainly upon the enterprising junior leaders. Young officers should have attributes of both mental mobility enabling quick decision-making as well as physical fitness and firing proficiency to lead from the front in the field. Alongside routinely organized/moduled training, young officers should engage themselves in activities which can enhance leadership qualities required in the field. Outdoor culture, field sports, adventure sports, shooting and stalking promote these qualities in young officers. These do not only keep a person physically fit, but also embolden the spirit and provide plenty of self-confidence as well as healthy entertainment. Legal and well-regulated trophy hunting programs play an important role in delivering benefits for both wildlife conservation and welfare of local communities living in that particular area. 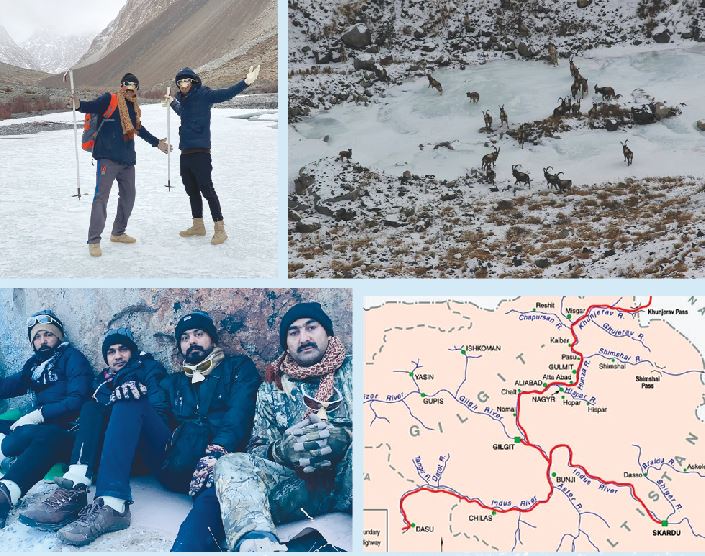 Pakistan holds perfect areas for high quality adventure sports from the mighty stretches of the Karakoram in the north to the vast alluvial Delta of the Indus River in the south, thereby enticing many adventurers and hunters towards Pakistan. Unfortunately, these adventure heavens are seldom ventured by our own countrymen including Army persons. In order to promote adventurism, Headquarters 31 Corps sponsored a Stalking Team comprising four officers (Major Sultan, Captain Nadeem, Captain Asif and Lieutenant Ali) posted in Bahawalpur. Misgar Valley, located at the northern edge of Gilgit-Baltistan at an altitude of 3,100 meters, being one of the places perfect for trekking, survival training and stalking was selected for a stalking and tracking expedition. The stalking team commenced its expedition from Bahawalpur on February 29, 2020 and reached Gilgit on March 2. After necessary coordination in Gilgit, the team moved to Hunza on March 4 and arrived at Misgar Valley on March 5.

Misgar, owing to its scenic beauty and natural habitat, is an attractive valley full of mesmerizing views. Combination of brown lofty mountains surrounding a lush green valley presents an eye-catching contrast. Abundance of scattered fruit trees in the valley, once laden with flowers during spring, add further color. Misgar is located on the ancient Silk Route which was the only passage to China before the opening of the Karakoram Highway. People of the valley are very humble and famous for their hospitality. Misgar Valley has a very wide range of pastures where there is wildlife in huge numbers. These wild animals travel between Pakistan, Afghanistan and China.

Before proceeding on the trek for hunting, the team checked zeroing of their weapons on March 5 at Misgar. As per firing practices and our own experience, the bullet should have been hitting higher than the point of aim due to change in altitude but on ground the bullets were hitting 1.5 inches lower than the point of aim due to major difference in temperature between Bahawalpur and Misgar.                        Once we were confident about zeroing of our weapons, we started our ascent towards the area selected for stalking. Thunderbolt (SC-76) along with M118 rounds, spotter scope, binoculars, Kestrel weather station and camera was decided to be taken along. The team was moving as planned; freezing cold weather with chilling breeze was constantly testing our resolve. After 4 hours of endurance march, the team had to take a forced break for a night in a stone hut which appeared to be nothing less than a great refuge from the challenging weather conditions.

It was the morning of March 7, when a herd of ibexes was spotted near Hut no. 1. Spotting the trophy so early in our quest was overwhelmingly tempting, however, due to the small size of animals the we decided not to hunt any of them. After trekking for another 5 hours, on March 7, 2020, our team reached at another camping site (Hut no. 2) and decided to spend the night there.

The team spent the next whole day (March 8) for reconnaissance and glassing of likely ibex locations, sizes and prepared the detailed stalking plan. We decided to move early morning before dawn to conceal our move from the intended ibex that had been selected for stalking due to its size. Furthermore, our team adopted stalking procedures and concealed ourselves behind a pre-decided boulder to stalk the move of the ibex until it came in the shooting range. It was planned that I would take the shot, assisted by Lieutenant Ali as a spotter, Captain Nadeem as the cameraman and Captain Asif for re-calculating firing solutions.

After spending another night in the chilling cold weather and looking for big heads, on March 9 at about 0430 hours, the team started moving again towards the pre-decided boulder and took their positions. Our destination was a boulder outcropping that overlooked a bench below and seemed to be hours away. Finally, the destination was reached but here started the next challenge. Sitting in a steady position for 7-8 hours at -120°C, exercising strict control even on our breathing and stalking the trophy was very grueling and tiresome task.

The weather was extremely harsh, and the frosty breeze was slapping our faces repeatedly, but it also carried the pungent odor of the ibexes fueling the resolve and rekindling the hunting instinct time and again, just when it was about to die. Then came the moment for which we had been impatiently longing for. A herd of ibexes appeared; we felt a sudden adrenaline rush with a surge of emotions, but we remained calm as we had trained ourselves for this moment. A little impatience or a miscalculated move may have resulted in losing this opportunity. The team initially decided to take a shot from the same location, however, cautiously changed the plan due to steepness of the slope (a very high angle) and the high speed of wind. While observing the stalking rules, we decided to creep closer to the target. On reaching closer, it was revealed that the ibex had gone on the reverse slope of the ridge. Nonetheless, the motivated officers mustered the strength and followed the game. At about 1500 hours, 4 ibexes including the biggest head were spotted at a distance of 264 meters.

All team members took positions and prepared the weapon with meticulous ballistic calculation. I, with the weapon in my hand, could see the dream of trophy hunting coming true. I could listen to my heart throbbing at an intense rate and even the chilling cold weather could not stop the drops of sweat flowing down my forehead and into my eyes. Clearing my eyes with my hand I took a long silent breath to take control of myself and cautiously stalked forward to reach a better position for taking aim. I took a moment to admire the ibex through the binocular while trying to calm my oozing excitement. While looking through the scope, I reflected on the time spent at the range in Bahawalpur and lessons learnt during 2nd Muhammad Ali Jinnah Shooting Championship i.e., aim, breathe and squeeze. Then came the moment, report of my rifle echoed and filled the canyon. The big head was down. I chambered another round and watched it through the scope as a surge of adrenaline and emotion finally overcame me. We rushed towards the hunted ibex with inexpressible joy. We had done it and achieved what every hunter dreams of; harvesting a magnificent 46″ ibex in the mountainous area. Our resolve and consistency in pursuit, battling doubt as well as wit of an animal who called this rugged area home had enabled us to catch the ibex off guard. 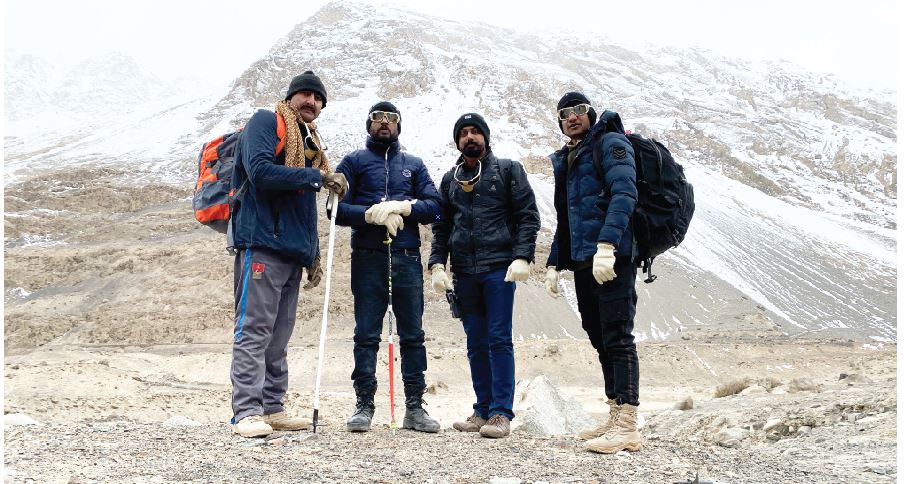 Upon reaching the hunted ibex, the team was awestruck by the size and beauty of the animal which was overwhelming. Knelt beside the ibex, hands on its horn, our team was falling short of words to thank Almighty Allah. The sense of accomplishment coupled with the loss of life is present at the end of every successful hunt. Photos were taken to commemorate the experience. The 46 inch big head was hunted down with the very first shot and impact of the bullet was exactly at the foreleg/vital organs. Hence proving that success is judged by quality, not quantity.

Young stalkers have many lessons to share from our stalking experience. Angular calculation for uphill/downhill shooting, applying lead while engaging a moving target, controlling nerves under stressed conditions and observing patience while stalking the trophy was the hallmark of hunting adventure in mountains. Our team practiced application of ballistic calculations in different temperatures and managed to apply it systematically, the skills we had learnt in 2nd Muhammad Ali Jinnah Open Shooting Championship held at Bahawalpur. Battling the chilling temperature below freezing point and frigid breeze made our bond stronger, enhanced our capabilities and made us realize the fact that human endurance has no limits, making us capable of doing anything anywhere. Moreover, the team also learnt the importance of physical fitness, endurance and survivability of the hunters in severe weather conditions.

A hunter undergoes challenges in physical as well as psychological domains which are an essential part of military grooming. Likewise, tracking, patience, range estimation, incorporation of ballistic calculations and choosing an appropriate time for taking a shot are the lessons which were equally useful for the profession of arms.