Joint Services Pakistan Day Parade, 2019 Female Contingents
March is the month when all across the world, including Pakistan, United Nations Day for Women’s Rights and International Peace is celebrated to appreciate all the women of the world, who are making enormous contributions in all walks of life, but also to make sure that they make use of the power they are born with to carry on their various roles for the betterment of the world. Also the day is celebrated for International Peace and that goal cannot be achieved without the contribution of almost half of the population of the world that women comprise. 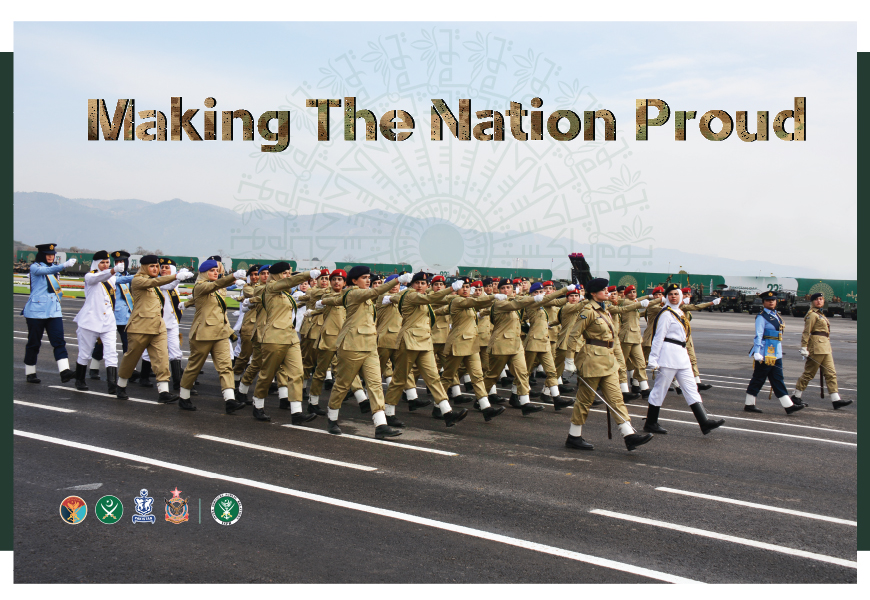 In this same month, on March 23, 2019, Pakistan showed to the world — when it celebrated the passing of Pakistan Resolution of 1940 by holding a military parade — that it is a country where women are empowered and they are prepared, in these trying times, to defend their country against any aggression — internal or external — and to guarantee that not only the people of Pakistan can feel safe but that world peace is also ensured. This was fully demonstrated as the marching column of Tri-services Lady Officers marched in, led by Major Doctor Ghulam Fatima of Army Medical Corps (AMC), Lieutenant Commander Afshan Zubair of Pakistan Navy and Flight Lieutenant Fariha Nazir of Pakistan Air Force. The first four files of the marching column were of officers of Pakistan Army followed by those of Pakistan Navy and then Pakistan Air Force. 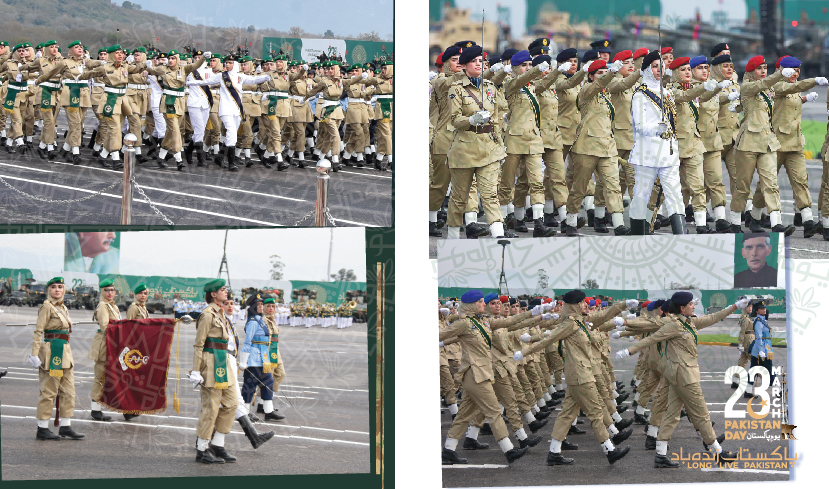 Next was the marching column of officers from Tri-services Armed Forces Nursing Services (AFNS), led by Captain Roohi Rafique of AMC, Lieutenant Commander Shabana Nawaz of Pakistan Navy and Squadron Leader Asma Iqbal of Pakistan Air Force.
The contingent commanders held swords like their male colleagues had done just moments ago, showing strength and resolve along with the unmistakable impression that they stand shoulder to shoulder with men for the defence of their country, that challenges might be there, but Pakistani men and women are prepared for every sacrifice needed. The sight was awe-inspiring and extremely reassuring for the whole nation as they watched the incredible display of Pakistan’s military might.
Last but not the least, came the marching column of Pakistan Girl Guides Association led by Inza Ghazal. These women displayed all the enthusiasm, strength and spirit that were characteristic of the first Pakistani Girl Guide, Ms. Fatima Jinnah.

All three contingents had women hailing from all over Pakistan, not only showing diversity but also that women from all over Pakistan want to contribute towards its peace and progress and have the support necessary to carry out their responsibilities in this regard.
Major Sanam Rabbani echoed the sentiments of the women of all three contingents when she said, “Being part of lady officers contingents in JS Parade, March 23, 2019 was like a dream come true for me. Resilient, brave and disciplined soldiers marching together in unison and harmony had always fascinated me. It was indeed a golden opportunity to interact with my sister officers in coveted  display of  excellence and be a part of the group that exhibited national pride, unity, strength, preparedness and resolve to meet any challenge facing our nation. Obviously it was a tough routine, to practice and rehearse for a flawless performance but exciting applause, frenzy and ecstatic love of the audience at the end, overflowing with pride and reassurance, and encouragement received was worth more than our humble effort and service. When the nation feels safe and secure, soldiers feel honored and their blood, sweat and scars become their source of pride and strength.”HH