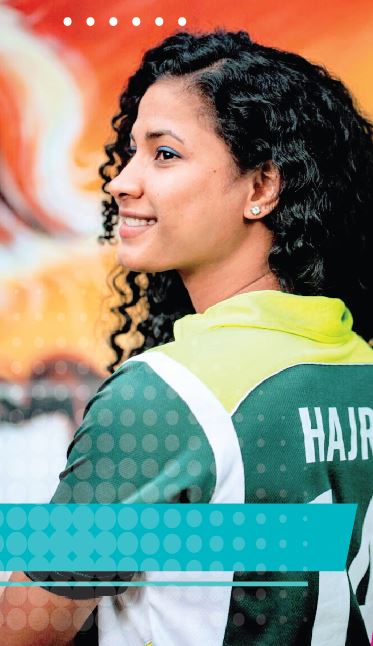 “I just need the opportunity to teach the rest what I have learned so far to make Pakistan get a better ranking on FIFA.”

Hajra is the only Pakistani female footballer to score more than a hundred goals in her career. The tenacious Guinness World record holder for playing the longest football match ensuing 69 hours in Lyon, France is also the Captain of Pakistan Women's National Football Team, a TEDx speaker, board Member of United Nations Development Programme (UNDP) Pakistan for Youth Programs, a UNICEF Menstrual Health Champion and above all a symbol of female empowerment. She has defied all odds in her battle for not only equality but also appreciation.
In an exclusive interview with Hilal for Her, Hajra Khan, talks about her passion for football, opens up about her struggle with clinical depression and advocacy for mental health, as well as her ambitions for the future.

You have made history by scoring a hat-trick; you have managed to achieve three Guinness World Records in the past year. Where does your unwavering passion for the game come from?
I have always been athletic; ever since I was a kid, I was into sports. Growing up I was very competitive but I was also a shy and quiet individual, so there was a lot of focus on what I would do. I would excel at sports because I loved the fight and the aggression in it. I won my first marathon at the age of 11. Being a track athlete requires a lot of focus. It is an individual sport, it is way different from a team sport, where you have players who cheer you on if you make a mistake. At the age of 14, I tried out for the provincial team of Sindh. When I first saw the ad for it, I went to Mum and she told me that you are already running so it is better that you now run after a goal. She would take me to the tracks and I got picked by a club team, which is ranked higher than the provincial team. Two months into playing football, I played at the National Championship and became the top scorer. I went back next year and started training with the club and broke my own record. What keeps me into sports is because of the stereotype that girls are weak and fragile and also because football is known as men’s sport; I always wanted to change this mind set and I feel like 12 years down the line I have. It has been slow but still it is progress as long as we are moving on.
Did you face any criticism when you told everyone that you wanted to pursue football as a career?
I had immense support from my immediate family but my extended family was a little hesitant and they did not really like the idea of me pursuing it as a career. Today, they are all very proud of me but it has been rough a journey, especially on my parents because initially, their own siblings refused to talk to them. I am forever grateful to my parents for sticking around when they were pressured not to. 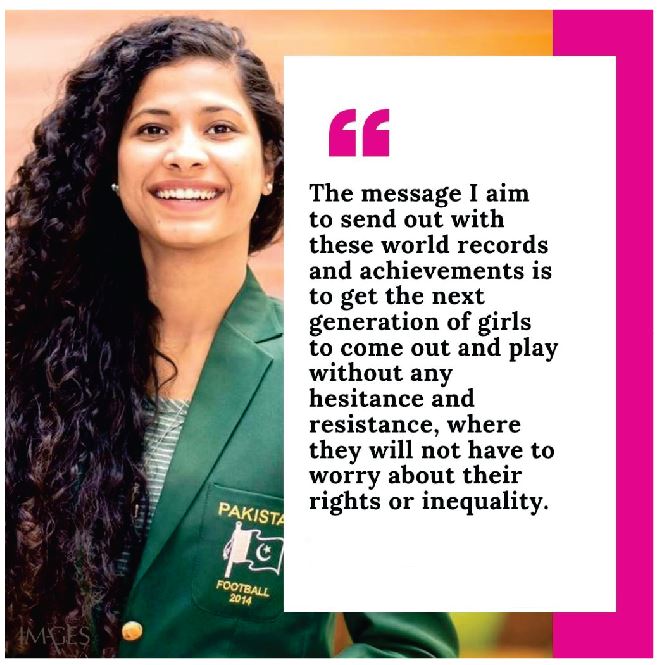 What challenges and societal pressure did you face?
Recognition and all comes later but making sports a career in Pakistan is next to impossible even for a man; I mean if you are not a cricket player things are not easy. Making sports a career is very difficult specially if you are a woman because of our cultural norms — there are these invisible cages that we need to break free from. When I started training, I literally had threats to not show up on field but every day I would go and kind of prove to them that this is my right. Today, after years of fighting there is acceptance from society. It makes me happy to see parents want to bring their daughters into sports because when I started playing, there were not many role models to follow and so, I decided that I was going to be one.
Which footballer has been your inspiration and what do you think are the three most important qualities to be really good at football?
I have been inspired by Brazilian football player, Marta (number 10), she plays with the Brazilian National Team and she is one of my idols. Pele, is another favourite but I actually grew up watching Thierry Henry from France.
Three qualities that I would say important are: you have to be a team player; it is not an individual sport so you cannot be selfish for your own performance, you need to be a good sport to be on the team — that is the number one thing. Number two is, understand why you are doing it. Number three, you need to know how to have fun because football is crazy fun. It is unpredictable, it is 90 minutes of uncertainty. You have to stay grounded but also have fun no matter what the competition is, because at the end of the day, whoever played with heart is the winner.
You have done the nation proud by making your mark internationally; what more do you wish to accomplish in the coming years?
I have been playing in Pakistan for about 12 years. I was fortunate enough to have also trained in France and Germany, and playing in Maldives for two years. Last year, I was training in DC and managed get international exposure that I am really grateful for. For me bringing all that to Pakistan and having that executed is absolutely fantastic. I just need the opportunity to teach the rest what I have learned so far to make Pakistan get a better ranking with FIFA.
You have been extremely vocal regarding the issue of clinical depression; walk us through your journey of battling the stigma of mental illness?
I was diagnosed with clinical depression and I have functioning anxiety for about three years. My first breakdown was actually on the field in 2016, when we were training for South Asian Games (SAG). I did not know what was going on; I felt weak inside. It took me a year to convince myself that to take therapy because being weak is absolutely an antithesis to what an athlete is supposed to be. I soon realised that I might not be the only athlete who is going through something and till date I use football as my platform and made it my mission to be an advocate for mental health for athletes. 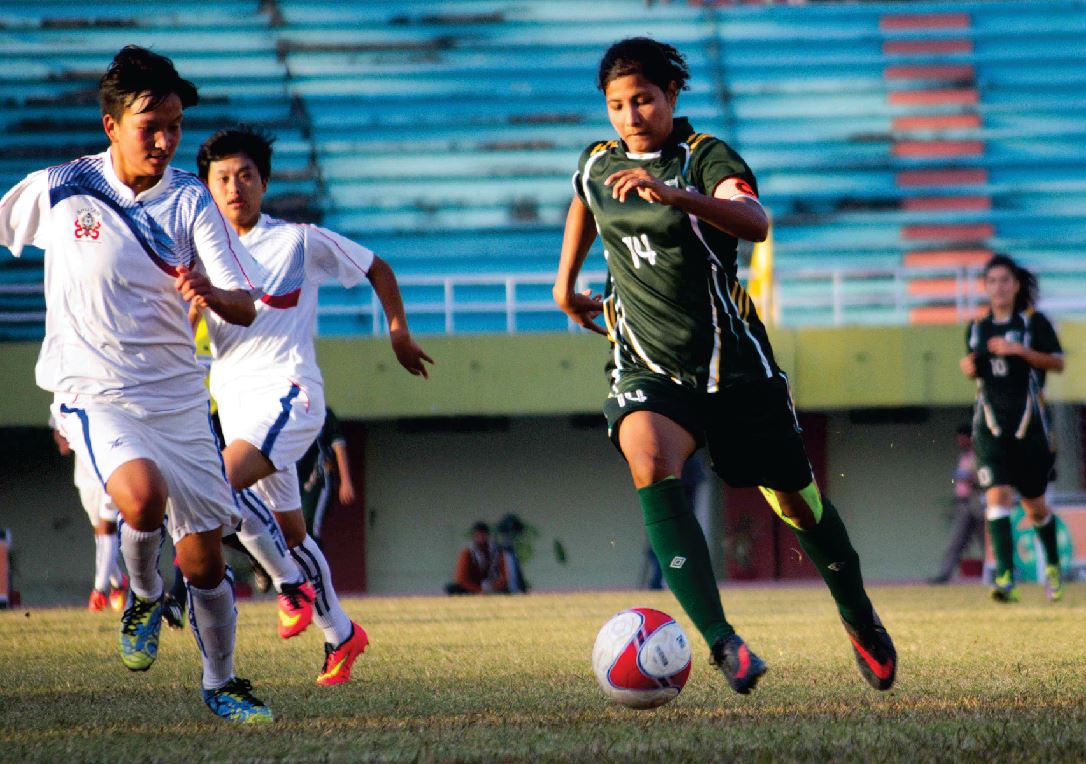 Athletes are known to face depression due to long training hours, pressure from the coaches and team members and the never-ending expectations from the audience. There is always a fear of injury, fear of being dropped out of the team, you always have to be performance ready, so there are a lot of stresses that an athlete has to go through. So, I will keep on advocating about mental health in sports as much as I can.
Please share a few words of encouragement and motivation for all the girls out there who wish to follow in your footsteps.
A few things that I would say to the girls or the younger generation, is to know your true worth. You need to know why you are doing a certain thing — it is all that matters. It will give you direction and that is how you find your passion. Once you find your passion, nothing can stop you from getting there. It is not easy to pursue sports or any field for that matter. Either you could try to shut the world out or you could step out every day and come what may, just fight and fight because that is what it is all about. HH