Girls in Green Bring Cricket Back Home after winning gold in 2010 at Asian Games.

Go by common opinion and one finds a vast majority of the population of the view that women’s cricket is either boring or not as great as men’s cricket. Tell that to the crowd in Karachi and Dubai, who enjoyed the recent West Indies vs Pakistan women’s cricket no less than any men’s cricket. Tell it to those girls’ families and friends who supported them as ardently as any boy/son playing a match. It is not only our innate ignorance that we tend to criticise female athletes but also the lack of exposure to the Pakistani women’s cricket team in the media. But hold on, aren’t we Pakistanis a cricket-crazy nation? Why do we need to match up our women’s cricket matches to those of our men’s cricket team? At the end of the day gender should be irrelevant and it should all be about cricket. 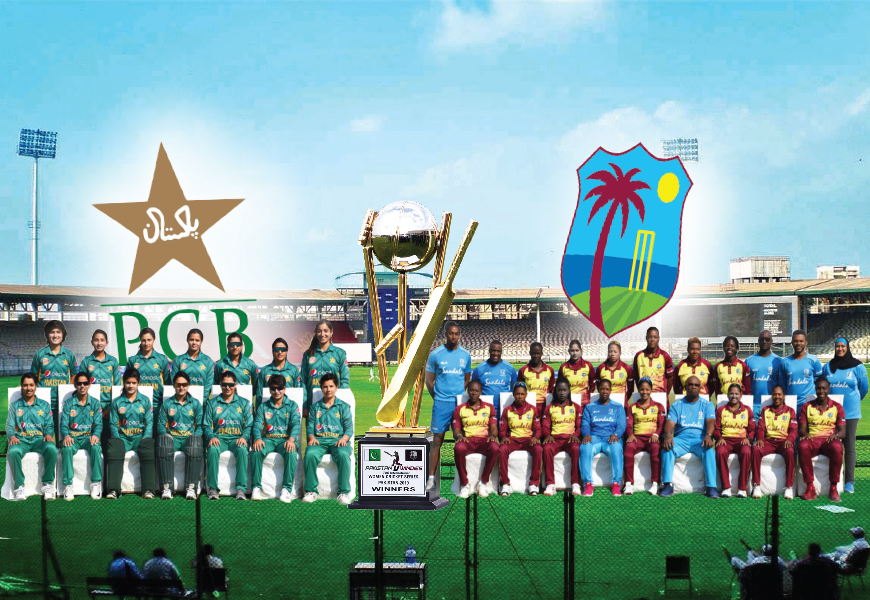 Looking back ten years, we’ll notice that there were hardly any headlines, televised or written in newspapers, regarding Pakistan Women's National Cricket Team. It happens to be new for us because it had never been a part of our lives. Pakistani women cricketers made their international debut in 1997, but the astonishing fact is that Pakistani women’s cricket team came into the limelight after winning gold in 2010 at Asian Games, Guangzhou, China.

Pakistani women’s cricket team has taken an unprecedented lead and carved its niche by reviving international cricket in the country after a long isolation period, where we witnessed that other nations had turned down the idea of playing any cricket on Pakistani soil. For this, our girls in green deserve special thanks from the entire nation.

Fortunately, Pakistani women’s cricket team has taken an unprecedented lead and carved its niche by reviving international cricket in the country after a long isolation period, where we witnessed that other nations had turned down the idea of playing any cricket on Pakistani soil. For this, our girls in green deserve special thanks from the entire nation. The decline of international cricket in Pakistan dates back to 2009, when the Sri Lankan team was attacked near Gaddafi Stadium, Lahore. We also witnessed a similar case in 2002, when the hotel in Karachi where the New Zealand team was staying, was attacked. Following these attacks, all subsequent cricket series were relocated to UAE. Nevertheless, 2003, proved to be a lucky year as the Pakistani cricket bounced back and several international teams such as South Africa, India, and Bangladesh toured Pakistan to play ODIs and Test series.
Pakistan Cricket Board (PCB) has fought tooth and nail to bring international cricket back home. The significance of West Indies Women’s cricket team’s arrival in Pakistan after more than a decade is noteworthy as well as commendable in every sense of the word. Pakistani nation and cricket fans shall always remember the decision by the West Indies women’s cricket team to play in Pakistan with great admiration and gratitude.

We should be thankful to the women’s cricket teams for illuminating the City of Lights with their presence and specially for providing the chance to our youth to watch live international cricket matches in their city. The decision of Cricket West Indies (CWI) for playing in Pakistan has conveyed an important message to the rest of the world that it is absolutely safe and secure to play in Pakistan. PCB’s Chief Operating Officer (COO) Subhan Ahmad said, “The PCB and the CWI have a very long history of collaboration and mutual respect, and this decision further illustrates strong relationship between the two boards. With the West Indies women’s cricket team’s agreement to partake in the three Twenty20’s International, the CWI has reiterated their support for a key member of the cricket fraternity in a time when we are working extremely hard to get international cricket back into our backyard.” 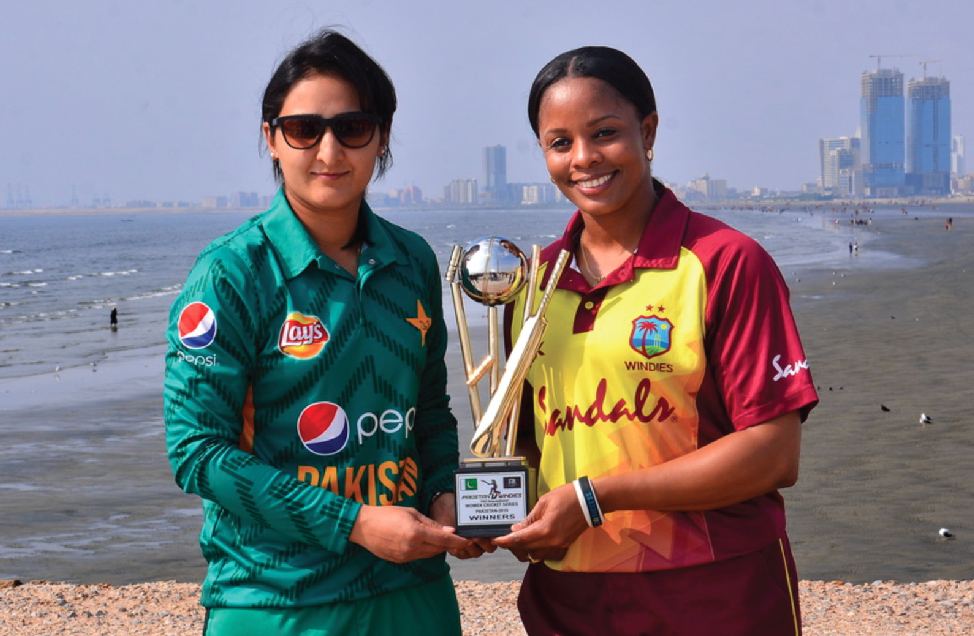 The Caribbean Queens and the Girls in Green, played three Twenty20 International matches in Karachi in the build-up to the ICC Women's Championship fourth round fixture from the 31st of January to the 3rd of February, 2019. The Twenty20 International matches were followed by the first ODI, which kicked off on the 7th of February at the Dubai International Cricket Stadium, while the second and third matches (played on the 9th and 11th of February, respectively) were assigned to the ICC Academy ground.
West Indies dominated the first leg of their Pakistan tour with a 71 runs win margin over Pakistan. The right-handed all-rounder, Deandra Dottin, along with wicket-keeper/batter, Chedean Nation, helped the West Indies with their win. They gave a challenging target of 160 runs to Pakistan and the hosts eventually were dismissed for 89 runs in 18 overs.
The 2nd T20 match at the Southend Club in Karachi showcased high level excitement by resulting in a ‘Super Over’, an expected reaction when the match comes to a nail-biting finish. Pakistan chose to bat after winning the toss; Javeria Khan and the Pakistani captain, Bismah Maroof, managed a partnership of 59 runs and the Pakistani team scored a total of 132 runs. Although it was a respectable target to chase for the Caribbean Queens, but given their strong batting line West Indies took away the game and won the three match series. Pakistani women’s cricket team lost the T20 series 2-1, but victory in the last match (Sana Mir's 100th T20I - the first Asian cricketer to appear in 100 women's T20Is) on a joyful Sunday afternoon turned out to be an appropriate end to the series for the Girls in Green.

After an electrifying T20I series in Pakistan, our girls made a great comeback in their ODIs and demolished West Indies with their all-round brilliance and won the three-match series 2-1 in Dubai. Choosing to bat first, Pakistan made 240 runs in 49.4 overs, featuring Sidra Ameen’s 96 runs and a spectacular 81 off 86 from Nida Dar with Diana Baig and Nashra Sandhu, claiming three wickets each, thus succeeding in clinching first-ever ODI series win against West Indies.
West Indies’ interim captain, Merissa Aguilleira, called for the other cricketing nations to return to Pakistan. She expressed her admiration for the people of Pakistan in her statement at a media conference, "When I came off the flight, the hospitality and warmth of the people who are so caring and loving caught us by surprise. When it comes to bringing back cricket to Pakistan, I believe other teams should also rethink about coming to Pakistan." She further responded to the question regarding her team’s decision for coming to Pakistan despite security concerns, saying, "Of course, we had mixed emotions, but I mean when I am looking at it right now, if we had not come to Pakistan I would have been so disappointed. Away from Pakistan, you think differently about the situation here, but when you are here and there is so much going on, you get lost in the cricket."
Even though women’s cricket team has less female followers but the performance of our girls serves as an inspiration and motivation for the young girls to take up cricket not only as a passion or sport, but as a profession. That I believe is the biggest achievement of our Pakistani women’s team who has made use of this opportunity and has made the female youth believe in carving their own journey and identity if they set their hearts to playing for their nation.
A force to be reckoned with for this revolutionary change is none other than the former veteran captain and a pioneer for the women cricketers of Pakistan, Sana Mir. She takes pride in being the first Pakistani bowler to clinch the top spot at the ICC ODI bowling rankings, adding yet another feather in her cap.
This tour was important for the promotion of women's cricket; the continuing improvement in the performance of Pakistan’s women team advocates the fact, that by engaging the players regularly in training camps and quality cricket tournaments round the year, Girls in Green undoubtedly have a bright future at international level in the years to come.
When talking about the overall development of women’s cricket, we should not forget to mention the pivotal role of Lahore’s historic and well-known Kinnaird College for Women — a nursery that continues to polish the skills of talented girls and produces the finest players who have proudly represented the nation at national as well as international levels.
The destiny of women’s cricket can be shaped by the educational institutions where they should motivate young girls to take up cricket from an early age in order to have a girls’ team in every school and college.  This will not only help in discovering raw talent but we will also have more educated players in our teams.
Another major problem that proves to be a hurdle for our female players is financial constraints. Female cricketers should not only be financially supported by the government but by different companies/banks/sponsors as well. The dilemma unfortunately does not end here; we need to provide character-building skills to our girls. Our training academies should focus on these skills with the belief that our women’s cricket team is equally capable as our men’s team and if given the proper chance, they have, they can, and they definitely will prove their mettle on the pitch.
An appropriate balance of integration, investment by the respective boards, attention and support for the women's cricket team will help the sport grow on an international level. Women’s cricket should not be a battle for survival but a year-round schedule of international matches should be conducted in order to be at par with other leading international women’s cricket teams.
Against this gloomy backdrop, it is no less than a milestone for the Girls in Green to be placed in the ICC Women’s T20 World Cup tournament in Australia, in the coming year. Let’s cross our fingers in anticipation as international cricket is returning to Pakistan. Here’s hoping to restore our lost glory for more cricket at home, and for more trophies and championships our way. HH