If one keeps working hard and believing in themselves, they can not only break the shackles that keep them from realizing their potential but they can also bring pride to their families and country.

I am nowhere near my limit. I just want to see if there are such things as limits. I want to go and find out.
(Clara Hughes)

Whenever there is talk of sports in Pakistan, usually cricket and hockey come to mind, and that too played by the men’s teams. Hence, all the limelight, support, national pride and even sponsors are hoarded by these sports and teams. But the fact of the matter is that there are many other sports being played in Pakistan, not just by men but also by women. 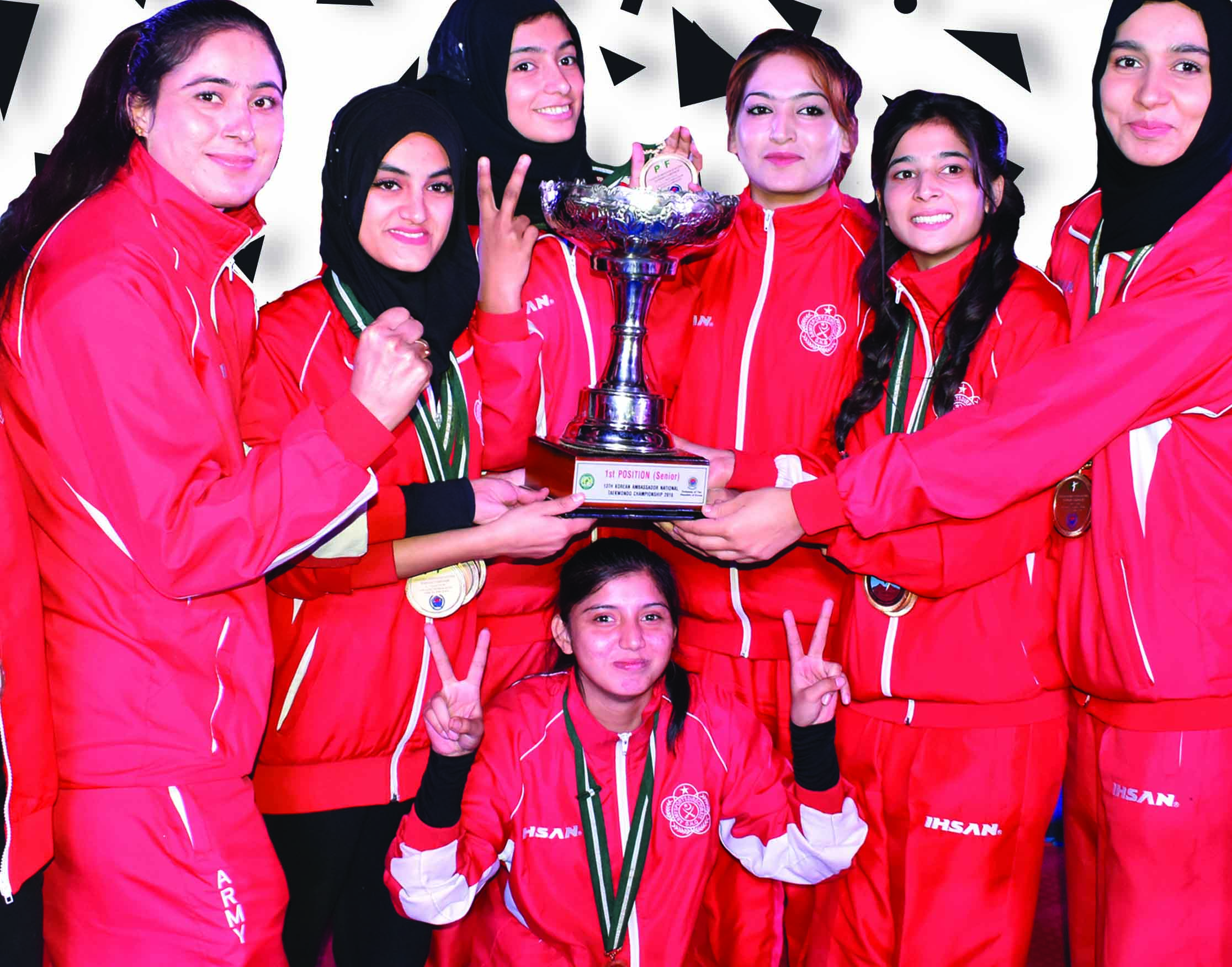 And, these players are bringing home laurels and adding to the honour and pride of our country, even though they don’t always get the recognition that they truly deserve.

Playing the game is exhilarating. Players strive for the best, pushing to excel, feeling the rush. What keeps them going is not only their love for the sport but also the honor attached to being on the victory stand and bringing in medals and trophies.

One such sport is Taekwondo – a Korean martial art, characterized by its emphasis on head-height kicks, jumping and spinning kicks, and fast kicking techniques, with speed and agility, its defining characteristics. One team that is highly decorated and stands tall among its competitors is Pakistan Army Taekwondo Team (Girls).  Taekwondo is a martial art sport and so one usually associates it with men, but the Pakistan Army female taekwondo team is a testament to the fact that like many other sports, taekwondo is also one where women can excel. Their numerous awards are proof of this.

Most recently, the team won the thirteenth Korean Ambassador National Taekwondo Championship, held in Islamabad from November 2 -  8, 2018. The team has held this title for thirteen consecutive years now, along with the National Taekwondo Championship title that it has held since 2003. The girls in the team  have represented Pakistan in international events as well, like Asian Games, SAF Games, Islamic Asia Solidarity Games, Korean Open, German Open, etc. and every time, they’ve brought medals and trophies home.
In a recent meeting with the girls in this team, in the beautiful gymnasium of Army Sports Directorate (ASD), it was amazing to see how confident and self-assured they were. They ranged in age between 14 to 28 years and come from all over Pakistan ­— and not just the larger metropolitans. Some have come here after playing for different clubs and teams at the local level, while others have played for their provinces as well. Playing the game is exhilarating. Players strive for the best, pushing to excel, feeling the rush. What keeps them going is not only their love for the sport but also the honor attached to being on the victory stand and bringing in medals and trophies. And then, there is the pride of representing Pakistan at the international level. After all, how many can say they’ve represented their country? Asia Batool, 18,  from Sargodha, has represented Pakistan at international events like Islamic Games, Korean Open and German Open winning medals for her country. According to her and Syeda Sidra Batool Zaidi, 20, from Rawalpindi, who represented Pakistan at the South Asian Games, the rush of adrenaline when wearing the colour of her country is unmatched and gives an extreme sense of pride like no other.

Playing the sport has not only injected some much needed discipline in their lives and the skills needed to defend themselves in any untoward situation but also gives them confidence when going out into the world, as they have developed a more practical approach towards life. Naqsh   Hamdani, 17, from Karachi, feels that the sport has drastically changed her personality from being an extremely shy and reserved person to this self-assured and poised youth that could be seen today.
While the girls in the team are playing because of their passion for the sport, they’ve had to face at least some level of resistance from their families as well as society in general. However, they feel that once the people around them saw the laurels they were bringing in and the kind of environment the ASD provided, they were able to accept and even felt pride in what they were doing. “They start to look at us differently and their behaviour towards us also changes. It feels like they’re impressed. Eventually, they stop talking,” says Farseen Hamdani, 18, from Karachi, winner of 6 gold medals in her 8-years career.

It was invigorating to see that the eyes of the girls of the taekwondo team were sparkling with the anticipation of a future full of promise. This was largely made possible by  ASD which scouts talent when they are playing at the local, regional or even national level. Some girls have played in other teams but they feel their talent was honed and polished at the ASD. It not only provides them a safe environment to practice and train, which puts their families at ease, but it also provides them with the necessary facilities like professional coaches who determine the training patterns they need to follow. Their diet and medical needs are well  looked after. Since team members come from cities and towns all across Pakistan, they are bound to feel homesick because of, and in addition to, the stresses of training and trying to be the best at  what they do. Emotional support is provided not only by team members but also by coaches and management, who are always  there to help and support so that the girls could be trained to their maximum potential. This is the reason why the team have developed a strong affiliation with the institution and despite getting better monetary offers, they want to keep playing for the Army team.  Moreover, the professionalism, discipline and dedication of the coaches is unparalleled, according to the team, which not only polishes their skill set but also gives them psychological edge in the way they are perceived by their opponents while competing. What is most heartening, is the fact that the team did not experience any gender bias, as they get the same kind of training and the same level of attention as their male counterparts, even though they have as yet not been able to represent Pakistan at the Military SAF Games, where the male team is a permanent fixture. Moreover, even in their communities at home they experience the same respect and reverence as given to any male around them.

“They start to look at us differently and their behaviour towards us also changes. It feels like they’re impressed. Eventually, they stop talking.”

These girls not only excel at what they do but they want new and emerging talent to join them as well, and for this they even provide free coaching and training to girls in their hometowns, where many a times they are invited to do so by local clubs. They have many practical advices to give to girls who want to play any sport at a professional level. They feel girls should not let constraints like societal pressures and lack of support from family and friends keep them from achieving their goals and making their dreams come true. They also think that if one keeps working hard and believing in themselves, they can not only break the shackles that keep them from realizing their potential but they can also bring pride to their families and country. And on a personal level too they will feel different from the other girls; more confident, and better equipped to deal with whatever life throws at them. 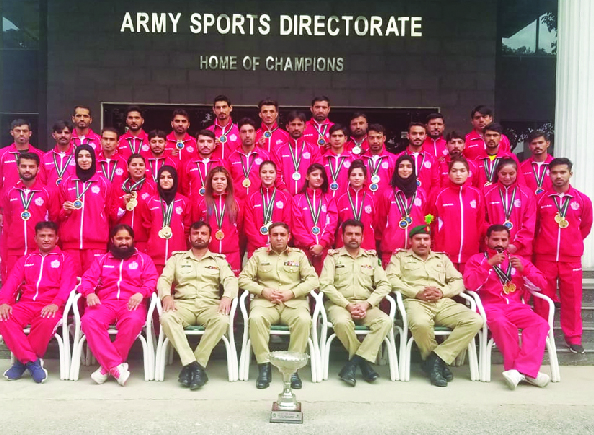 Competitive sports are more male dominated but women are doing great by bringing accolades and are becoming pride for their country. There is need for this to be brought into the spotlight so that new entrants into the field of sports can find inspiration and encouragement to pursue their dreams and know that nothing and no one can stop their ascent except for themselves. Pakistan Army is doing its part by encouraging, supporting and polishing raw talent of the female youth of the country. But it is imperative that we, as a society, also do our part in empowering our girls and showing more acceptance to those who are blazing bold, new trails.HH