Against All Odds Dr. Lozina Shoaib Takes on Life despite its Challenges

On Dec 4, 2009, armed terrorists burst into a mosque in Parade Lane, Rawalpindi and attacked on the worshipers who had gathered for Jummah prayers. Many lives were lost and many others transformed forever. One such person whose life was forever altered was Dr. Lozina Shoaib, who lost her father as a result of the attack. For 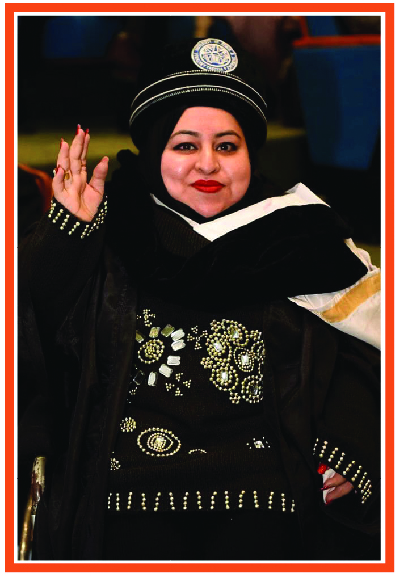 Dr. Lozina she had not just lost her father but also her greatest support, quite literally as she could not go about her everyday life in her wheelchair without her father’s help. Dr. Lozina is a special needs individual who depended on her father to help her fulfil her goals and objectives in life. So when her father was martyred, she suffered a huge setback. Suddenly she found herself without her feet.

However, adversity did not break her spirit. She refused to let the assailants kill her dreams along with her father. She continued on the path that led to the realization of her dreams, not letting her special needs define her and this is what makes her an inspiration for all Pakistani women. Ms. Lozina is embodiment of high spirits and confidence despite her physical condition. She powered through and has built a remarkable career, becoming a true role model for many people who feel restricted in making their dreams come true. Having undergone more than 20 surgeries, she continues to live her life to the fullest, and with purpose and dedication to her cause.
Dr. Lozina Shoaib has been recognized on many platforms and awarded National Youth Talent Award, 2008 conferred by Prime Minister of Pakistan on August 12, 2008, on International Youth Day, declared One of The Most Inspiring Ladies of Pakistan consecutively from 2007 to 2016 through a survey carried out on International Women’s Day and awarded NUST 4th Homecoming as a Role Model on March 2, 2019.
Hilal for Her had a chance to sit down with Ms. Shoaib, and learn about her life story. 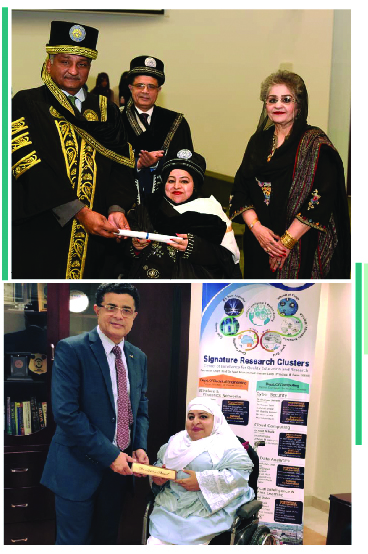 Who is Dr. Lozina Shoaib?
I really like this question and I’ll answer it in three parts: as Lozina Shoaib before and after her father’s shahadat and finally as Dr. Lozina Shoaib.
I was a highly motivated student, very confident, cheerful, and an outgoing person. I pursued MS in Software System and Engineering from Mohammad Ali Jinnah University, after completing my Masters in Computer Science (MCS).
I am the only child and very close to my parents. I like to say that I was pampered — perks of being the only child — but even then my parents did not spoil me. Alhamdulillah, it is a true blessing to have loving and supportive parents like mine. They have always stood by me, allowing me to pursue my dreams. My parents have always been my backbone and most of all, the reason why I have successfully surpassed every hurdle.
My father did not wish for me to work but my mother always dreamt that I should pursue a career. I was offered lectureship for two years and I accepted the offer but this was not what my mother had envisioned for me; she pushed me to grow. Later, I appeared in a mainstream regular examination for a government job and got selected. Unfortunately, Dec 4, 2009, my father Maj (R) Shoaib T.Bt was martyred in a terrorist attack while performing his Jummah prayer at Parade Lane Mosque, Rawalpindi Cantt.

I never thought of myself as disabled though I had a rare disability. But after my father’s shahadat, for the first time in my life, I felt as if someone had robbed me of strength and I was weak and feeble and the struggles of life had taken a very sharp turn.
Dealing with struggle became a norm. During this time, I started my PhD in Information Technology (IT) from National University of Science and Technology (NUST). I kept myself busy with studies and work. In 2015, another tragedy struck our lives and once again I felt helpless and afraid. My mother was diagnosed with stage three cancer. I thank Allah every day for giving me the strength to power through the rough phase, without it jeopardizing my PhD.
Today, Dr. Lozina Shoaib is an extrovert, matured into this strong, hardworking, practical woman.
How would you describe your journey and your experience undergoing 22 major surgeries?
My journey and experience because of my disability and surgeries I went through, was surely not a bed of roses. I was born prematurely, weighing 2.5 pounds on Nov 6, 1979. I was a critical case as my internal organs were not fully developed. I suffer from Multiple Congenital Contractures (MCC), Osteoporosis, Rheumatiod Arthritis and Cardiac problems. I have undergone 22 major surgeries as of today including spinal fusion and I have 9 more to go (involving hip and knee joints replacements), which are not done in Pakistan. My apparent physical condition (i.e. very short stature and fused body joints) has adversely affected my health and mobility, to the extent that I remain in unbearable state of pain round the clock. Even the highest dose of painkillers is ineffective. Dealing with my condition was definitely hard but this did not stop me. I attended regular school and attended my MCS on a stretcher.
There were though times but then again everyone has to deal with difficulty. I have learned that it is more important for a person to come out stronger on the other side than to stay in the darkness. I wanted to break stereotypes and I have achieved much more than people imagined I would. This makes me proud and allows me to look past the pain and struggle. 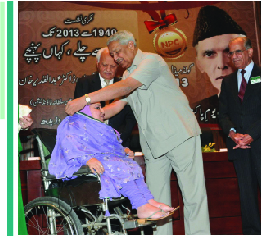 What are your aspirations?
I want to inspire and become a beacon of hope for people who suffer from similar problems. Creating awareness about disability movement for general public through media and by hosting talk shows and interviews to induce self-confidence in people with disability, gives me happiness. Hence, I host seminars for the disability movement.
I want to introduce and entrench the concept of inclusivity to general public where disabled and non-disabled people lead their own lives without being considered aliens. Creating awareness for disaster management and sensitizing Pakistanis about nationalism and patriotism are also my goals.

What motivated you to pursue PhD in Information Technology and write your thesis on ‘Learning Technologies for the Disabled’?
I want to see Pakistani children with hearing impairment not being dependent on sign language and to be given equal opportunities. The aim of my research is to replace sign language for beginners (infants) with an application which is operated on touch and visually describes the full meanings and have some Picture Exchange Communication System that will work on mobile devices or tablets.
The objective is to try to reduce their dependency on sign language because I want to create equal opportunities for people with hearing disability so that they can pursue all types of careers instead of being restricted to certain areas. This will not only help them gain confidence but also allow people around them to understand them with ease. For example, there was a well-known case where different NGOs gave jobs to the stone deaf at KFC. The project was not very much successful because it was difficult for people to adjust. But if such technology will be used in such projects, they will half  huge success because of less dependency on sign language by the deaf and for a layman who is unaware of sign language. Following need to be kept in mind to bridge the gap between the deaf and non-deaf.

In spite of the difficulties of managing a huge opposition, I hope to share some original ideas regarding replacing sign language.
Focusing on the positive is imperative, what made you focus on the positive when you felt lost?
Faith in Allah and positive thinking and attitude are the keys to success in life. My focus grew because I wanted to fulfill my Shaheed father’s dream and my mother’s desire of seeing me succeed.
What message would you like to give to young Pakistani girls who find themselves fighting a similar battle?
It is about time that people are sensitized about how to handle disability and disabled, as it is not a disease. Stop pitying them, start facilitating them! HH