In this interview with Hilal for Her, Justice (R) Nasira Javid Iqbal speaks candidly about her life, the progress and status of women in Pakistan. Justice Nasira, the daughter-in-law of Pakistan’s national poet, Dr. Allama Muhammad Iqbal, and wife of late Justice Dr. Javid Iqbal, the former Chief Justice of the Lahore High Court and a retired judge of the Supreme Court of Pakistan, carved out her niche by being one of the female pioneers in the male-dominated legal system of Pakistan.
She is also often invited by the media to share her expertise on socio-political and legal issues. As an eminent jurist, she has always been the supporter of women empowerment, human rights and education. Apart from her legal commitments, she is currently involved in a charitable school, namely, Gulistan-e-Saeeda, which is a non-profit organization focusing primarily on education, legal awareness and healthcare.

Q. What inspired you to study law?
To speak truly, resolving a family problem first introduced me to law and soon I realised that my knowledge of law was inadequate. My parents had donated all their money to make a charity hospital for children and women. This was a joint family business and others had to purchase those shares to invest in this noble purpose. The lack of knowledge about the law was the biggest handicap for me. So, it just occurred to me that I should take up law as my major. My children were young; I used to do all their work, from picking and dropping them to their schools, to their doctor visits and everything. My husband used to practice law and then he became a judge so I had to do all these things on my own. One day there was an advertisement in the newspaper about law examinations to be held next month with a Rs. 100 admission fee and I deposited the admission fee with the name of Allah. I bought the books, started studying and appeared in the exams. At that time, in early 70s, they used to allow women to take up law exams privately. So I took the exam and cleared the first part and followed the same pattern the following year for the second part. I secured 2nd position in my university in both the parts and stood 1st in many subjects as it was based subject-wise.

Q. What goes through your mind knowing that you have broken stereotypes by becoming one of the first five women to be appointed to the Lahore High Court (LHC)?
It was not only to the Lahore High Court but there were only five (5) women throughout the courts in Pakistan; one from Sindh, one from Peshawar and three (3) from Lahore and not a single one from Balochistan. They could not find any woman who had 10 years’ experience of Bar to become a judge. I had the required qualifications and was appointed on pure merit. As far as women law fraternity is concerned, it has come a long way. We have struggled and even faced male discrimination but today the position is much better. I’ve been teaching law since 1987 and there are many of my female students who are coming in this profession but many of these girls leave the profession. The attitude of men needs to be changed. There is some improvement because we have provincial and federal judicial academies these days. I’ve been going there to change the mindset that women have the same rights as men. They are half of the population and if their rights aren’t granted to them then this nation cannot progress or move forward. Quaid-i-Azam in his broadcast speech on Radio Pakistan, Dacca, in March 28, 1948 said, “In the great task of building the nation and maintaining its solidarity women have a most valuable part to play as the prime architects of the character of the youth that constitutes its backbone, not merely in their own homes, but by helping their less fortunate sisters outside in their great task. I know that in the long struggle for the achievement of Pakistan, Muslim women have stood solidly behind their men. In the bigger struggles for the building up of Pakistan that now lies ahead, let it not be said that the women of Pakistan had lagged behind or failed in their duty.”

Q. What was the biggest obstacle you had to face during your career?
I didn’t have any problems as such and the reason for it was that I started my career very late. I did my LLB when my children were in high school so there was no big obstacle except for the fact that my husband was a sitting judge and I didn’t want to start law practice because people would have thought that I’d be given an undue advantage. I had made a firm decision that I would not go to the court till he was practicing. He retired in 1987 and that was the time that I started my practice; and entered the court for the first time. By that time I had done my LLM. When my children were applying for their admissions in foreign universities, I used to sit and watch them. Then I also thought to apply for my admission as well. I sent my application to Harvard University and that was accepted. The children and I were all at the university at the same time. They were doing their undergraduate studies and I was pursuing Masters of Law from Harvard. I graduated and came back and women who wanted free legal advice would come to me. I became the honorary legal adviser at All Pakistan Women's Association (APWA) and Pakistan Women Lawyers Association (PAWLA).  I used to go to courts and would indulge in arguments so the people present there would follow me and ask me to fight their cases. However, I did not have my own office setup back then. So, I set up a small one room office near the High Court and it expanded gradually. I started my practice and I never faced problems except for the time when I used to win cases and men would think that I had taken their place. They only criticised because they felt threatened. Since I was older, I didn’t face any kind of harassment at workplace which young women face usually.

Q. What were the life lessons you learned from Sir Allama Iqbal and Justice Javid Iqbal?
It is very unfortunate that I could never meet Allama Iqbal, because he died before I was even born. My husband was 13 years old when he lost his father, and 9 years old when he lost his mother. When I got married, my sister-in-law was already married, so there was no one in the house except my husband and I, and I couldn’t learn anything from Allama Iqbal except for what we all could learn from his books. Naturally between husband and wife there is a lot of interaction and I learnt a lot from his habits and daily routine. Justice Javid was very tolerant, a forward-looking man and always encouraging. There are many things that one learns from a spouse and one of the things I was learning was respect for other people. I also must say that my husband shared the responsibilities related to our home. I started practicing law when he had retired and he would take the daily accounts from the servant, tell the cook what to cook, he would try to see that the rooms were neat and tidy and get all these things done in the house. He was even criticised for doing these mundane duties, which are usually done by the women, however, he would calmly reply to the people that sharing responsibilities is not a demeaning act and rather essential for a smooth family life. He wanted them to know that if they wanted to have a happy family then they had to share and care. He said that if he could do it then young men would know that they could do it, too; otherwise they would think that it was beneath their dignity. I think that made a difference. I remember he wrote his autobiography and he mentioned all these things. Women used to buy that book and get his autographs on it saying that they would present it to their husbands to know what the true relationship between a husband and wife is. We had a really nice time! 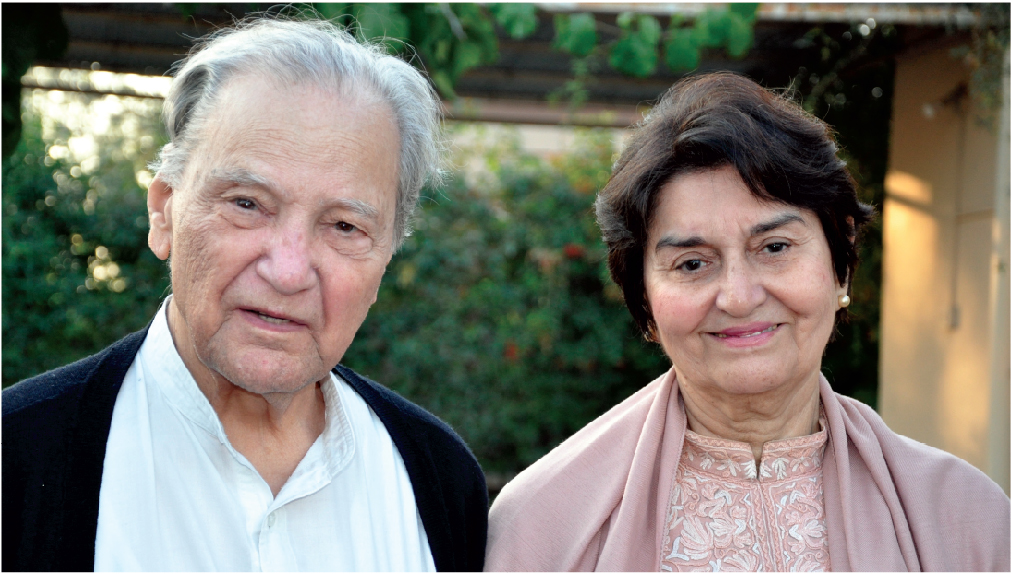 Q. If you have one piece of advice for Pakistani female youth, what would that be?
My advice would be never to fear in life. Show resolve and face all challenges with patience and fortitude. We also must send our girls to educational institutions. At home front, they must ask for equal and dignified treatment. However, this does not mean dominating others as that would disturb the balance and homely peace.

Q. What would you like to say to those who wish to follow your footsteps in the future?
Everyone can cut out his own paws. We can make difference, no matter how small our actions are, we must never be reluctant to take even small steps. I have opened a small charity school and I make sure the girls who are now in 7th and 8th grade should be taught sewing and embroidery etc. Because if a girl completes her matriculation and sits at home then at least she can earn some money using her skills. I remember that my mother used to ask all her friends to collect food and then distribute away among children in refugee camps. We all opened an ad hoc school for these children. I was assigned the duty of teaching them “lab pe ati hei dua”  when I had off from my school.  My duty was also to teach them the national anthem. These are the little things that also help a nation to develop. Take the responsibility of at least 3 or 4 children, buy them books,  buy them uniforms, take the responsibility of sending them to schools. This can be done by anyone. We cannot just say that it is the government’s responsibility.  The major change that we have to implement is that every family should voluntarily bear two children. I also have two children so I want to lead by example. This cannot be done through legislation because there would be resistance from various people. We have to do it ourselves. We have to take the initiative for things we want to change. I just want to reiterate that nothing is beneath your dignity and the work that you do with your own hands cannot be compared to idle gossiping. I believe that negative criticism cannot get you anywhere and only positive criticism will yield positive results; otherwise no one has the right to criticise. This is not the solution; offer a solution if you have one. You cannot just ask the government to do everything because what is the government? It is us, we have elected them so one should keep on trying to do something and find that it is the only way forward. If we want Pakistan to progress, then each one of us should put in efforts for the collective good of the community.