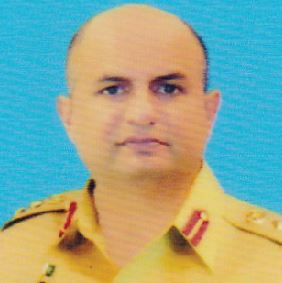 Sometimes, there are events which create a pause and silence in your life. There was a continuous buzz in my mind when I heard the interview of Lieutenant Nasir Hussain Khalid’s (shaheed) mother. Pretending not to concentrate while scrolling through my mobile, yet I was attentive to what she said. She is the widow of a police officer who embraced shahadat in 2001, a mother left alone at the tender age of twenty four, looking after her children; she sailed through oceans of struggle and brought up her eldest son. The boy passed out from Australian Military Academy with flying colors. “Mother, our days of worry are now over”, he said to her mother but fate smiled otherwise. On that fateful day, Lieutenant Nasir Hussain Khalid embraced shahadat during an Improvised Explosive Device (IED) attack, smashing the dreams of the young man, even so of his mother who is left alone to weather the storm. 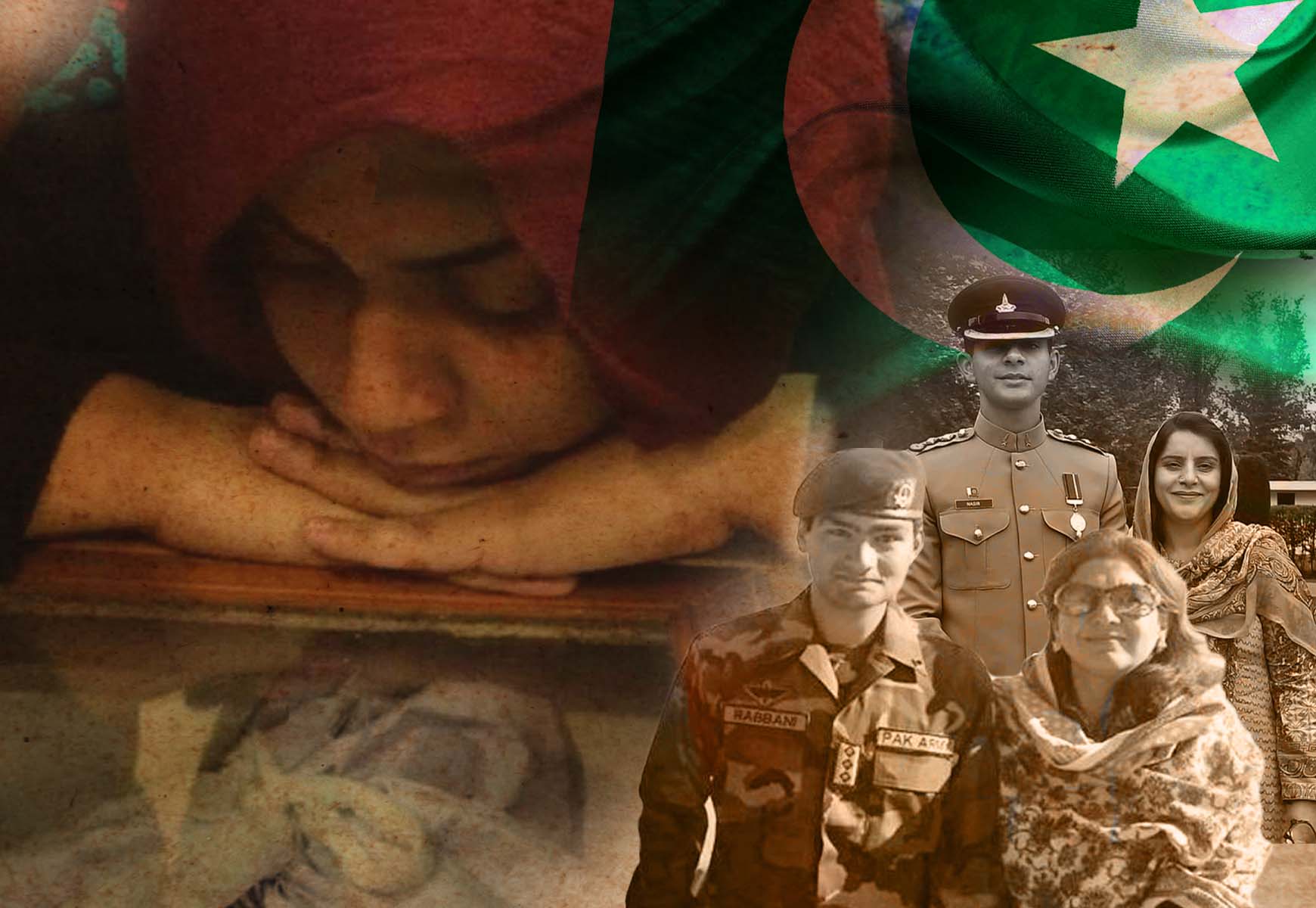 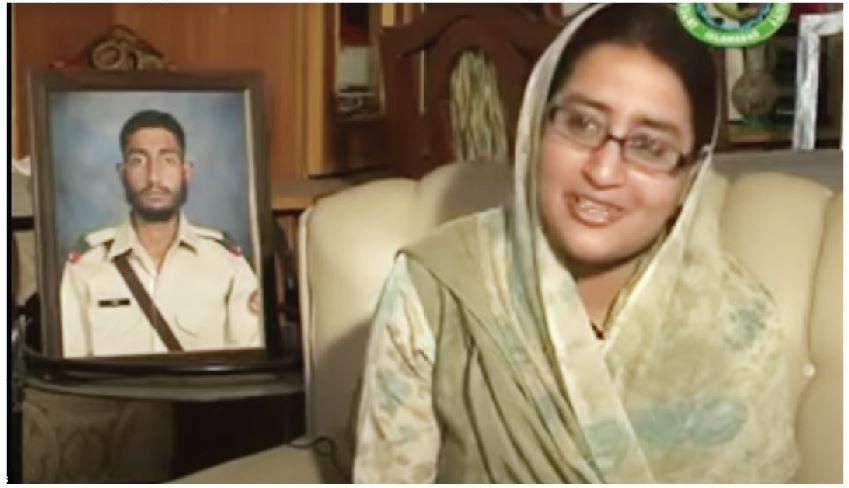 The reality of life is harsh but truthful. Men fight and die for the rightful cause. Their death is an end to the pain for them, but it’s everlasting for the loved ones left behind. “Give me good mothers and I would give you a great nation”, stated Napoleon Bonaparte. Allow me to add wives, sisters and daughters to the notion.
Mrs. Brigadier Muhammad Tariq Farid Khan, Mrs. Major Adeel Shahid, Mrs. Major Ishaq, Mother of Captain Akash Aftab Rabbani (shaheed), Mother of Captain Mearaj Muhammad Safi (shaheed), sister of Captain Salman Sarwar (shaheed), sister of Lieutenant Faiz Sultan (shaheed) and the list goes on, without a full stop. It is unimaginable and hard to believe their pain and sacrifice as we witness their narration.
Brigadier Muhammad Tariq Farid Khan died of cancer in 2017 while he was in service. Left with three daughters, his wife is still struggling, trying desperately to provide the finest possible environment to the dear ones. The plight and trauma of the daughters is not debatable. Mrs. Major Ishaq wept as she leaned over her husband’s coffin. Truly said by one of the Judges of Higher Courts, “I could not sleep the whole night after watching her wrapped around her husband’s coffin”. Many would have had experienced the same. Mrs. Major Adeel Shahid, a widow of two shaheed husbands, remarried after the shahadat of her first husband. Her first husband was Captain Mujahid shaheed and the second one was Major Adeel Shahid (shaheed). She is nurturing three little angels, one from her first and two from her second husband. The sister of Captain Salman Sarwar shaheed maintains a page on Facebook in loving memory of her dear brother. Her resemblance to her brother is amazing, so is her affection for the lost one. The sister of Lieutenant Faiz Jillani (shaheed) wept on the TV whilst explaining the preparation of her brother’s impending wedding, which could not take place. Her helplessness and desperation was at peak during the interview. 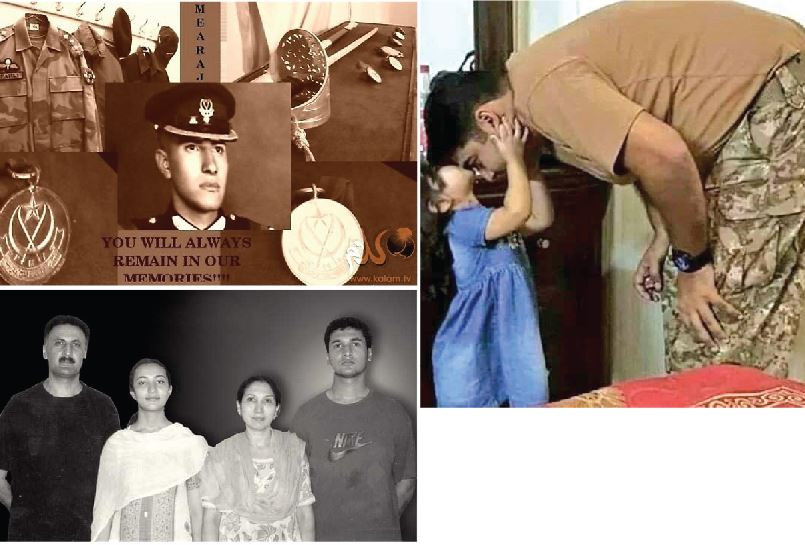 The mother of Captain Mearaj Muhammad Safi (shaheed) – a sword of honor recipient of his course – could not speak Urdu. She explained her emotions in Pashto, saying Alhamdulillah after the completion of every sentence. Except for her, everyone in the auditorium shed tears. Mother of Captain Akash Aftab Rabbani (shaheed) fills her void by posting every picture of Captain Akash. Sitting beside her son’s grave is a mountain to climb. Major Asif Raja (now Brigadier), a buddy of ours, whilst receiving Sitara-e-Bisalat (SBt), noticed himself standing alone in a crowd of 63 women, waiting to receive their bit given in recognition of their loss. Obviously, their fathers, husbands, sons or brothers would have had fallen. Correctly mentioned by an ironheart like Asif Raja, it was the most difficult moment in his life for controlling his emotions. Indeed, a challenging one for anyone with feelings.
Feelings are the essence of human beings. Sometimes it’s good to be emotional. Daughters, girls and women are an explanation of three sets. All three categories are three angles which are bolted with a military person. A military person falling translates into a fallout with different intensity on the said sets.
A curtain of silence falls between our “women of substance” and the society. Yes, our strong family system and the institution try to provide all possible support, which is in no way a substitute for their loss. For the world, the definition of women of substance may be different. For us, they are the actual women of substance, struggling with patience, will and an injured soul. Quietness and a humble node of affection are probably the only suitable recognition. Fight and keep on fighting as we stand with you, from this day till our last day on this heavenly earth.