Command and Staff Conference of Pakistan Navy was held at Naval Headquarters, Islamabad. The Conference was chaired by Chief of the Naval Staff, Admiral Muhammad Zakaullah. Matters related to operational preparedness, prevailing security situation and developmental plans of Pakistan Navy were reviewed. Chief of the Naval Staff was given detailed briefings on various ongoing and future projects and plans of Pakisstan Navy. 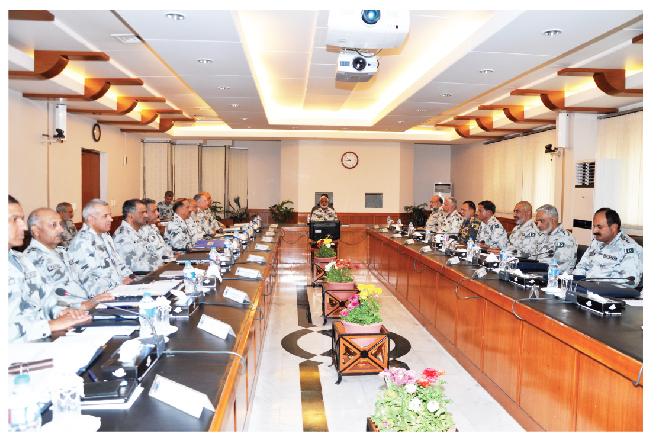 While taking stock of the prevalent security environment, Chief of the Naval Staff resolved that in the midst of complex, challenging and evolving contemporary security environment, Pakistan Navy would continue to play a significant role in sustenance of peace and stability in the Indian Ocean Region. The Naval Chief also reiterated Pakistan Navy’s unflinching resolve and determination to safeguard maritime frontiers of Pakistan against all threats. He also urged the commanders to remain at highest state of preparedness and maintain a constant vigil in their Area of Responsibility (AoR).

Chief of the Naval Staff lauded concerted efforts of all field commanders for successful conduct of Multinational Naval Exercise AMAN-17 at Karachi, in which 37 countries participated with assets and observers which was a clear testimony of the poise and confidence by regional and extra regional countries.

Besides assessing the war preparedness of Pakistan Navy, the participants of the conference also reviewed the priorities pertaining to the security of Gwadar Port and maritime components of CPEC.

Pakistan Navy conducted successful test launch of land based anti-ship missile. The missile has advanced technology and avionics, which enables engagement of targets at sea with high accuracy.

The trial was conducted from coastal region and missile secured hit on the target placed at sea. The event was witnessed by Vice Chief of the Naval Staff, Admiral Khan Hasham Bin Saddique. Senior officers of Pakistan Navy were also present on the occasion. Vice Chief of the Naval Staff commended the successful accomplishment of the objectives of this trial and lauded the hard work and efforts of all those who were involved, especially crew of the missile unit.

Chief of the Naval Staff, Admiral Muhammad Zakaullah, in his message, felicitated the officers and crew and said that 'this weapon system has added a new dimension in the operational reach of the Pakistan Navy as Pakistan Navy would be able to further bolster seaward defense of the nation by having the capability of launching long range anti-ship missiles from land.'