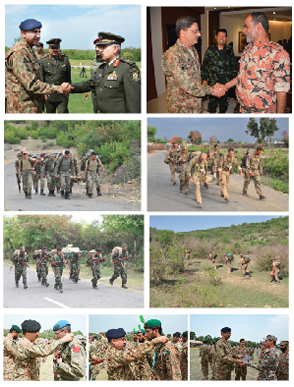 The foreign teams entered the competition where they were tested for their physical fitness, endurance and team spirit. Team Spirit is a narrative based competition held under very challenging environment. A patrol from every participating team is tasked to infiltrate in terrorist infested area, carry out a task and exfiltrate.

COAS interacted with foreign teams and highlighted importance of physical fitness and spirit of team work. COAS said that 'terrorism is affecting the whole world and requires collective response approach. Pakistan is a peace loving country and has significantly contributed towards peace and stability. World acknowledges our efforts in this regard and your presence here is the evidence. Those who propagate to isolate Pakistan should see how Pakistan is actually valued and honoured by our global friends.' 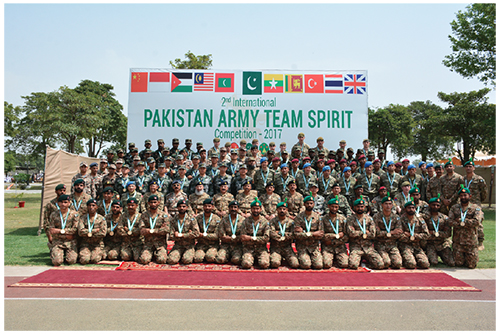 Lieutenant General Ikram ul Haque, Commander Gujranwala Corps who was chief guest on the last day of the competition awarded prizes to the winning teams. While congratulating the winners Lt Gen Ikram ul Haque applauded the professionalism, dedication and skills of the participating teams. He said that 'participation of teams from friendly countries offored an opportunity to all the participants to learn from each other's professional experience in the domain of counter-terrorism.' He thanked all foreign military teams for participating and showing confidence in Pakistan. Lieutenant General Hidayat ur Rehman, Inspector General Training and Evaluation and Lieutenant General Azhar Saleh Abbasi, Commander Mangla Corps were also present on the occasion.