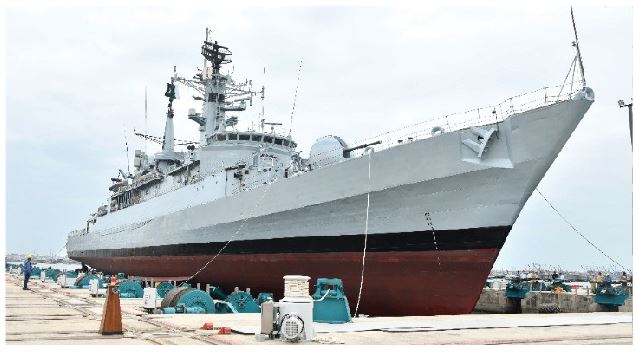 The contract of the Ship Lift and Transfer System was signed under the auspices of Ministry of Defense Production with the funding provided by Planning Commission of Pakistan, as a PSDP project. The Ship Lift and Transfer System will provide docking and repair facilities to marine vessels up to 7300 ton. At one time it can accommodate 12 ships. The facility will contribute to the productivity of Karachi Shipyard and Engineering Works and will fulfill the ever increasing demand of the shipping industry in the country. The works generated by enhancing the ship repair capacity will outflow to the public and private industrial sectors.
On the occasion, the honorable Chief Guest congratulated Karachi Shipyard, Pakistan Navy and Ministry of Defense Production for setting up such a modern facility in Pakistan. He said that now Karachi Shipyard will stand taller in the regional maritime picture. The Prime Minister considered this facility a gift to the Pakistani nation on its 75th Independence Day.

The Prime Minister emphasized that the government is committed to support the local industry and is working on friendly policies to enhance shipping and fishing in our waters, enhancing the business for Karachi Shipyard. He said that this facility is a true testament of government’s efforts towards industrialization, capacity building and self-reliance. He hoped that the drive towards higher grounds will continue in the future and the facility will be used to the fullest in the role envisaged by the planners and maximum benefits will be accrued from the investment for poverty alleviation. He hoped that SLTS will be remembered as the precursor of the revolution his government is endeavoring for in the maritime sector.
MD KS&EW Rear Admiral Athar Saleem in his welcome address said that the project envisaged an increase in the existing ship repair capacity and efficiency of Karachi Shipyard.

He said that the system brings in a revolutionary concept against the existing docking technology, which can, at the moment, handle and repair only one ship at a time. Advantages of the new facility are that a ship can be recovered from sea, transferred to any of the repair stations and the Ship Lift can then be immediately available to lift/lower the next ship thereby increasing productivity exponentially according to the number of available parking spaces. This will significantly increase Karachi Shipyard’s revenue thereby generating high tax returns and more job opportunities for locals.