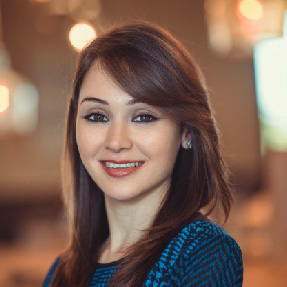 Nadia Hussain — She’s Got It All Covered!

adia Hussain is the epitome of woman empowerment, an artist at heart and skillfully makes appropriate use of her aesthetic intelligence. She’s not only one of the top models of Pakistan but also an aesthetician, a dentist, a successful entrepreneur, a television host, an actress, a designer and an extremely hands on mother of four. In my recent one-on-one with her, I developed a fond liking towards this ambitious and accomplished lady and came to the conclusion that there is nothing that this superwoman cannot accomplish.
Upon asking what her ambitions were while growing up, she replied, “When I was young, I wanted to be a scientist; I loved experimenting, discovering and exploring. I took science as my major in my O and A Levels and passed with flying colors. Being a cosmetic surgeon was my dream but that meant devoting five years of life to MBBS and then specialization. My mother knew I had the ability to take up multiple professions, so she guided me to opt for BDS.”

On inquiring what made her step towards the glamorous world of modelling, Nadia explained, “After I finished my A-Level, I felt idle sitting at home. I was a go-getter and sitting at home felt like wasting my time so I applied and became a substitute teacher at a school. A friend of mine who was working in an advertising agency reached out to me for the winter campaign for Lakhani Silk Mills. They were offering me a very good package because of which I jumped at the opportunity. My mother was slightly reluctant but after meeting the team and the agency, she was satisfied as she knew I was in good hands.” She further added, “Hearing about this project and looking at all the billboards, Shamaeel Ansari, who was my aunt’s friend, approached me for a fashion show which became my first fashion show and since then, I never looked back.”

Even though she had entered the glamour world, Nadia did not give up on her education. Nadia shared, “A few months later, I started college. It was not easy but I managed through most of my projects while at the same time studying and making the efforts to become an established dentist. Due to the stereotypes attached with models, the faculty used to judge me. However, I did not let any negativity bring me down since I had a strong family background and my family always had my back, I stood strong through difficult times. It was never about proving something to anyone instead it had always been my motive to achieve what I had my heart set on. That is something I would suggest to young girls as well; believe in yourself and you can break all mental and physical barriers. Women have the capacity to do a lot more than we are aware of. Only we can explore our true potential and bring out the best of it.”

Nadia refused a lot of work and was extremely choosy in accepting projects as she did not want her education to be effected in any way. She said, “My parents had set a line and told me to make sure my grades never suffered due to my work in the fashion world. Even when I entered television, one of the directors literally waited for about three to four months until I was finished with my mid-term examinations. The project he offered was very challenging, I had to study and attend college in the morning and rush straight to the shoot afterwards. Later at night, I had to finish my pending work and assignments. Eventually, all the hard work paid off. I ended up graduating with distinction, which was an achievement in itself. I am fortunate that I had the drive to do both things together and I have learnt that if we are motivated and we act accordingly, we have the potential to do wonders. I enjoy multitasking and I preplan everything so that I never feel exhausted or stressed. I remember taking my first born to a few shoots with me. It didn’t ever take a toll on me. Handling the situation, troubleshooting and making life easier not only for yourself but for everyone around you is the key!”
A few years ago, Nadia launched a brand of shoes, lawn and then she moved towards opening up her own salon. Now, she has reached a phenomenal level where she is setting up another branch of ‘Nadia Hussain’ salon. Along with that, she is running her dental clinic. Recently, Nadia also introduced a range of make-up products which was something she has always been very passionate about. She is all set to start working on her next project, a make-up academy for individuals who are keen to learn and grow in this field.
On how she handles herself in her professional life, Nadia said, “Amongst my cousins and close friends, I was always the group leader. However, I only imposed myself on a small group of people. In a larger group, I never used to make much of an effort to mingle or interact. I became an extrovert at a much later stage in life. This particular characteristic helped me a lot in my career especially around male colleagues. People knew that I was not a person who was very easy to please or impress. I mostly kept to myself, especially, around people I did not know personally. I never lowered my guard for people who were not respectful. In my point of view, each woman should draw a line she does not want people to cross. We all have the right to have our privacy, which should not be invaded at any cost.”
Nadia Hussain is the perfect example of a woman conquering every field she sets her foot in. Unstoppable, a go getter and a woman with never-ending dreams and plans, Nadia wrapped our conversation with an exceptional message for the youth of Pakistan: “With our will, we can make anything happen — that is the power of devotion and dedication so before it is too late, choose what you want for yourself and just start working on it with courage and ambition. If you believe in yourself, no one can ever stop you.” HH