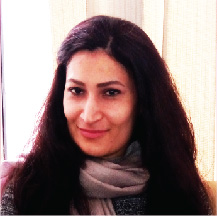 When Mehwish Ekhlaque used to ride the motorbike occasionally with her husband sitting behind her, she had not thought that he would leave her soon and her desire of bike riding would become her passion and profession later on in life.
Her husband, Ekhlaque Ahmed, taught her bike riding on his motorcycle when no woman could think of riding on the roads that were still not familiar with female riders. Her journey as a professional bike rider started when her husband left for his eternal abode. She did not let the hope die with him and turned adversity into opportunity.

The journey of Mehwish, CEO of Throttle Inspiration, though lonesome and full of struggle, is a source of inspiration and strength for others, both women and men.
Mehwish was always a self-sufficient woman. Even as a student she bore her educational expenses herself by teaching other children because she had a big family with nine siblings.
She got married in her teens, right after doing Intermediate. Her husband who was working in the education department in Karachi supported her to continue her studies. “He used to wait for me for hours when I sat in the exams for my graduation in Karachi University,” Mehwish recalls fondly.
Once while riding with her husband she expressed her desire to ride his bike. Initially, he was reluctant as it was the weirdest thing to do in the absence of any precedent but later he taught her how to drive his bike.  “Occasionally, I used to ride the bike with my husband sitting behind me when we had to visit relatives, the market or just for a joyride. It was an unusual sight for the people of Karachi in 2007. I saw people giving the thumbs up or colliding with each other while watching me riding.”

But life changed when a cardiac arrest took her husband away in July 2012.  Sudden loss of a loving and caring life partner at the young age of 21, was devastating for her. But she faced this tragedy with strength and very soon overcame her grief and took charge of her life again. She completed her Masters degree in Education after her husband’s death and started her professional life as an accounts officer in a marble factory. To avoid the commuting issues of public transport, she started using her husband’s bike.
Later, she got a 110cc Honda Scooty imported from Malaysia. Gradually she started purchasing heavy bikes as her interest in bikes grew. To practice driving she would visit Sunday Track, Do Darya, where she interacted with other bikers who motivated and encouraged her to go out of town on longer rides.
Male bikers were supportive and gave her practical advice and soon she became a part of a riders’ group who used to go for morning rides and explore different sites.  Working in a mechanical factory also helped her understand machines and gave her the basic know-how about bikes. She also started participating in different rallies that used to be dominated by men.
Watching Mehwish riding on the road with confidence encouraged other women who came forward to learn bike riding to use it as a mode of transportation. When she was approached by other women desirous of bike riding, she started a venture with a motor company and started a business named Throttle Sisters. She trained more than 2000 women riders in Karachi, Hyderabad, Rawalpindi and Islamabad.  She has been leading a group of women bikers that organizes rallies occasionally. These ladies are from different walks of life and varying ages.
Now she has started her own showroom – Throttle Inspiration – in Rawalpindi, which offers all kinds of bikes with imported safety gears. It is open for all but she only teaches riding to women. Bike lovers and travellers from across Pakistan seek her advice about any bike and what kind of bike would suit for which route.
In the 2017 National Motor Rally, she was the only female rider out of 300 bikers, hundreds of jeeps and vintage cars that travelled from Khunjerab to Gwadar.  The rally covered more than 3000 km distance in 9 days on routes which were relatively less explored and less developed, and a bit risky too for a women travelling alone.
“It was a bit scary when I could not keep pace with other riders while passing through areas like Zhob, Panjgur, South Waziristan, alone. So I tried to disguise myself by hiding my hair, keeping a straight back posture and wearing Dot-approved helmet, protective gloves, mask, knee and elbow pads, and shoes, so that the bystanders  may not know that a woman was driving, to avoid any mishap,” she says talking about the rally. “When they stopped to smoke or drink I rode so that I could keep pace with other bikers and did not stay behind in remote and deserted places,” she says.

In a rally, during long distances of 400 km or more, she had to reduce her water intake because of lack of washroom facilities on the way. It could have led to dehydration. But this is not the case with men who usually can answer the call of nature anywhere. “Men and women have different physical stamina,” says Mehwish, “but participation in rallies demand highest standards of physical fitness, stamina, determination, and mastery over handling the bikes regardless of gender. And there is no relaxation of rules, or preferential treatment for women. And when you are in a competition with others they never let you get ahead. ‘You can’t do this. This sport is not appropriate for women,’ that kind of thing you hear,” she said talking about the challenges she faced. “People try to overtake you and make you fall so that they can get ahead. They feel threatened so they misguide or let you down so that they can lead the field. A renowned national rider had asked me not to participate in a rally so that he could be in the leading position,” she continues.
“It’s a dangerous game even for men. Many back out of the competition in the middle,” she says. “But I like challenges.”
So far the credit of her achievements goes to her only as she has travelled and made her name at her own expense. But now she wishes that she should be given some travel card so that she could travel and explore other cities on discount.
Now there are many women who are bike riders or drive Scooty but it was Mehwish who started a trend when it was unheard of in Pakistan, and most of the women riders are her students. Riding in groups is empowering for women but they are not connected with one another. There are hardly any opportunities for women as sponsors don’t support them and families also don’t allow for it.
There should be some incentives so that women start riding more on their own for travelling and use their bikes as a transportation source instead of relying on their families. There can be women’s rallies like the rallies held for men.  As it is a risky sport and people get hurt, so there should be a healthcare cover, too.
“I want to participate in international rallies and want sponsors and the government to support me,” she says, “I was recently conferred an award, the Pride of Sindh, but I want to be the Pride of Pakistan.” HH

The writer is an Islambad based journalist who writes about health, education and economy.
E-mail:[email protected]