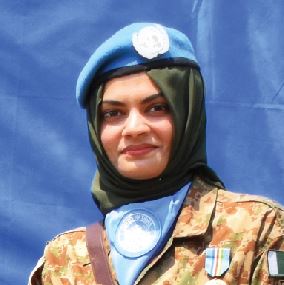 It was the very first day of 2020, when I received a letter my selection for United Nations Multidimensional Integrated Stabilization Mission in the Central African Republic (MINUSCA). I was going to be a part of the first ever Pakistani Female Engagement Team (FET) there which comprised of fifteen Lady Officers (LOs). 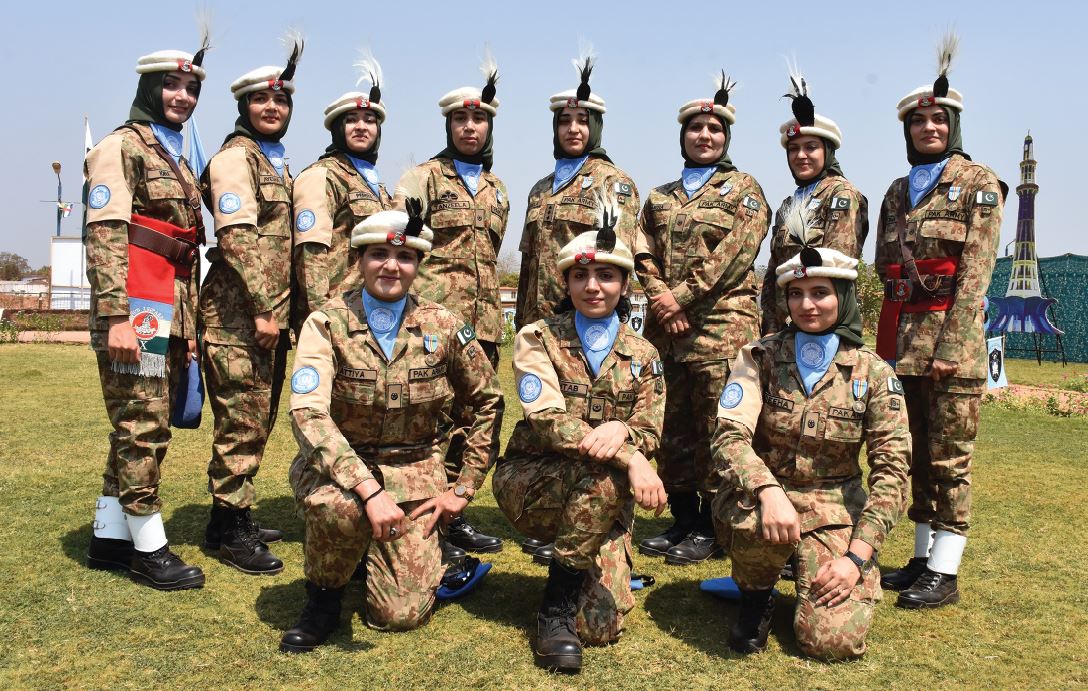 MINUSCA has been monitoring the peace process in Central African Republic (CAR) since 2014 and Pakistan has been participating since 2015. So far, seven Infantry Battalions, seven Engineer’s Companies and six Aviation units have participated in the mission. Over a period of time, it was realized that since more than 50% of the country’s population comprised of women and children, the human rights violations, including gender discrimination, torture, rape, looting, forced enslavement and lack of basic facilities, common in CAR affected them the most. Therefore, UNSC decided to appoint MINUSCA to deal with these subdued segments of the society, which required well trained female peacekeepers with specialized skills for productive and effective engagements.
In March 2020, the world witnessed history in the making. Fifteen women from Pakistan went to CAR and represented their country in combat uniform. It was a unique group not only in terms of variation in their professional capabilities but they also had the distinct honour of being Pakistan’s first FET. Their profiles were as diverse as their skills. It was indeed a well-rounded team that comprised of technical and medical officers, gender and legal advisors, stress counselors and vocational training officers. 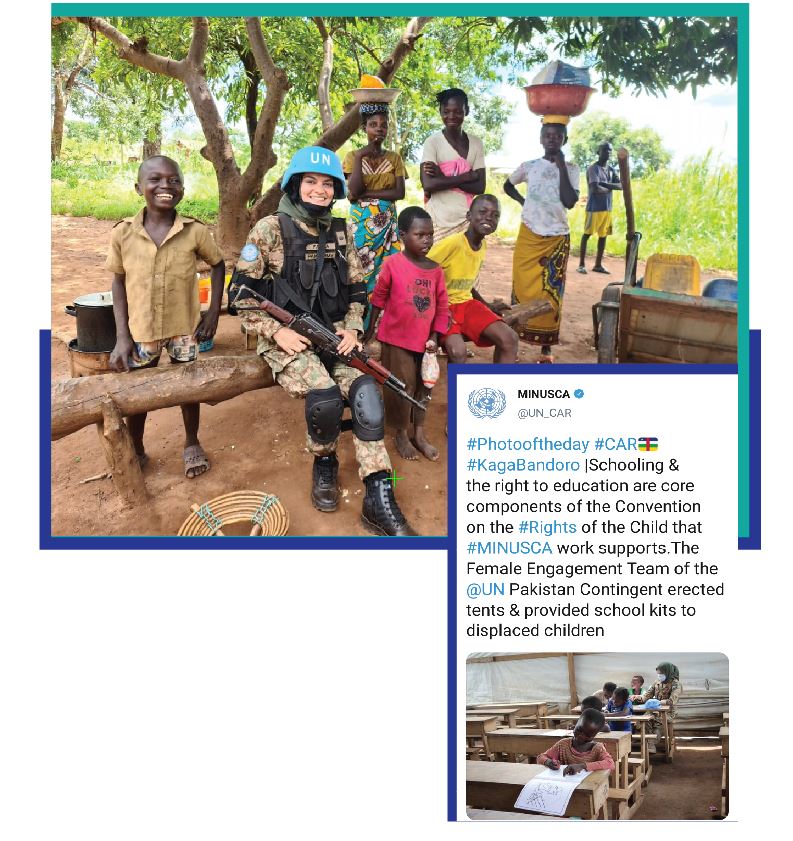 On the day of departure from Pakistan to CAR, I was overwhelmed with mixed emotions — sadness over leaving my children, fortunate to serve under the UN flag, proud to be a representative of my country. Belonging to GB, I find myself very lucky to have been deployed with 10 Northern Light Infantry Battalion. The presence of people from GB gave me a homely feeling away from home. The FET was given separate accommodation called FET Complex. There, we had a separate mess, gym and a badminton court, and to witness the blue skies a ‘Maggie’, where we spent most of our spare time. In the initial days everyone worried about how they would be able to spend 365 days away from their families, but slowly and gradually, we streamlined our daily activities of the mission and started enjoying our spare time. When we were not busy patrolling, participating in community engagement activities, etc., it felt like we were living in a hostel; leaving behind the hectic routine of a working mother, we started enjoying the diet plans, gym, badminton and listening to a variety of playlists, etc.
Time seemed to pass at a steady pace. Our team leader, Maj Fatima Shaukat, always came up with bright ideas to serve humanity in a better way. In order to develop skills for the underprivileged men and women, two Vocational Training Officers (VTO), Maj Ayesha Sharafat and Maj Perniya, worked dedicatedly and successfully delivered the sewing cadre at the Internally Displaced People (IDP) camps. Similarly, medical officers and paramedics did their best running medical camps and health awareness campaigns regarding COVID-19, malaria and other diseases. Our stress counselors engaged the locals by providing art therapy and lectures regarding mental health. Legal advisors also did their best to educate women and children about protecting themselves from mental and physical abuse. From sitting in front of a computer screen for the past eleven years to wearing a bulletproof jacket, carrying a G3 rifle along with a blue hamlet that weighed 2 kg for mixed patrolling under the scorching sun is an experience of its own kind. The misery and suffering of the people in this region in general, and of women and children in particular, was evident when we patrolled the streets. The spark in their eyes, however, was unique and it always lit up my face when they cheered upon seeing us.
Our infantry battalion frequently arranged events that were followed by mandatory Dumpukht for dinner. Fellow foreign military personnel were also invited to join in the fun and being a computer qualified officer, it was my duty to download and display videos that reflected a softer image of Pakistan. Our foreign friends were mesmerized by the lush green valleys and snow covered mountain peaks of Pakistan.
Six months passed by and finally the rehearsals of the Medal Parade ceremony started. My father has always been fond of military parades. When I was young, he always made us watch the 23rd March parade on the television. He had tears in his eyes when he witnessed my passing out parade and when I participated in the 23rd March parade at Shakarpariyan Parade Ground, Islamabad.  Capt Iqra Ahmed, our very motivated AFNS officer, and I volunteered to participate in the UN Medal Parade. It was quite hectic and stressful as I found myself in the parade ground after a long break. Daily practice and rehearsals brought back sweet memories of PMA and it was a proud moment when I stood in front of the squad under the green flag.
It is the beauty of Pakistan Army that it equips its soldiers and officers to encounter all types of circumstances, and perform against all odds and in diverse situations without any gender disparity. Prior to awarding of the medals, Maj Ayesha Sharafat — Master of Ceremony — read out the UN medal citation to the medal recipients. Indeed, it was a matter of great prestige to be a part of the Pakistani contingent chanting Allah-o-Akbar and to have been given a chance to represent my beloved country in a foreign land.
It is said that, behind every successful man is a woman. But I would like to rephrase it to ‘behind every successful woman is a strong family support system, spouse, and parents who are confident in her abilities’. It is because of our families that we have the confidence to plunge into this adventure, to dare and to dream big. I am proud of all those who support their wives, daughters, sisters and mothers as it is because of this support that an LO is able to perform so well in the mission area.
I can confidently say that all officers from Pakistan Army are committed to the cause of peace around the world. Our devotion to the people is evident through our countless efforts. UN staff has also appreciated the efforts of female Pakistani peacekeepers. Our hard work has received non-stop applause, tweets, articles, exhibition at CIPS, visit by the honorable UN Secretary General, etc. Nevertheless, our greatest source of pride are the smiles on the faces of the local populace who wave at us with matchless love and the greatest reward is when we hear them chanting Pakistan Zindabad! HH