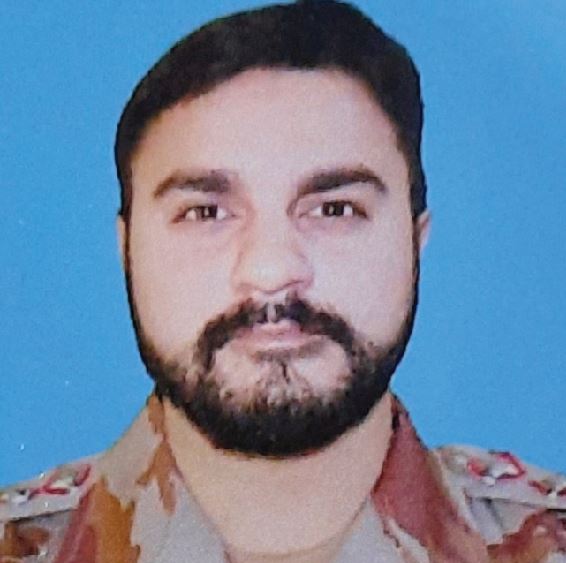 Asmartly turned out contingent in full ceremonial uniform fired a volley of gunfire and the bugler sounded the tune of the "last post", leaving the complete area in an eerie silence. It was the last tribute that the army pays to a fallen comrade. Yes, it was the scene of a military funeral, and the man of the moment who had ascended beyond the earthly realm after fighting for his country valiantly and embracing shahadat was Captain Muhammad Saad Bin Amir of 131 Self Propelled Regiment Artillery. For many, the story ended there, but for me it was just the beginning, because unlike many in the crowd, not only did I share his name but I was also fortunate to share an unbreakable bond of being his coursemate.
Captain Muhammad Saad Bin Amir Shaheed was born on April 7, 1996 into a military family. He only had one brother who is also a serving Captain in the army.
Saad grew up in different cantonments across Pakistan. Unfortunately, at a very young age, his father passed away due to cancer and he was left with the burden of caring for his mother and brother, an event which inculcated a remarkable depth and compassion in his personality that all of his peers felt later. His mother, a teacher by profession, taught at the local school in Rawalpindi and did a very fine job of raising her sons without their father.
From early on in his life, Saad was motivated to join the forces. After his FSc, he joined COMSATS University, Islamabad, and concurrently tried his luck in joining Pakistan Air Force where he was not selected due to medical reasons. He applied for the Technical Graduate course later and was not selected again. Bigger glory was waiting for him. Saad was not a person who would give up on his dream easily and he continued his university education for two years with the conviction of trying his luck again for the army. In 2016, he applied and got selected in 138 Long Course. Destiny had arranged our meeting.
My association with Saad began on that crisp and cold Kakul afternoon in November 2016 when we both reported to Pakistan Military Academy (PMA). As I walked to the reception after all the formalities and paperwork, I found myself walking towards this person whom I instantly recognized as someone mature and someone who would understand the apprehensiveness that I was experiencing. That was GC (Gentlemen Cadet) Saad from Tariq Platoon who then became the first person I met in PMA. I remember being nervous about what lay ahead, but he was calm and told me not to worry about it. I wondered how he was so calm and he seemed to be wise beyond his age.
As the time passed and our training commenced, I saw him frequently during drills, weapon training and classes and there always was a certain aura around him and a certain depth to his personality. His platoon mates remember him as someone very wise and mature and as per PMA norms, he was called Sir Gracy owing to his attribute of always being a reliable person as well as a helping hand for anyone who needed assistance. He was always different, always imparting wisdom and advice beyond his age, something that had perhaps been inculcated in his personality due to becoming an orphan at a young age. He displayed commendable performance during his training in PMA and was a very upright cadet and an infrequent guest of the GC office unlike his other platoon mates.
His instructors also remember him as someone obedient and willing to go an extra mile to perform the assignments. His hard work was rewarded and on October 13, 2018, Saad crossed the Red Stairs and joined the fraternity of officers. He had accomplished his lifelong dream of becoming an officer. He never let any obstacle stand in his way despite two years of university and repeated failure at joining the forces, his ultimate aim never changed. 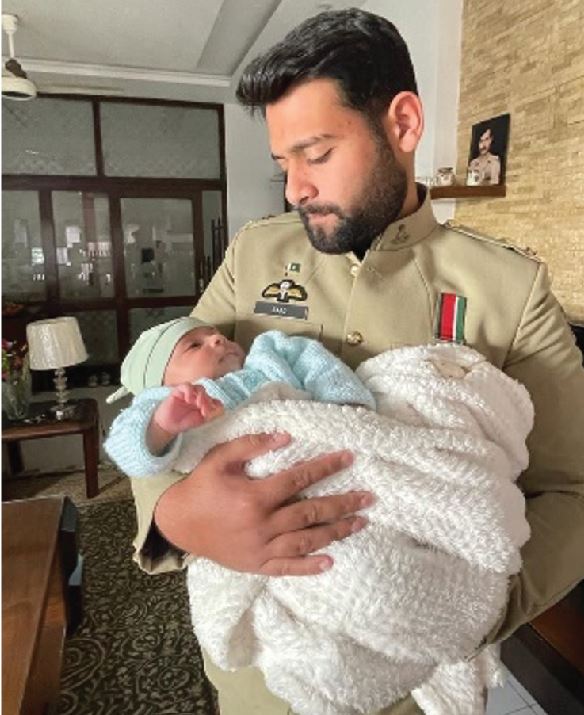 He was happy since he joined the very regiment in which his father had served. The second generation was ready to carry on the legacy of the elders. His first Facebook post after passing out very proudly said, "I became a successor of my father and I will continue from where he left, so mother as promised vekh tera putar laftain ban gaya! (see, your son has become a Lieutenant)".
Upon reaching the unit in Bahawalpur, he was fortunate enough to meet an outstanding officer, Captain Aqib Javed, who took him under his wing and guided him through all the norms and customs of military life. Captain Aqib was like a mentor to Saad. He was very impressed by Captain Aqib and wanted to emulate him.
Captain Aqib later embraced shahadat in July 2019 while serving in Frontier Corps (FC) Balochistan and Saad was devasted at this loss. He made it a point to always take care of Captain Aqib’s family. Little did anyone know that the mentor and mentee would both embark on the glorious path of shahadat and Saad was to follow in the footsteps of his mentor in March 2022 while serving in FC Khyber Pakhtunkhwa (KP).
After serving in his regiment and undergoing all the basic military courses, Saad was posted to FC KP in Razmak in 2022. There, he again proved himself as a wonderful officer and performed his duties in a befitting manner that is expected of a gunner officer. He served on multiple appointments and carried the workload of his wing upon his shoulders and was always up to the task. In the meanwhile, Saad also got married in 2021 and was blessed with a daughter on December 24, 2021, whom he named Arwa.
She was the greatest joy of his life and he doted on her for every moment that he was with his family, often showing her pictures to his fellow officers who greatly appreciated the love he had for his family. In the last call he made to his mother before shahadat, he requested for a picture of his daughter before he left for the operation.
On March 29, 2022, Captain Saad went for reconnaissance of a troubled spot in his area of operations. After successfully carrying out the assigned tasks, he was on his way back to his wing when he came under severe terrorist fire. Disregarding his personal safety, he helped all his men get to a secure location and engage the enemy that was giving a fierce resistance. The battle raged on for nearly an hour and during this time while they were under fire, Saad observed that the enemy was starting to come down from the slopes of the mountains that they were firing from. His first concern was that of the 21 men that were with him. Time was running short and therefore, Saad devised a plan to extricate his men from the ambush. Using a vehicle as a cover and providing covering fire, Saad managed to get his men to a relatively safer area despite constantly being under fire. Meanwhile, the terrorists identified him as someone who was in charge and started firing towards him. During the heavy exchange of fire that followed, he was hit by 3 bullets and embraced shahadat, thereby exalting himself to a place many people only dream of and claiming for himself the highly prestigious title of a shaheed and also following in the glorious footsteps of Captain Aqib, his adjutant. The mentor and mentee were reunited in heaven!
The news of his shahadat sent shockwaves amongst us, his family and friends, and they rushed towards his house to be with his family and to share their grief. His funeral, that was held in Rawalpindi, was attended by a huge crowd, many of whom had never seen him or met him, but were brought to the place by his valor in the face of fire and his status of a shaheed. The crowd was emotionally charged and at one point, the subedar commanding the funeral contingent had to intervene and tell the people, "Humain apnay kaptaan saahab ko pooray aizaz ke saath rukhsat karnay dein (Allow us to give a befitting farewell to our beloved Captain).
I was there at his namaz-e-janaza (funeral prayers) and was among the people who saw him being lowered into his grave. As I saw his face for the last time, my thoughts rushed back to that crisp and cold Kakul morning where I had met Saad for the first time. Never could I imagine that our worldly association would be so short, nor did I contemplate bidding so early a farewell to the man who was a source of inspiration for his peers. It is so hard to say goodbye to buddies with whom you have rubbed shoulders during training in Kakul and Infantry School, Quetta. He now laid in front of me, resting, after living a brief life. He was ready to meet his creator!
As the crowd had left after his janaza (funeral), I sat beside his grave and recalled all the officers I've had the privilege of knowing who have embraced shahadat, many with whom I've spent time in the academy. But this felt different, because this person was my coursemate. we shared the same name, and this loss felt really personal. As I walked away from his grave, the famous couplet of Laurence Binyon came to my mind which I felt was befitting for the moment I had just experienced:
"They shall grow not old, as we that are left grow old:
Age shall not weary them, nor the years condemn.
At the going down of the sun and in the morning
We will remember them".