Syria, Turkey and the Kurd Issue

Roughly 25 million Kurds occupy a tract of land that includes parts of Turkey, Syria, Iran, Iraq, Azerbaijan and Armenia but they have no state of their own.1 In 1920, the Kurds as an ethnic group were promised autonomy in the Treaty of Sèvres. But the two great powers of the day, Britain and France, reneged in 1923 and carved up the Kurdish territories into modern-day Turkey, Iran, Iraq, and Syria.2

With YPG getting stronger amid U.S. military withdrawal from the region, the Turkish military on October 9 launched military operation named “Operation Peace Spring” in SDF controlled northeast Syria. The aim of the operation is to create a 20 mile broad buffer zone from Afrin in the west to Iraq in the east. Turkey believes that by creating this zone it could prevent the Syrian border from becoming like its border with Iraq, where an autonomous Kurdish region hosts Kurdish militants in the form of the Kurdistan Workers' Party (PKK).

Similarly, by dislodging SDF from the area, Ankara also wants to rehabilitate some of the 3.6 million Syrian refugees who have taken refuge in Turkey.

In 1958, a bloody coup led to the government of King Faisal II being overthrown in Iraq by Brigadier Qasim with communist leanings, sending shock waves among the Arab kingdoms and their allies.3 To prevent the situation from tilting further into the favour of the Communists and the USSR, by 1959 the U.S. was funding Kurdish guerrillas in Iraq, who were fighting for autonomy.4 In 1964, Israeli Prime Minister David Ben-Gurion recognized that the Kurds could be used as a strategic ally against the radical Arab regime in Baghdad. Thus Israel also started supporting Kurd separatists in Iraq through Iran. Israeli strategy was simple, as long as the Kurds presented a clear danger to Baghdad, the Iraqi military could not be deployed in force against Israel in the event of a war. This strategy paid off in 1967, amid heightened Kurd insurgency Iraq was unable to deploy its forces in the Pan-Arab War against Israel. As a reaction to the defeat of the Arab countries during the 1967 War and the U.S. supporting the Israeli cause, Iraq severed its diplomatic relations with the U.S. and Baghdad drifted completely into the USSR camp. In 1973, Massoud Barzani, Kurd leader of Iraqi National Congress (INC), travelled to America. While in Washington Massoud met Richard Helms, the CIA director, and Al Haig, the White House Chief of Staff, a meeting that led to both CIA and Israeli advisors moving into northern Iraq to help the Kurds.5 This gave flip to insurgency in Iraq once again. As a consequence, during 1973 Arab-Israel War Iraq could only muster a single armored division because 80 percent of its military was tied down in northern Iraq.6 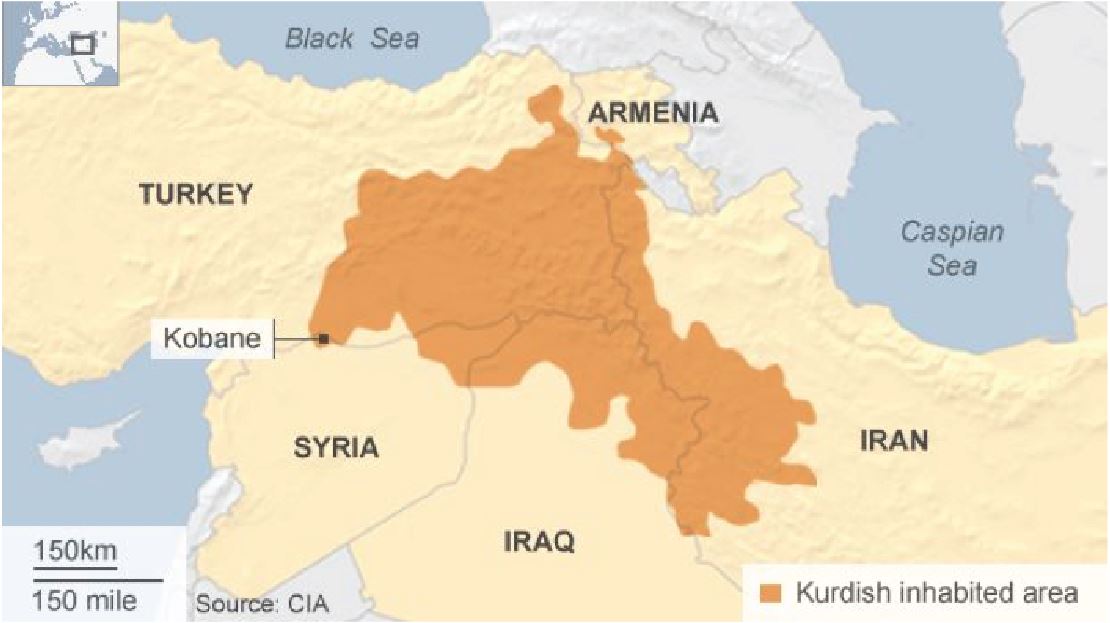 As part of SDF operations to expel the Islamic State from its main Syrian stronghold in Raqqah in 2017, the U.S. government disregarding the sensitivities of Ankara continued to pursue a policy of arming the YPG directly. As a consequence, Turkey launched an offensive directly against the YPG in Afrin district from January 20 to March 24, 2018 under code name “Olive Branch”. Around 25,000 Free Syrian Army personnel joined Turkish forces to capture Arab towns and villages seized by the YPG, taking control of the Afrin region of northwest Syria.
Despite strong resistance by Turkey, the U.S. again in 2019, provided USD 300 million for military training and equipment to SDF, predominantly led by the PKK-affiliated People's Protection Units (YPG), and USD 250 million for building a "border security force" in Syria.14 With YPG getting stronger amid U.S. military withdrawal from the region, the Turkish military on October 9 launched military operation named “Operation Peace Spring” in SDF controlled northeast Syria. The aim of the operation is to create a 20 mile broad buffer zone from Afrin in the west to Iraq in the east. Turkey believes that by creating this zone it could prevent the Syrian border from becoming like its border with Iraq, where an autonomous Kurdish region hosts Kurdish militants in the form of the Kurdistan Workers' Party (PKK).
Similarly, by dislodging SDF from the area, Ankara also wants to rehabilitate some of the 3.6 million Syrian refugees who have taken refuge in Turkey.
It is believed that by the establishment of a buffer zone in northeast Syria, Ankara would not only be able to protect the influx of terrorists in the garb of refugees into Turkey as was done in case of FATA, Pakistan, but would also dash the hopes of U.S. and Israel to establish another autonomous Kurd state in Syria. In these circumstances both America and its western allies are reacting very adversely to the Turkish military operations in Syria. Apart from putting economic and military sanctions on Turkey, President Trump also tweeted that he would “devastate Turkey economically” if it hits at the Kurds.
Conclusion
In a changed geopolitical scenario, it becomes obvious that both Israel and the U.S. are working on the agenda of dividing and Balkanizing Muslim countries in the Middle East on one pretext or the other. Colonel Gaddafi as well as Saddam Hussein were removed from the seat of power by design to plunge Libya and Iraq into civil wars and chaos. A similar military coup attempt was made against President Recep Erdogan to remove him from the seat of power in Turkey. Apart from this, using Sunni-Shia divide as the main driver in the region, Muslim countries have been pitched against each other in proxy wars raging from Syria to Iraq including, Yemen, Iran and Saudi Arabia. Additionally, ethnic fault lines such as Turkish/Persian/Arab/Kurdish are also manipulated to create anarchy in the region. As a consequence of this well-crafted strategy Muslim countries are fighting each other as a group or as individual states with no clear agenda or end state in mind.
In these circumstances it is very important for all the significant Muslim countries of the region like Saudi Arabia, Turkey, Iran, Egypt, Syria and Pakistan to rise above petty differences. It is of paramount importance that Kurdish issue facing the region must be resolved peacefully and amicably on priority. All the stakeholders of the region i.e., Syria, Iraq, Iran and Turkey must formulate a platform or organization with the active representation and participation of Kurds. This platform must build consensus whereby Kurds must be given their due share in governance, political guarantees and economic freedom without disturbing the territorial integrity of any state. Since this agenda runs contrary to the U.S./Israel designs for the region, therefore, Russia and China may be engaged to act as mediators and facilitators for the process. Meanwhile, irrespective of political and sectarian affiliation, all the Muslim countries must raise their voice against imposing of sanctions against Turkey or any other Muslim state in the future by the U.S. At the same time, Muslim world through dialogue and engagement must help Yemen, Libya and Syria to come out of civil wars and embark on the road to prosperity and well-being for their citizens.

The writer is a retired Vice Admiral of Pakistan Navy. He is currently serving as Ambassador of Pakistan to Maldives.
E-mail: [email protected]

Disclaimer: This article contains personal views of the author and cannot be associated with the policy of Government of Pakistan or any other state institution.