This year’s monsoon spell has wreaked havoc across Pakistan, but some areas have been impacted more than the others. Balochistan, Sindh, Southern Punjab and Khyber Pakhtunkhwa (KP) are the most affected regions. These areas have suffered greatly due to heavy rainfall and floods that have inundated several villages, claimed more than 1000 lives, damaged over thousands of homes, and affected almost 33 million of the total population according to National Disaster Management Authority (NDMA). More than two and a half million acres of cultivated crops have been washed away with almost 0.7 million livestock dead. The damages to the infrastructure is in millions of dollars, while the full extent of the devastation is still unknown. 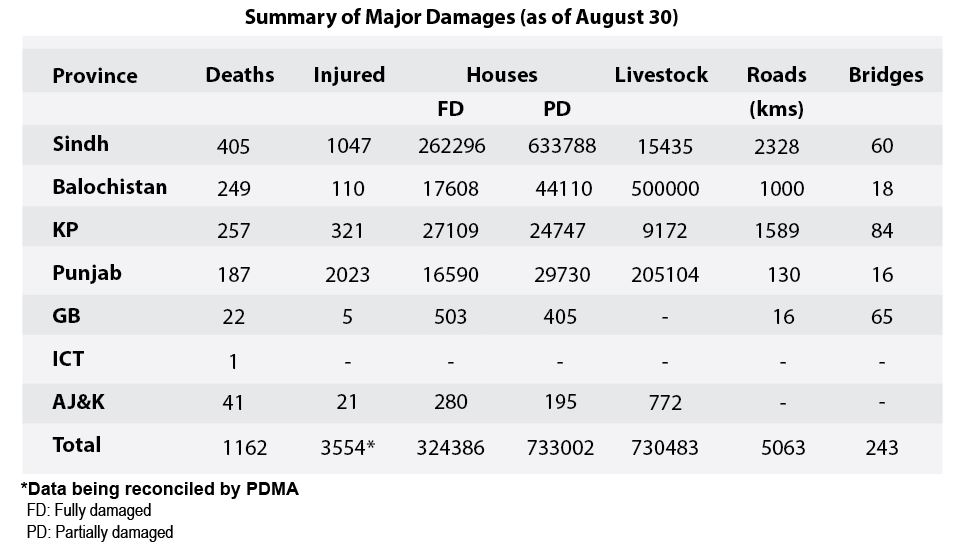 Continuing with the tradition of always being ready for the aid of the nation in times of crises, Pakistan Armed Forces are at the forefront once again in providing relief and rescue to the flood affected areas all over the country. Pakistan Army has established a Relief and Rescue Organization under Headquarters Army Air Defense Command to manage the relief and rescue operations.
So far, more than 50,000 people have been evacuated to safe places, while more than 25,000 people have been provided medical care. Pakistan Army has also set up temporary medical camps all over the flood affected areas to give primary healthcare to the affectees. Pakistan Army has also been actively providing ration, tents and cooked food to the flood affected people. A month’s salary of General Officers has been donated to the relief fund, as well as ration of more than three days was initially distributed on the special directives of Chief of the Army Staff (COAS), General Qamar Javed Bajwa. 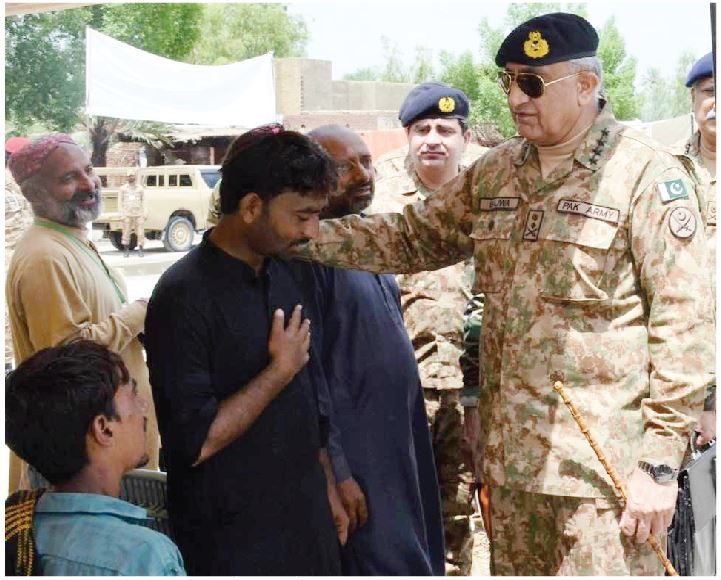 COAS’ Visit to the Flood Affected Areas
COAS visited the flood affected areas of Balochistan, Sindh and KP on August 27, 28 and 30, 2022, respectively. He went to the flood relief and medical camps established at Goth Sadoori, Lakhra, Lasbela (Balochistan); Khairpur, Kambar and Shahdad Kot (Sindh); and Swat (KP) and inquired about the wellbeing of local people affected by the floods. He also met troops busy in relief operations and lauded their efforts in the service of men, women and children in distress.On the directions of COAS, Pakistan Army and Frontier Corps are working together with national and provincial disaster management authorities to conduct rescue and relief activities in the affected areas.
“The safety and wellbeing of our countrymen comes first and we won’t rest until each one of the flood affected is not only reached, but rehabilitated no matter how much effort is required. The people of Pakistan are our priority and we won’t spare any effort to assist them in this difficult time”, said COAS. 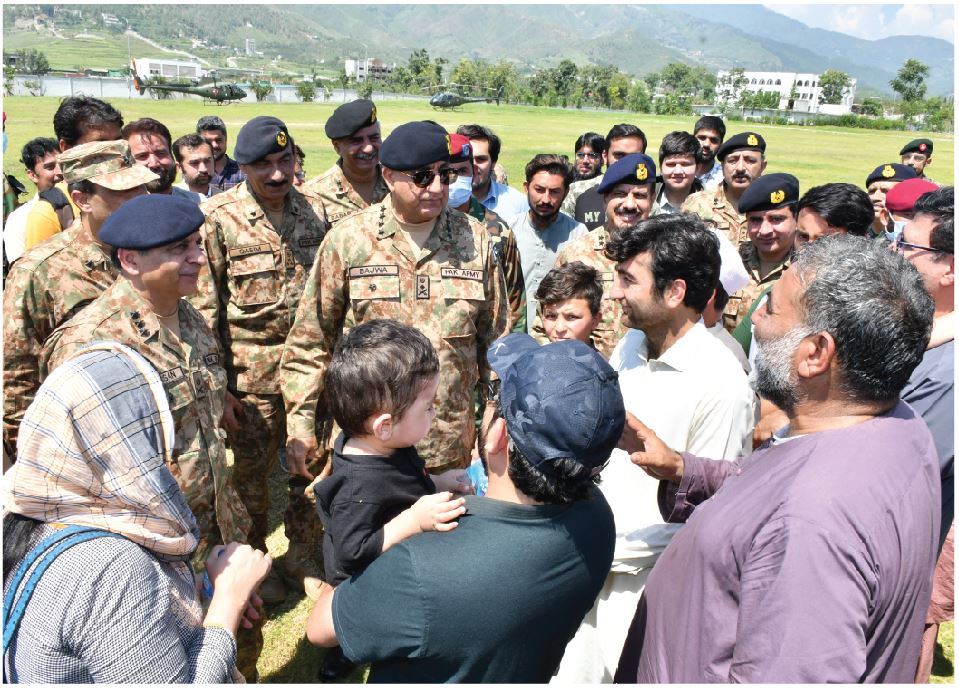 He also directed to utilize all available resources to assist the civil administration for rescue, relief and rehabilitation of people and infrastructure in the flood affected areas. “We must reach out to our brothers and sisters in need without any delay and help them overcome this natural calamity”, said COAS.
Visits by the Corps Commanders
Commander 11 Corps, Lieutenant General Hassan Azhar Hayat
Commander 11 Corps, Lieutenant General Hassan Azhar Hayat visited the flood affected areas of Swat. During the visit, the Corps Commander also interacted with the locals and assured them of Army’s continued provision of relief and rescue operations.
He met the tourists that were rescued by the Army from flood-hit areas of Kumrat and Kalam valley. He also met the troops and the locals engaged in the relief and rescue operations and lauded their efforts. 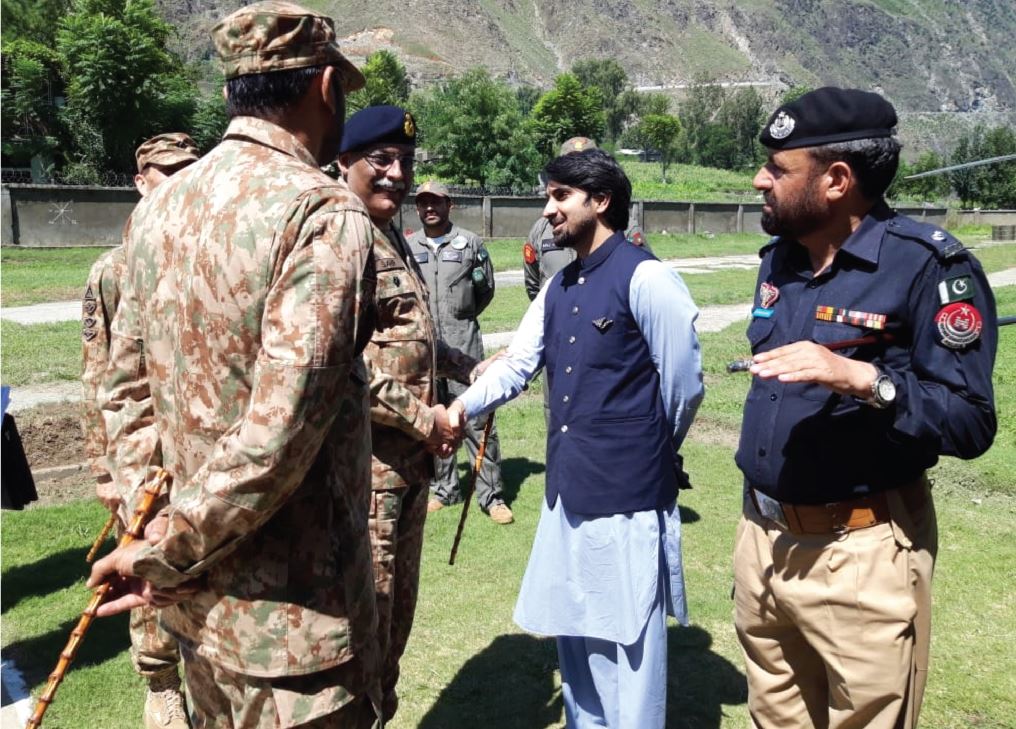 Commander 10 Corps, Lieutenant General Sahir Shamshad Mirza
Commander 10 Corps, Lieutenant General Sahir Shamshad Mirza visited the remote areas of Kohistan and supervised the relief and rescue operations in the flood affected areas. Pakistan Army has, as usual, participated in the rescue and relief operation with the spirit of patriotism and selflessness.
In this regard, Commander 10 Corps visited the far-flung flood affected areas and expressed his satisfaction over the rehabilitation and relief operations by Pakistan Army. He also appreciated the skill and courage of the pilots of Pakistan Army Aviation.
Recently, in Kohistan, an army pilot valiantly rescued a person trapped in the flood and brought him to a safe place without caring for his own life. “In this hour of distress, Pakistan Army will use all its resources to rehabilitate the general public and will be ready to help the people at any time”, the Corps Commander reiterated. 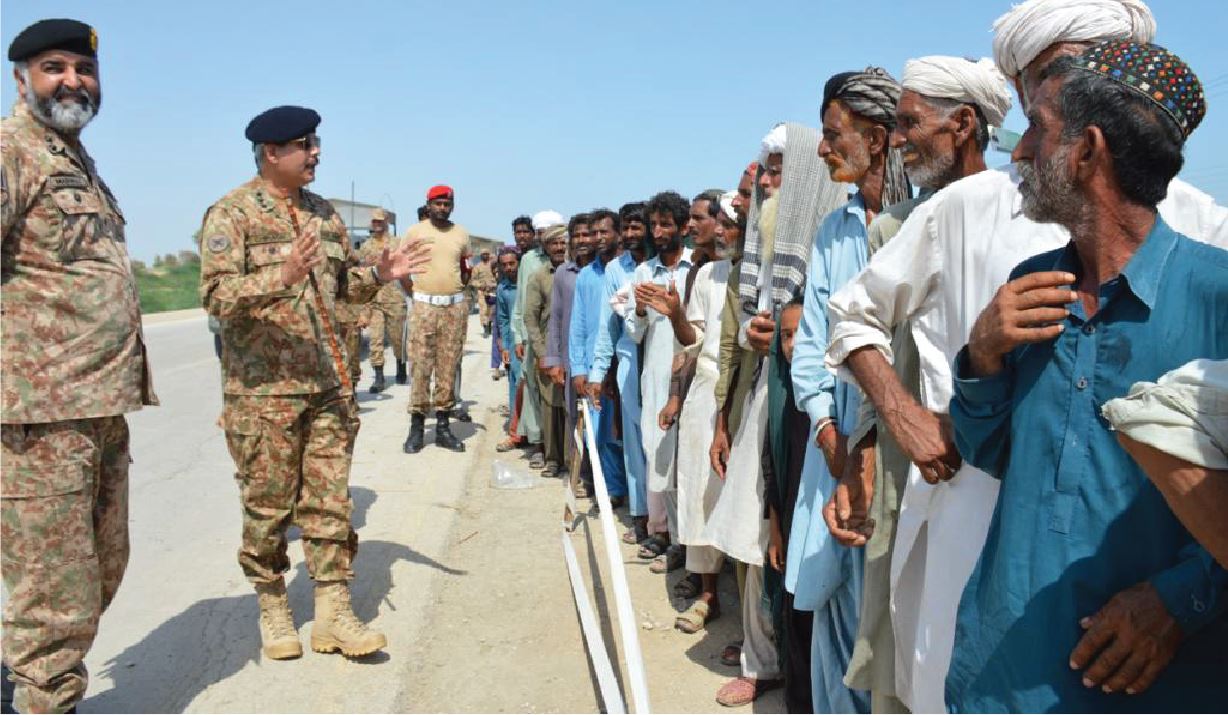 Commander 12 Corps, Lieutenant General Asif Ghafoor
Several areas of Balochistan received lashing showers, due to which the traffic between Balochistan and Punjab had been suspended for days at Fort Munro. Efforts were made to clear all the major highways with the help of heavy machinery.
COAS issued special directions to Commander 12 Corps for rescue, relief and rehabilitation efforts on an emergency basis in coordination with the civil administration in Balochistan. Unfortunately, on August 2, while on the relief and rescue operation, Lieutenant General Sarfraz Ali embraced martyrdom in a helicopter crash.
Lieutenant General Asif Ghafoor took charge as Commander 12 Corps after his martyrdom. Chief Minister Balochistan, Abdul Qudus Bizenjo and Commander 12 Corps were given a detailed update on the situation of the flood and ongoing relief and rescue activities in the province at PDMA. He appreciated the rescue and relief efforts by the civil administration. He emphasized that besides the preservation of dams, the roads/railway tracks’ resumption/maintenance should be given priority. He also directed the authorities to identify the areas where flood devastation is expected in the upcoming rain spell to minimize the loss of lives and properties.
Lieutenant General Asif Ghafoor along with concerned officials from the civil administration  visited Hazara Town and other rain affected areas to review the situation in Quetta. He told the residents that the people affected by the flood would not be left alone by Pakistan Army and the public administration would always find themselves at their aid in this hour of difficulty.
Relief camps have been established in Lasbela and other flood affected areas of Balochistan. People are being shifted to relief camps and safe places in view of rising water flow and affected dams. After shifting the victims to safe places, they are being provided with prepared food and ration.
Free medical camps were established by Pakistan Army and FC Balochistan in the affected areas providing free medical aid and medicines to the affectees. 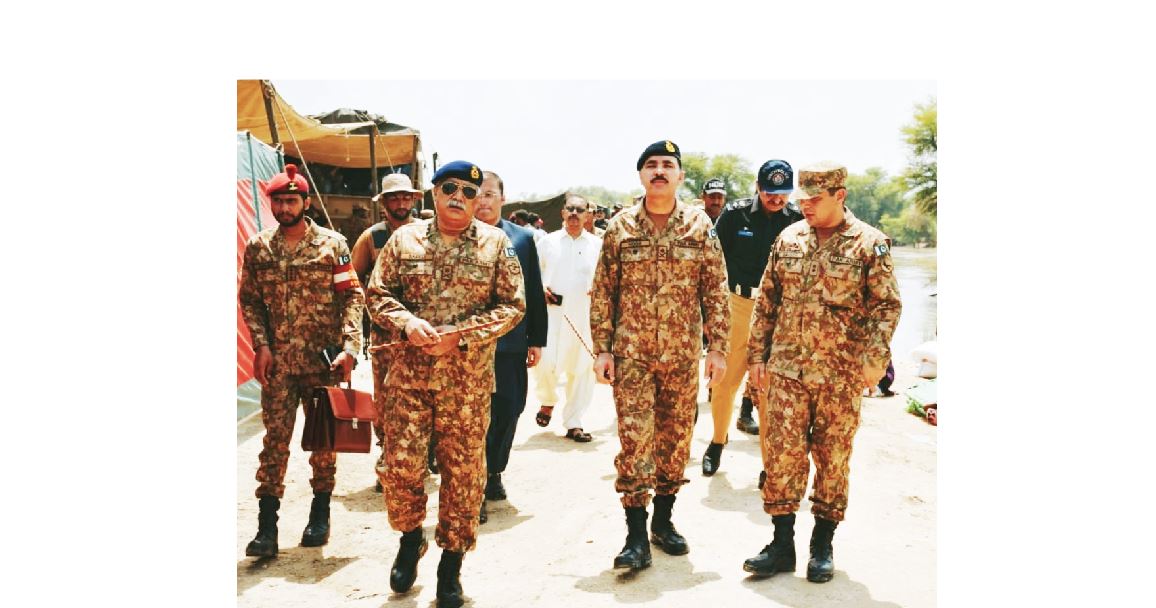 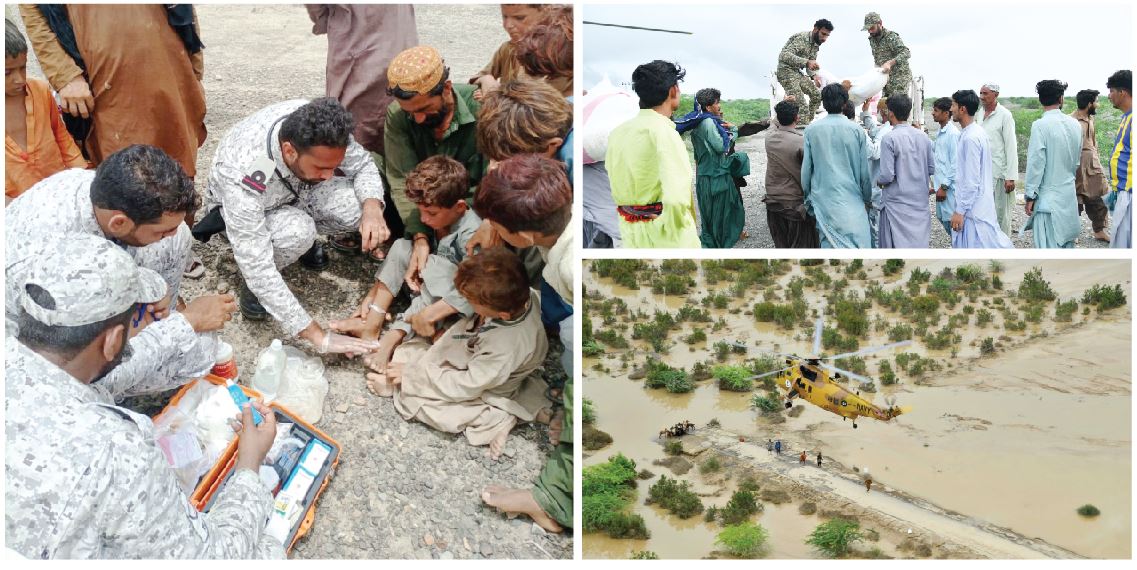 PN has set up a tent village at Bela near Uthal, Balochistan and is carrying out relief efforts in the far-flung rural areas of Sindh including Sujawal, Jati, Said Pur, Sahto Goth, Lothio Goth, Jamali Goth, Mallah Goth, Panhwar Goth, Urki, Uthal, Lakhra, Mureed Khoso, Pir Jhalu, Keti Bandar, Shah Bandar, Chuhar Jamali, Ghotki, Pir Dino Shah, Saindad Alyani and Mirpur Khas. Food and health facilities are being provided to the displaced persons at the tent village. Moreover, free medical camps have been established in different areas to provide first aid and free medical facilities to the locals. A dedicated team of doctors and paramedical staff is providing treatment and free medicines to the affected populace.
PN helicopters continued their operations in transporting ration bags, cooked food and relief goods in the far-flung rural areas of both provinces. De-flooding operations have been expedited in different areas by PN rescue teams.
PN, along with civil government and various philanthropist organizations, is providing continuous assistance to the flood-stricken people while transitioning to rehabilitation operation in the worst affected areas. The relief operation in Balochistan and Sindh is a practical manifestation of PN’s resolve to extend all out support to the fellow countrymen in this hour of need.

PAF’s Rescue and Relief Operations
elief and rescue operations by Pakistan Air Force (PAF) are in full swing in the flood affected areas of Balochistan, Sindh and South Punjab. Keeping the tradition of serving the nation during natural calamities, PAF came to the rescue of flood affected people. On the special instructions of Chief of the Air Staff, Air Chief Marshal Zaheer Ahmed Baber Sidhu, PAF is reaching out to the needy families whose houses have been damaged due to the natural calamity. Food and medical facilities are being provided round the clock to the affected families by the relief teams of PAF.

The recent floods have caused devastation in the low-lying areas of Balochistan, Sindh and South Punjab region, badly damaging the villages and infrastructure. Despite inclement weather conditions throughout the country, especially in the flood-stricken areas, PAF personnel are working hard to provide humanitarian assistance to the flood affectees. Emergency response teams are constantly busy in supplying basic food necessities and medical care. Hundreds of locals trapped during flood affected areas have been evacuated to safer places. PAF has provided humanitarian assistance and disaster relief support to the people stranded in the flash floods affected areas of Nurwah, Madadpur, Kot Magsi, Mauripur, Sohbatpur, Habib Kot, Fatehpur, Sadiq Pul, Fazilpur and Hajipur.
PAF has always remained at the forefront in extending humanitarian assistance during natural calamities. Relief operations in South Punjab, Balochistan and Sindh are a practical manifestation of PAF's resolve to extend all out support to fellow countrymen in the hour of need.