Quadrilateral Security Dialogue: Implications for the Indian Ocean Region and Beyond

Concept of Asia-Pacific
It is no longer the Atlantic Ocean but the confluence of the Pacific and Indian Ocean (the Asia-Pacific) that is at the core of global geopolitics now. The Quadrilateral Security Dialogue (QSD) aka “the QUAD”, was initiated in 2007 by Japanese Prime Minister Shinzo Abe and got discontinued after the withdrawal of Australia under the then Prime Minister, Kevin Rudd. On November 12, 2017, leaders from the United States, India, Japan and Australia met in Manila to revive the Quadrilateral Security Dialogue (QSD) and to urge cooperation for a free and open Indo-Pacific. The term Indo-Pacific, and the policy implications that come with it, is an important indicator of how the United States and its allies are working to shape the geopolitics, or at least how it's conceived. The Indo-Pacific idea simply expands the conceptual region of Asia-Pacific to include the Pacific, India and the Indian Ocean. Indo-Pacific refers to the maritime space stretching from the littorals of East Africa and West Asia, across the Indian Ocean and Western Pacific Ocean, to the littorals of East Asia. The QUAD translates this geopolitical understanding into a strategy, envisaging the two oceans as a single security space; which includes India and Japan, bridged by Australia, and undergirded by the U.S.’ maritime dominance.1 The 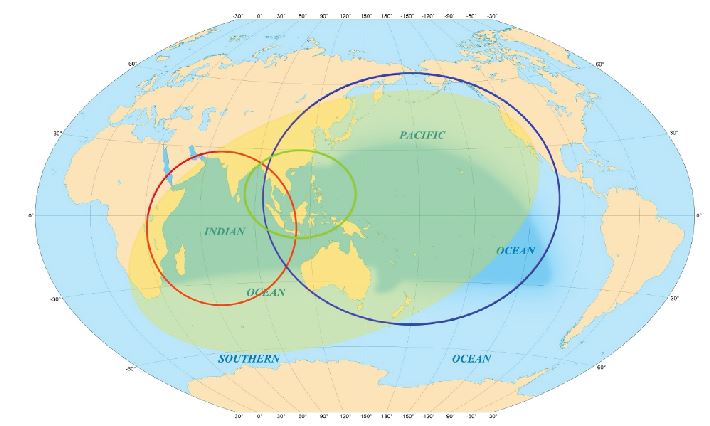 impetus for such a reconceptualization is simple: Japan, Australia and India, isolated as they are in their own oceans, want to create a balance against the Western Pacific's rising power, China, by uniting under a single geopolitical sphere. In October 2020, the U.S. Secretary of State, Mike Pompeo, and his three counterparts from Australia, India, and Japan, met in Japan. The focus of the meeting was to underline the fact that a four countries coalition would work together for protecting freedom of navigation and promoting democratic values in the Indo-Pacific region. There was no joint statement, but Pompeo stated that the purpose of the group was to “protect our people and partners from the Chinese Communist Party’s exploitation, corruption, and coercion.”2 Although the other three ministers framed the meeting differently in their opening statements, the fear of China’s  so-called growing influence and assertiveness in the region looms large during the discussions. Though all the QUAD members are wary of China’s peaceful rise but differ on how to respond. Policymakers in India are especially concerned about overtly provoking China.
Evolving Maritime Environment in the Indian Ocean in the Wake of the U.S.-China Rivalry
The Indian Ocean is the third-largest of the world's oceanic divisions, covering 70,560,000 km2 (27,240,000 sq mi) or 19.8% of the water on Earth's surface. The Indian Ocean stretches from the Strait of Malacca and Western coast of Australia in the East to the Mozambique Channel in the West. It encompasses the Persian Gulf and Arabian Sea in the North, all the way down to the Southern Indian Ocean. Along the coasts of this huge geographic expanse are countries that are home to some 2.7 billion people. The Indian Ocean’s key subregions are: South Asia, the Middle East, the Eastern coast of Africa, and islands dotting the ocean from Sri Lanka in the East to the Comoros Archipelago in the West.
As many observers see it, the Indian Ocean has been a center for geoeconomic power struggle since the 1970s and now it would be a new center for geostrategic and geopolitical competition among the world powers. It has the most important Sea Lines of Communication (SLOCs) for oil trade among major Asian economic powers. The SLOCs in the Indian Ocean cover quite a few important choke points of global petroleum liquids consumption. In 2018, the daily oil flow averaged 21 million barrels per day (b/d) or the equivalent of about 21% of the internationally traded oil transported through the Strait of Hormuz, nearly one-third of the 61% of the total global petroleum and other liquids production that moved on maritime routes in 2015 transited through the Strait of Malacca and total petroleum flows through the Bab el-Mandeb Strait accounted for about 9% of the total seaborne-traded petroleum (crude oil and refined petroleum products) in 2017.3 Roughly eighty percent of Chinese trade flows through Malacca Strait. Finally, there is the Mozambique Channel between Madagascar and Mozambique, which is a key trading route for goods transiting from the Cape of Good Hope to the Middle East and Asia. 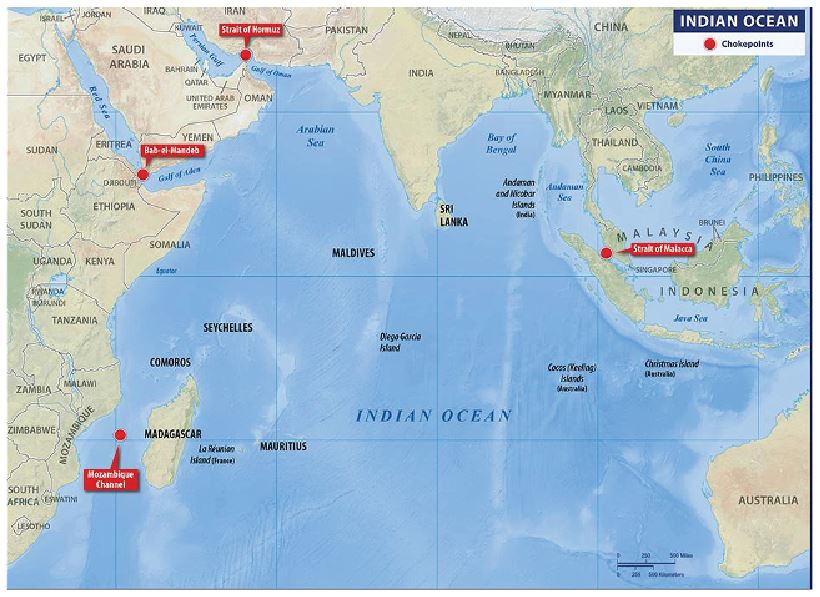 The United States' chief foreign policy priority is to prevent the rise of a power that could challenge American primacy in Eurasia. Since China’s increasing power is likely to challenge the American supremacy not only on land but at sea in the future. Therefore, the U.S. is trying to not only contain China but also wants to roll back its growing influence in Asia and beyond.

The writer is a retired Vice Admiral and was the Ambassador of Pakistan to Maldives.
E-mail: [email protected]