President of the Islamic Republic of Pakistan Visits Air Headquarters

The inaugural ceremony of a two-day flagship international seminar titled ‘Global Strategic Threat and Response’ (GSTAR) arranged by Centre for Aerospace and Security Studies (CASS) was held at Air Headquarters, Islamabad on October 19, 2022. Dr. Arif Alvi, President of the Islamic Republic of Pakistan, was the chief guest at the occasion. On his arrival at Air Headquarters, he was received by Chief of the Air Staff (CAS), Air Chief Marshal Zaheer Ahmed Baber Sidhu, Pakistan Air Force (PAF). 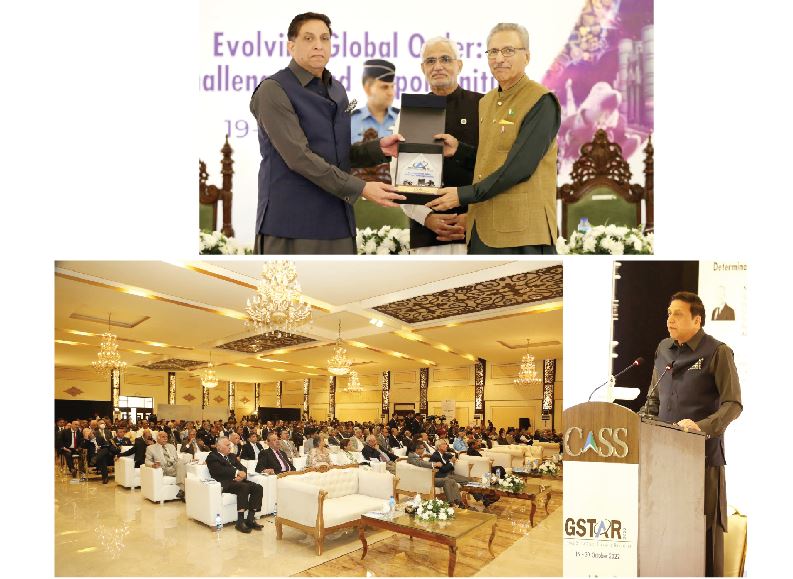 President Dr. Arif Alvi, in his inaugural address appreciated the PAF’s key initiatives directed towards maximising the field of knowledge into its operations. He appreciated the CASS administration for the conduct of a thought-provoking seminar on the contemporary strategic issues. The President said, "The complex dynamics of the world politics have exponentially changed the traditional balance of power and security environment which demands a befitting response through national cohesion. The present era marked the creation of new centres of power created by technology and wealth, therefore, there is a need to construct a new order on the basis of equality of humans, respect for human security, harnessing of new technology and a commitment to peace.”
Earlier, CAS, in his welcome address said that the growing rivalry between major powers had resulted in the weakening of international institutions and emergence of traditional and non-traditional security issues. In the context of new technologies, he highlighted the dangerous consequences of selective sharing and its effects on the regional stability. CAS emphasised on the need for international consensus to address the challenges of these technologies. He reiterated the resolve of PAF to contribute towards securing the national interests of the country. In this regard, he informed about significant initiatives being planned in various domains including operations, capability enhancement, organisation and training to make PAF a cutting-edge force.
The Air Chief also announced the formal launch of the National Aerospace Science and Technology Park (NASTP), aimed at giving impetus to the process of indigenisation and technology drive in the country. The first park of its kind would be inaugurated this year while two others would follow in the near future.
Later, President Dr. Arif Alvi met CAS in his office. The President was briefed on the operational readiness and PAF's unflinching resolve to ward off any external threat to national security. CAS highlighted PAF's comprehensive plan for the growth of indigenous capabilities in the well-established as well as emerging disruptive technologies in aerospace, cyber, IT and artificial intelligence domains.
While acknowledging the critical role of PAF in the defense of the motherland, the President underlined the importance of Air Force in contemporary geopolitical milieu. He lauded PAF's efforts and contributions beyond the call of duty by assisting the government of Pakistan in responding to natural calamities. He expressed the highest level of confidence in the visionary PAF leadership and stated that PAF’s human resource, technical, operational and industrial domains were well poised to achieve excellence which had always been a hallmark of PAF.