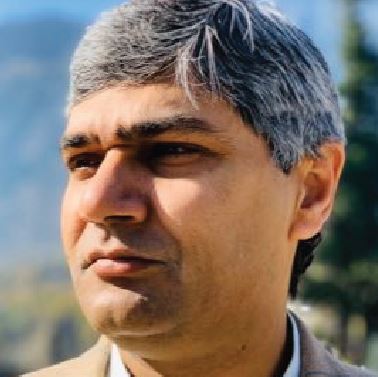 This is essentially an age of narratives. Narratives not only shape people’s attitudes and behaviour but they also form the contours of politics, identity and ideology. Each society has its own grand narratives and strengthens them through creating and upholding subsidiary premises. The states and societies make efforts to craft new narratives according to their political and ideological needs. Paigham-e-Pakistan is a similar effort, which Pakistan had been lacking since the beginning of its war against terrorism. It is deemed as comprehensive narrative that has endeavored to challenge the appeal of militant or extremist narratives in politico-ideological, legal or jurisprudential and sociocultural perspectives. 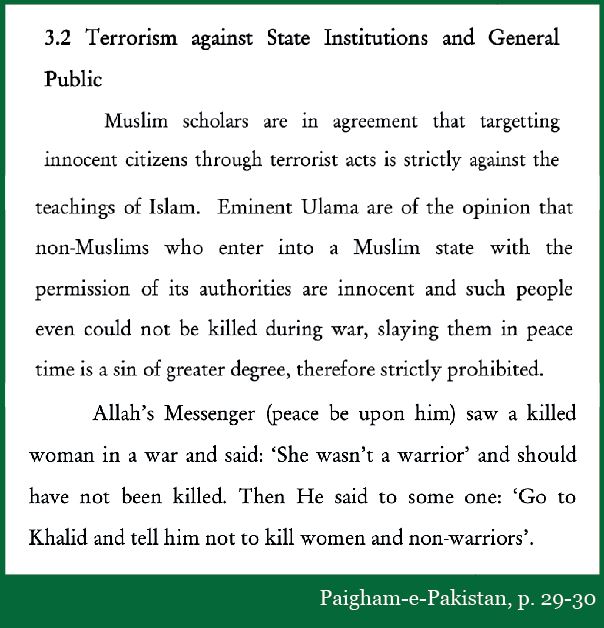 Paigham-e-Pakistan was launched at the President House on January 15, 2018, in the presence of religious and political leaders of the country. The document has two components: first part entails the preamble, which provides the contextual analysis of the ideological and political situation; the second part is the religious decree, which initially was signed by 1829 religious scholars representing all religious schools of thought in the country. So far, over 4000 religious scholars have signed the document and the number is anticipated to cross 50,000 in the coming months.
As far as the contents of Paigham-e-Pakistan (PeP) are concerned, it seems very comprehensive and well argued. For example, it talks about the reconstruction of Pakistan’s society and says: “Pakistanis neither demean other religions nor humiliate the founders of other religions. It is imperative for Muslims to bring others towards Islam only through convincing argumentation while practising their own religion independently and freely.” The PeP also endorses the constitutional clauses on religious freedom and declares them as being in accordance with the basic principles of Islam. It says: “All citizens have the guarantee to fundamental rights within the parameters of law and ethics. These rights include equality in status and opportunities, equality before the law, socioeconomic and political justice, the rights of expression, belief, worship and freedom of assembly.” Similarly, the declaration condemns sectarian hatred, armed sectarian conflict and the imposition of one’s ideology on others by force. The religious scholars, who have signed the declaration, pledged they would work for a society based on the principles of democracy, liberty, equality, tolerance, harmony, mutual respect and justice to achieve a congenial atmosphere for peaceful coexistence. Describing the context of the declaration, Paigham-e-Pakistan claims that maximum legislation, according to Islamic teachings and principles, has taken place in this country. 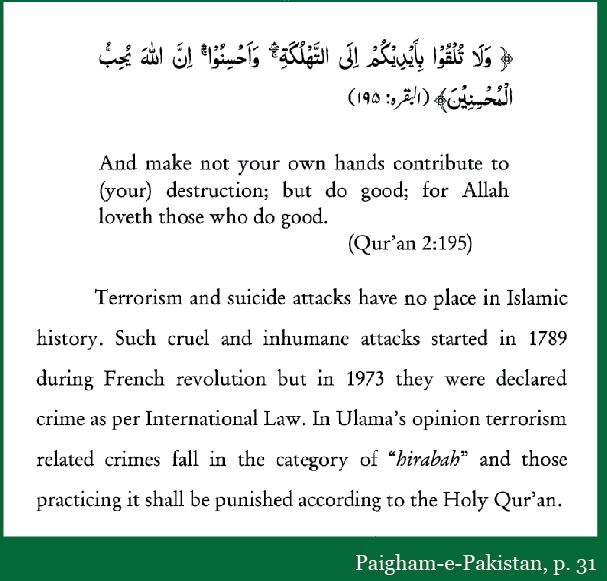 Indeed the contents of Paigham-e-Pakistan are very essential and important for creating social harmony in the country. However, after three and a half years of PeP’s pronouncement, there is a need for fair assessment of the outcome and impact of the document. Theoretically, the number of religious scholars who are signatories to the document must be a strong indicator that the PeP will nurture a new moderate or counter-extremism narrative. Practically, however, the religious scholars and clergy are still reluctant to adopt the document as a manual of peace and harmony for their mosques and madressahs. As mentioned earlier, controversies created by a few religious groups have also compromised Paigham-e-Pakistan, reflecting the religious clergy’s narrow vision. The late President Mamnoon Hussain had expressed confidence that the unanimous fatwa would help address the challenges posed by terrorism, extremism, and sectarianism. But has this anticipated goal of the PeP been achieved? Maybe we need more time and effort to make PeP a successful soft measure of countering extremism and promoting harmony.
Still, at the intellectual effort, PeP is one of the important achievements of Pakistan’s religious scholars, which has created a conducive environment for discussing sensitive issues and critical ideologies related to religious thought. PeP has created space for some other policy initiatives, like the Code of Conduct (CoC) for sectarian harmony.
The Council of Islamic Ideology (CII) – a constitutional body that advises the legislature on compatibility of laws to Islamic principles – has developed the CoC for ending sectarian and communal hatred and hate speech in the country by engaging religious scholars. The 20-point CoC is basically built on Paigham-e-Pakistan. Besides talking about protecting the rights of women and non-Muslim citizens, and legal issues – including those related to blasphemy – the CII’s CoC declared all kinds of violence in the name of religion a revolt against the State and denounced hate speech and excommunication of other sects; including through the use of mosques, imam bargahs, and mass gatherings. Similarly, the CoC prohibits the use of religious institutions or platforms like mosques and imam bargahs for hate speech. 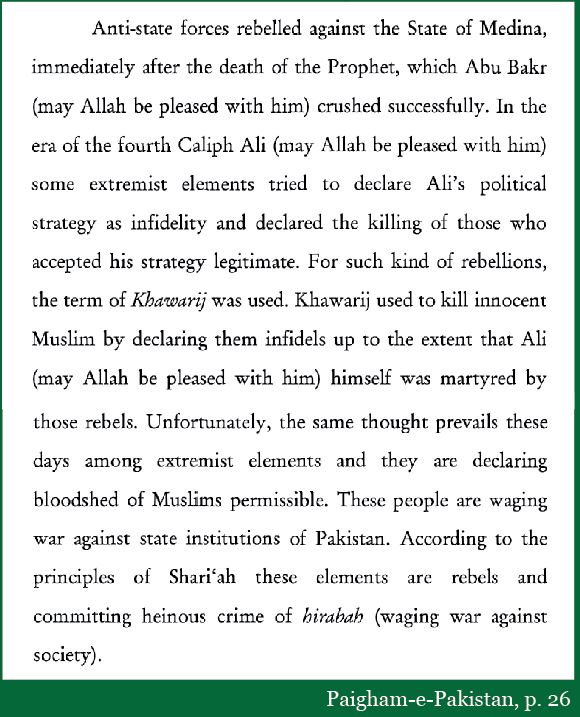 The PeP and CoC are not the first initiatives taken by the state or religious scholars to reduce sectarian tensions. Apart from several other state-sponsored religious decrees and declarations, a somewhat similar document was also developed by the Milli Yakjehti Council (MYC), an alliance of religious parties formed to address sectarianism in the mid-1990s. The CII’s CoC echoes similar clauses espoused in the MYC draft, but can be termed different in terms of authority and source. As cited earlier, this is based on Paigham-e-Pakistan, a comprehensive state-sponsored declaration against extremism endorsed by thousands of religious scholars of all schools of thought.
Some analysts, however, argue that such fatwas and declarations have wielded little to no influence on the most radical elements and extremist groups in Pakistan. For one, even in the presence of such drafts and decrees (including the PeP and CoC, for instance), extremist elements and groups would continue to spread hatred as per their convictions or other internal and external compulsions. Certainly, the issue is deep-rooted and linked to the society’s religious, identity-related and socio-political ethos and cannot be resolved simply by a firefighting approach. Others assert that these kind of soft measures take time to challenge the appeal of extremist ideologies, which have taken decades to take roots in societies like Pakistan.
Yet, the fact remains, as cited earlier, that despite the presence of all these laws and declarations there has been little change on the ground. That is despite the fact that the spread of hate speech and extremist ideologies in Pakistan has clear-cut ramifications, including the potential for resorting to violence. In many instances, hate speech has even instigated mob violence, especially against citizens from religious minority groups accused of blasphemy. While it has not been unheard of for entire villages and communities to come under attack in Punjab in some cases, incidents of faith-based violence, mainly against Ahmadis and those accused of blasphemy, have recently increased in Khyber Pakhtunkhwa. Even in the absence of violence, hate speech can widen differences and mistrust, sowing discord among communities and undermining social harmony. 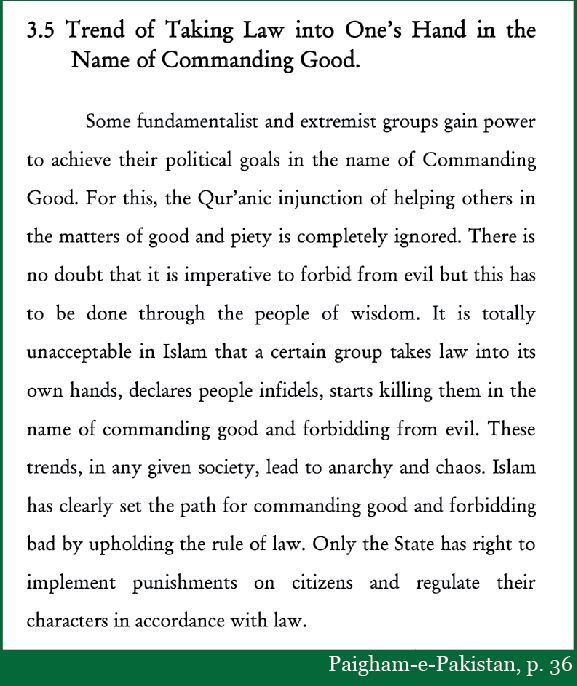 Paigham-e-Pakistan can be more effective when its ownership will be shared with all segments of the society. No doubt that the document has also been accorded endorsement by the Imam-e-Kaaba – a divine figure revered highly by many Pakistanis – now civil society needs to get engaged in the promotion of PeP. Especially the segments that operate on a non-religious basis, i.e., media, professional bodies, and even political parties, do not intervene in such issues proactively due to a few obvious reasons. For one, a sense of religious sensitivity and sanctity, in which the clergy does not allow anyone but the authority to take up religious matters, keeps diverse societal segments out and renders the entire discourse their exclusive domain.
Therefore, selected contents and messages from the PeP, especially those criminalising militancy and violence against citizens and delegitimising the practice of declaring someone kafir (disbeliever or out of the creed of Islam) should be included in the syllabus of both schools and madressahs. Likewise, short and targeted messaging designed around the PeP contents can be disseminated for the general knowledge and education of the wider public.
Paigham-e-Pakistan should be disseminated on a mass scale through the education system and media. 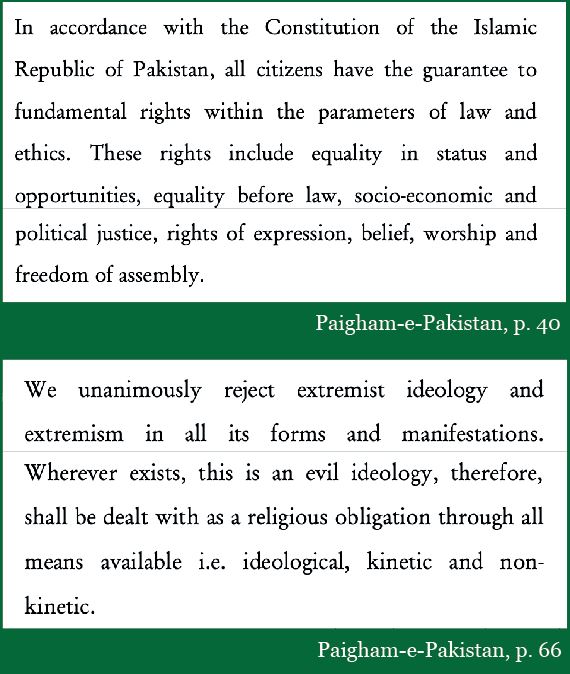 National cohesion cannot be created without developing sectarian harmony, and both require managing and celebrating diversity. Fear of diversity is rooted in mistrust of the social contract, in which coercive uniformity is seen as the only option. But uniformity cannot be an alternative to diversity. Usually, state and societies have multiple social contracts to conduct day-to-day business with each other, but two are considered especially important. One, between the state and society i.e., the Constitution; and second, among the diverse segments of society to manage their religious, racial, ethnic and cultural differences, which is part of our collective memories. In Pakistan, the constitutional crisis has deep roots and reflects weaknesses in honouring and abiding by the constitutional principles, whereas the sectarian divide has badly affected the social contract within society.
Social cohesion is not possible without empowering and uplifting the religious minorities and marginalized communities of the country. Dr. Shoaib Suddle has prepared a report on the subject under the command of the Supreme Court of Pakistan and recommended certain initiatives including curriculum reforms. The Supreme Court of Pakistan had formed the one-member commission in 2014 to implement the judgement of Justice Tassaduq Jillani-led bench for the protection of minorities’ rights. According to the judgement, the federal government was required to set up a task force for developing a strategy on religious tolerance, revisiting the curriculum for the promotion of a culture of tolerance, establishing a special quota for minorities in the federal and provincial services, acting against hate speech, and establishing a special force for the protection of places of worship of minorities.
The PeP, CoC and Dr. Suddle’s report are commendable efforts made by the state institutions, but there is a need that all these initiatives should be synchronized with the policy discourses and the state should take the lead in introducing the reforms in the light of these documents.

The writer is a security and political analyst and the Director of Pak Institute for Peace Studies (PIPS). He has worked extensively on issues related to counter-terrorism, counter-extremism, internal and regional security, and politics. Twitter @AmirRana