India, geographically and politically, was never a single entity or a country. It is the British who, after the Mughals, were able to bring the subcontinent under a central control. Exposure to European education and modernity laid the foundations of nationalism and modern nation-state in the subcontinent. Resultantly, Hindu and Muslim nationalists started their freedom struggle for a sovereign republic, collectively under the banner of Indian Congress. At this juncture Quaid-i-Azam Muhammad Ali Jinnah rightly identifying that Muslims and Hindus were two different nations, demanded a separate homeland for the Muslims of subcontinent on the basis of religious identity. Resultantly British divided the subcontinent into two countries; India and Pakistan in 1947. At Independence, Jammu and Kashmir comprised of an 80 percent Muslim majority region and still had not chosen whether to join India or Pakistan. As per the principle of partition being the contiguous Muslim majority area the state of Kashmir should have formed the part of Pakistan. However, India occupied it illegally in 1947-48 through military aggression and went to United Nations against Pakistan. The United Nations Security Council Resolution 47 was adopted on April 21, 1948 to assist in the peaceful resolution of the Kashmir Conflict by setting up a five-member Commission. The five-member commission made up of Argentina, Belgium, Columbia, Czechoslovakia and the United States drew up a resolution calling for the withdrawal of troops by both the countries, and a referendum to decide Kashmir's future through plebiscite. The United Nations brokered a ceasefire in 1949, and the United Nations by declaring Jammu and Kashmir a disputed territory determined the Line of Control (LoC), by which Azad Kashmir and Gilgit-Baltistan were given under Pakistani control, while Indian Illegally Occupied Jammu and Kashmir (IIOJ&K) remained under New Delhi’s occupation. 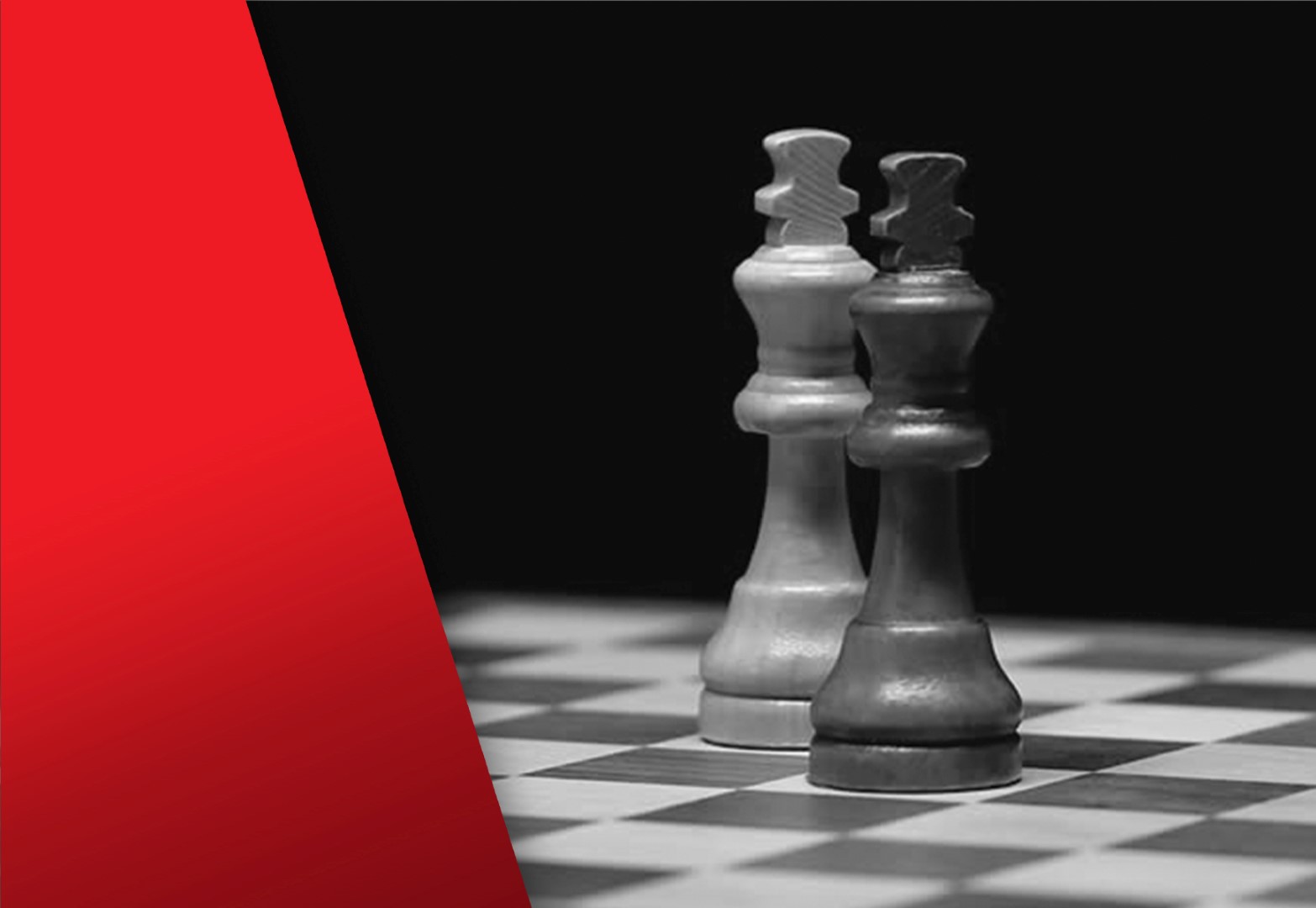 From the current standoff with China, New Delhi wants to achieve a number of strategic objectives; Firstly, it wants to dissuade China from supporting Pakistan on Kashmir issue. Secondly, it wants to receive unconditional economic, military and diplomatic support from the West by raising the bogey of Chinese threat as it did in 1962. Thirdly, it wants to annex IIOJ&K and change the demography of the area. Fourth, India wants to become a main player of the new great power competition with the U.S.-led alliance on one side, and China and Russia on the other side. 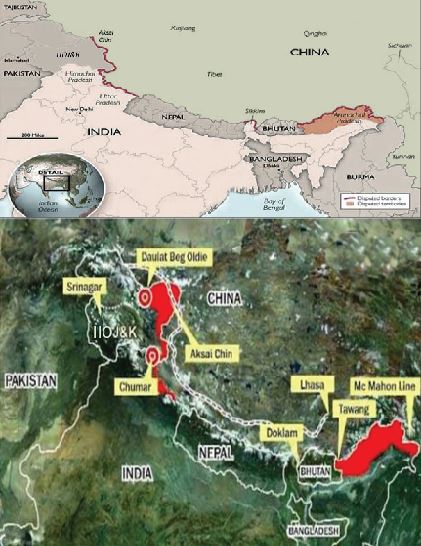 India-China Border Dispute
The entire Sino-Indian border (including the western Line of Actual Control/LAC, the small undisputed section in the centre, and the McMahon Line in the east) is 4,056 km (2,520 mi) long. It traverses five Indian states: Uttarakhand, Himachal Pradesh, Sikkim, Arunachal Pradesh and Ladakh (created in 2019, disputed area since it is part of IIOJ&K).5 On the Chinese side, the line traverses through the Xinjiang and Tibet Autonomous Regions. China possesses extensive territory in the northwest of India's Illegally Occupied Kashmir in three areas: the Shaksgam Valley, Aksai Chin and Demchok. Nepal and Bhutan are two independent countries and considered buffer states situated between the northeastern and northwestern sections of the India-China border. The mountainous state (with special rights) of Sikkim was the third buffer, located between Nepal and Bhutan. By inciting anti monarchy riots through political maneuvering and military coercion, India forced the last monarch to accept Sikkim as India’s 23rd state of Indian Union in 1975. Today India has absorbed this state fully into the Indian Union and using it as a springboard to sponsor terrorist activities in Chinese Tibet. Arunachal Pradesh is located in the far northeast, a state of India which was created by New Delhi on January 20, 1972. The majority of the territory is claimed by China as part of South Tibet. The Indian states of Himachal Pradesh and Uttarakhand are located between Nepal and Kashmir along the border with China. Indian defence analysts consider these states vulnerable to Chinese military incursions. In recent years, this perceived threat has led New Delhi to enhance its military defences and communication networks in the area.
Daulat Beg Oldie (DBO) which lies in Ladakh is located near the eastern most point of the Karakoram Range in the far north of India, just 8 km south of the Chinese border and 9 km northwest of the Aksai Chin, Line of Actual Control (LAC) between China and India. Other than Siachen Glacier military bases, it is India's northernmost military base. Apart from having Brigade size force, the Indian Army maintains helipads and a gravel air strip there, the highest airstrip in the world. Routine sorties are carried out using An-32 aircraft to provide relief and supplies to the troops stationed nearby. The Indian government first announced the plans in 2001 to construct a motor able road from Leh to DBO. Despite Chinese serious objections the road was completed in 2019. The 255 km is an all-weather road in eastern Ladakh close to the Line of Actual Control with China. It connects Ladakh's capital city Leh, via the villages of Darbuk and Shyok at southern Shyok Valley, with the DBO military base near the China border. Darbuk-Shyok-DBO (DS-DBO) Road runs at elevations between 4,000-5,000 metres (13,000-16,000 ft). Since Ladakh is a disputed territory, therefore, construction of a road and enhancing of military footprint by India in Ladakh is considered a violation of the agreed principle of maintaining status quo in disputed areas by China.
The Karakoram Pass lies to the North West of DBO at a distance of approximately 17 to 18 kilometers. This area is contiguous to Gilgit-Baltistan and Azad Kashmir of Pakistan. Adjacent to the portion of the Gilgit-Baltistan is the famous Shaksgam Valley which was handed over by Pakistan to China in 1963 through a mutual border agreement between the two. The Karakoram Highway (KKH) is a 1,300 km (810 mi) national highway which connects the Pakistani provinces of Punjab and Khyber Pakhtunkhwa plus Gilgit-Baltistan with China's Xinjiang Province. The KKH therefore is considered the backbone for CPEC. In addition, the China National Highway (G219) passing through Aksai Chin which connects Xinjiang Province with Tibet also has strategic significance for China. When viewed from military/economic perspectives, the area between Karakoram Range and Kunlun Range, including the area of Aksai Chin, is of vital importance to both China and Pakistan. Therefore, strong Indian presence at DBO could radiate serious threat to Gilgit-Baltistan, KKH, Chinese National Highway G219 and in turn to CPEC.
Galwan Standoff 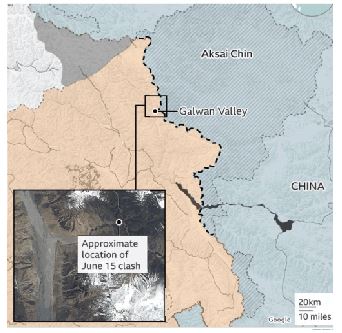 The writer is a retired Vice Admiral of the Pakistan Navy and was the Ambassador of Pakistan to Maldives.
E-mail: [email protected]