The graduation ceremony of 142 GD (pilots), 88 Engineering Course, 98 Air Defence, and 23 Administration and Special Duties, and 8 Navigation Courses was held at PAF Academy, Asghar Khan on October 10, 2019. A total of 113 Aviation Cadets including 5 Royal Saudi Air Force Cadets graduated at this occasion.

Both the Chairman Joint Chiefs of Staff Committee (CJCSC) General Zubair Mahmood Hayat and Chief of the Air Staff (CAS), Pakistan Air Force Air Chief Marshal Mujahid Anwar Khan were present at the ceremony, with the CJCSC attending as the chief guest. The CJCSC awarded branch insignias to the graduating officers and gave away trophies to the distinction holders. He also awarded the Quaid-i-Azam Banner to No. 2 Squadron, the new Champion Squadron of the Academy. 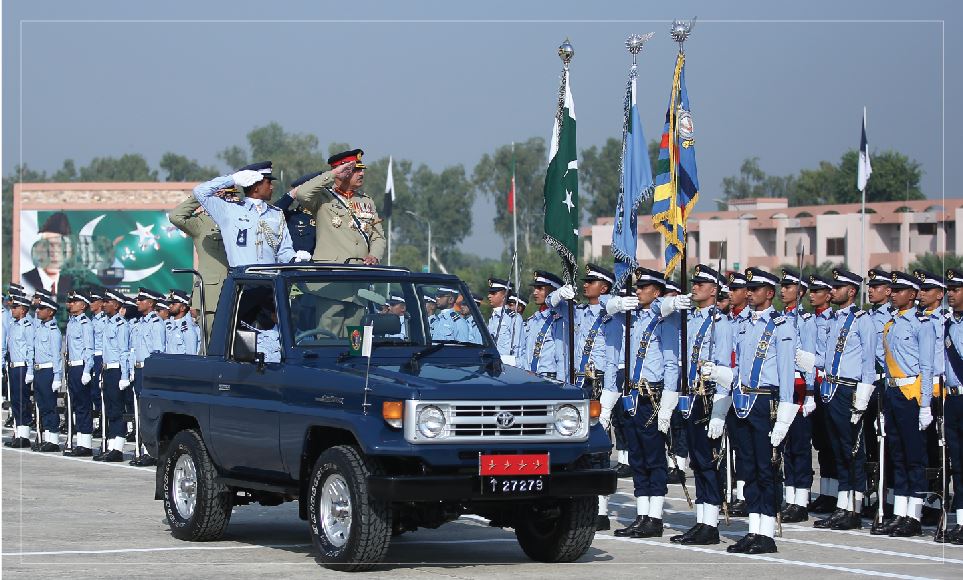 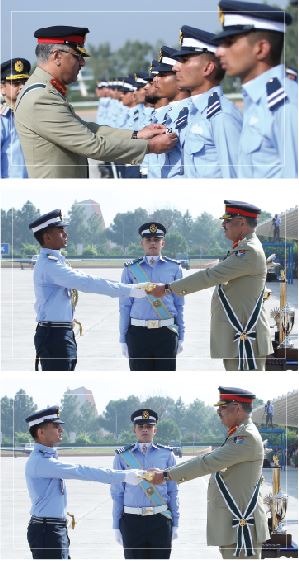 The ceremony was followed by a thrilling performance by “The Bravehearts” formation of four T-37 aircraft. The PAF Academy Aerobatics team Sherdils also performed an exhilarating aerial display at the occasion.
Addressing the graduation parade the chief guest stated, “Pakistan is a peace loving country and always follows the policy of friendly relations and goodwill especially with its neighbours. We are the nation that has rendered greatest sacrifices, both in terms of human and material for lasting peace. We stand firmly committed to this cause and would not allow anyone or any country to misinterpret our intent and actions.” He further said, “Pakistan firmly rejects attempted forceful annexation of Indian-occupied Jammu and Kashmir. This is illegal, illegitimate and not acceptable to the Kashmiris or Pakistan. We strongly condemn brutal and intensifying human rights violations of Kashmiris by the Indian security forces. The unprecedented 67-day curfew is a blot on human conscience,” further adding, “Pakistan will continue its unstinted moral, political and diplomatic support to our Kashmiri brethren. This is because Kashmir runs in our blood: Kashmir is Pakistan and Pakistan is Kashmir.” Lauding the PAF’s role during the recent Indo-Pak conflict, he said, “During the Operation Swift Retort, PAF once again proved its superiority, when it took the enemy by surprise and launched a precision strike against designated targets, besides shooting down two Indian fighter jets and capturing a pilot.”
The ceremony was witnessed by high-ranking military and civil officials, diplomats, foreign dignitaries and a large number of guests of Aviation Cadets.