False Flag Operation at Pulwama and Ideology of Hindutva into Play

From the leaked messages by Arnab Goswami it is now absolutely clear that Prime Minister Modi in collusion with Indian Army, Indian intelligence agencies and Indian right-wing media created a casus belli by orchestrating Pulwama incident to attack Pakistan. While Republic TV media team was stationed beforehand at the scene of Pulwama attack. For political gains, Modi very callously killed his own soldiers in Pulwama to win India's general elections scheduled for April-May 2019. 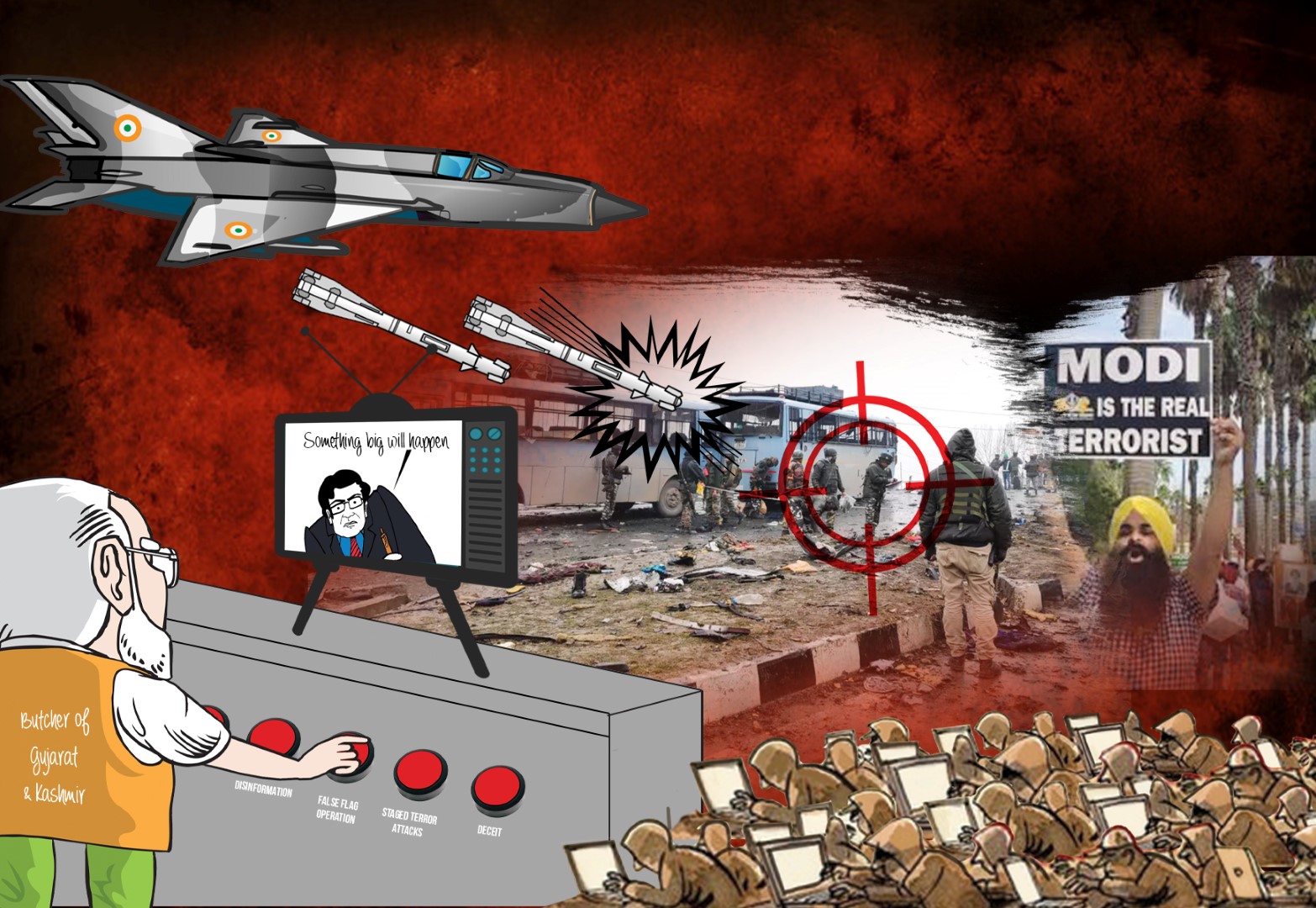 Rashtriya Swayamsevak Sangh and Ideology of Hindutva
In 1925, an Indian doctor named K. B. Hedgewar formed the Rashtriya Swayamsevak Sangh (RSS) to promote a more centralized and assertive interpretation of Hinduism.1 Hedgewar envisioned India as a distinctly Hindu nation in which the populace was united around a common and defensible interpretation of Hinduism or Hindutva. As an ideology it is based on the principle of establishing the hegemony of Hindus and the Hindu way of life in the Subcontinent. One thread of this ideology is to restore the division of Indian subcontinent by making it one entity. RSS believes that the 1947 partition of India and creation of Pakistan and later Bangladesh are in fact a sacrifice of holy land of Akhand Bharat and this historic mistake needs to be corrected. One RSS member, Nathuram Godse, was so incensed by Gandhi agreeing to the partition of India and his thoughts of a religiously tolerant society, that he assassinated Mahatma Gandhi on January 30, 1948.
The Bharatiya Janata Party’s (BJP) origins lie in the Bharatiya Jana Sangh, popularly known as the Jana Sangh, founded by Syama Prasad Mukherjee in 1951 in response to the politics of the dominant secular Indian Congress Party. It was founded in collaboration with the Hindu nationalist organization RSS and is in fact the political arm of the organization. Presently, RSS is part of the Sangh Parivar, a conglomerate of Hindu nationalist organizations spanning religion, politics and defense of the faith. RSS firmly believes that Subcontinent is a native Hindu region that has been invaded and contaminated by foreign religions. According to their views, Indian Muslims which constitute at least 14.2 percent of the country’s population cannot be accepted as sons of the soil. RSS also now publicly demands that Hinduism should supplant secularism as the guiding principle of Indian society.2 The ultimate aim of this philosophy is political and cultural subjugation of the country's Sikh, Christian and Muslim populations first, as well as the undoing and absorption of Pakistan/Bangladesh into the Indian Union later.
Prime Minister Modi embodies the past, present and future of the Hindu nationalist movement that is RSS. Modi was born on June 17, 1950; he joined the RSS youth wing when he was only 8 years old and became a full-time volunteer at the age of 17. In 1985, he joined BJP. In 2002, he became the Chief Minister of Gujarat and subsequently in 2014, he became Prime Minister of India. His exponential rise to power is based on strong anti-Muslim and anti-Pakistani ideology. To attract majority Hindu vote, he has openly professed demolition of Babri Mosque, ban on cow slaughter, revoking the special status of Indian Illegally Occupied Jammu and Kashmir (IIOJ&K) and teaching a lesson militarily to Pakistan and even fragmenting it further on numerous occasions.
In order to increase its vote bank among Hindus, Modi-led BJP party has always whipped up anti-Muslim sentiments. For example, in 1992, it organized a Hindu mob to demolish 16th century Babri Mosque. The contention was that the mosque was built upon the birthplace of the Hindu God Rama. Ensuing Hindu-Muslim communal riots spread to cities like Mumbai, Surat, Ahmedabad, Kanpur, Delhi, Bhopal and several others, eventually resulting in over 2000 deaths, mainly Muslim.3
In 2002, about 58 Hindu pilgrims died in a burning train near the Godhra railway station in the Indian state of Gujarat. In making a public statement after the incident, Modi declared it a terrorist attack planned and orchestrated by local Muslims. Resultantly, communal riots broke out in Gujarat. In one of the bloodiest massacres in the history of modern India, mobs armed with addresses of businesses and residences owned by Gujarat’s Muslim minority attacked and systematically eliminated Muslims. Human Rights Watch reported that nearly 2,000 Muslims were massacred by Hindu mobs and over 150,000 displaced.4 Modi as Chief Minister ordered Gujarat’s police not to halt the bloodshed or aid the victims. The worst-affected area was Ahmedabad, the state’s largest city. Violence continued unabated for three days from February 27 to March 1 and more sporadically throughout Gujarat for months. The U.S. State Department later concluded that Modi was complicit in the riots, that he ordered Gujarat’s police not to stop the violence or aid the victims, and that his police forces were directly involved in the bloodshed.5 Modi was never charged, however, but was instead reelected to a third term with a landslide vote. His use of state terrorism to inspire his core voting bloc continues unabated till date.
On May 17, 2004, Lalu Prasad Yadav was appointed railway minister. In September 2004, two and half years after the train burning, Yadav appointed former Supreme Court Justice Umesh Chandra Banerjee to investigate the incident. In January 2005, Banerjee presented his interim report, which tentatively ascribed the fire as an "accidental fire," after ruling out other theories.6 He cited a forensic report stating that the injuries on the victims were only compatible with an "internal fire." This was despite Modi being declared as the ‘Butcher of Gujarat’ by international media, as the Muslim genocide was conducted under his watch. Based on the facts mentioned above, he was also refused entry visa by the U.S. for sponsoring and abetting state-sponsored terrorism as Chief Minister. He became the hero of the Indian extreme right and was elected as Prime Minister of India in 2014. 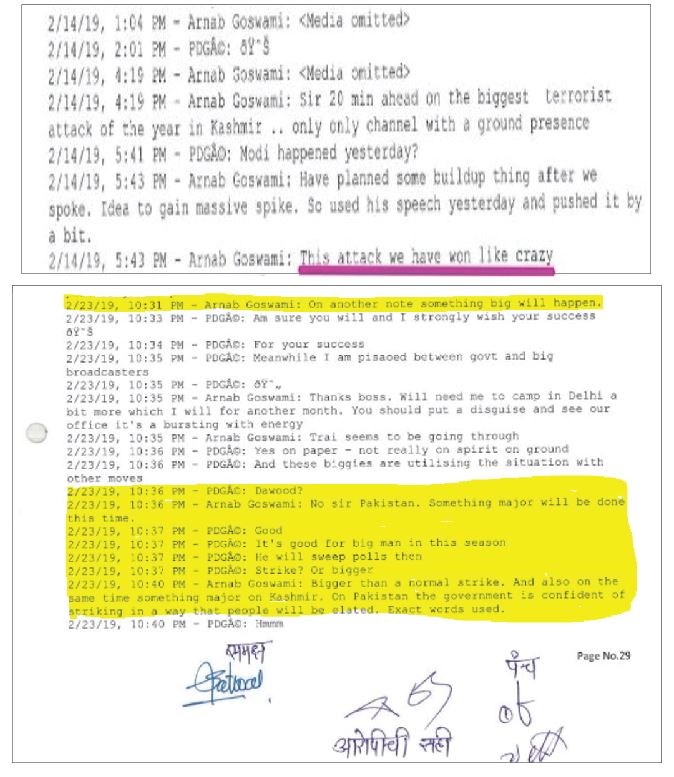 The author is a Retired Vice Admiral and was Ambassador of Pakistan to Maldives.
E-mail: [email protected]