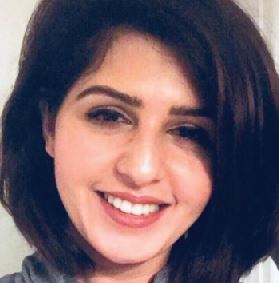 ”Water is the true wealth in a dry land; without it, land is worthless or nearly so. And if you control water, you control the land that depends upon it.” (Stegner in Gleick, 1993 a; 9)

World over, the very purpose of a state anchors around two fundamental principles: welfare and security of its people. The very concept of national security cuts across the entire spectrum of security calculus, ranging from food security, human security, physical security and integrity. The basic elements of national power (EoNP) determine the level, scale and direction of the national security of any state. In this context, Pakistan inherently emerging on the global map under a unique environment is a classic example of a security state struggling to measure up to the dictates of security paradigm, courtesy of the ever-growing machinations of hostile India, a perpetually instable Afghanistan and  being in the eye of storm of the strategic competing interests of the global powers. Our fragile economy, political instability and inability to harness our resources make it even more uncertain. Hydro politics, a new paradigm in security parlance is fast getting currency, with water security becoming the fundamental element of and a threat to Pakistan’s national security can trigger given the Indian water terrorism in the region. 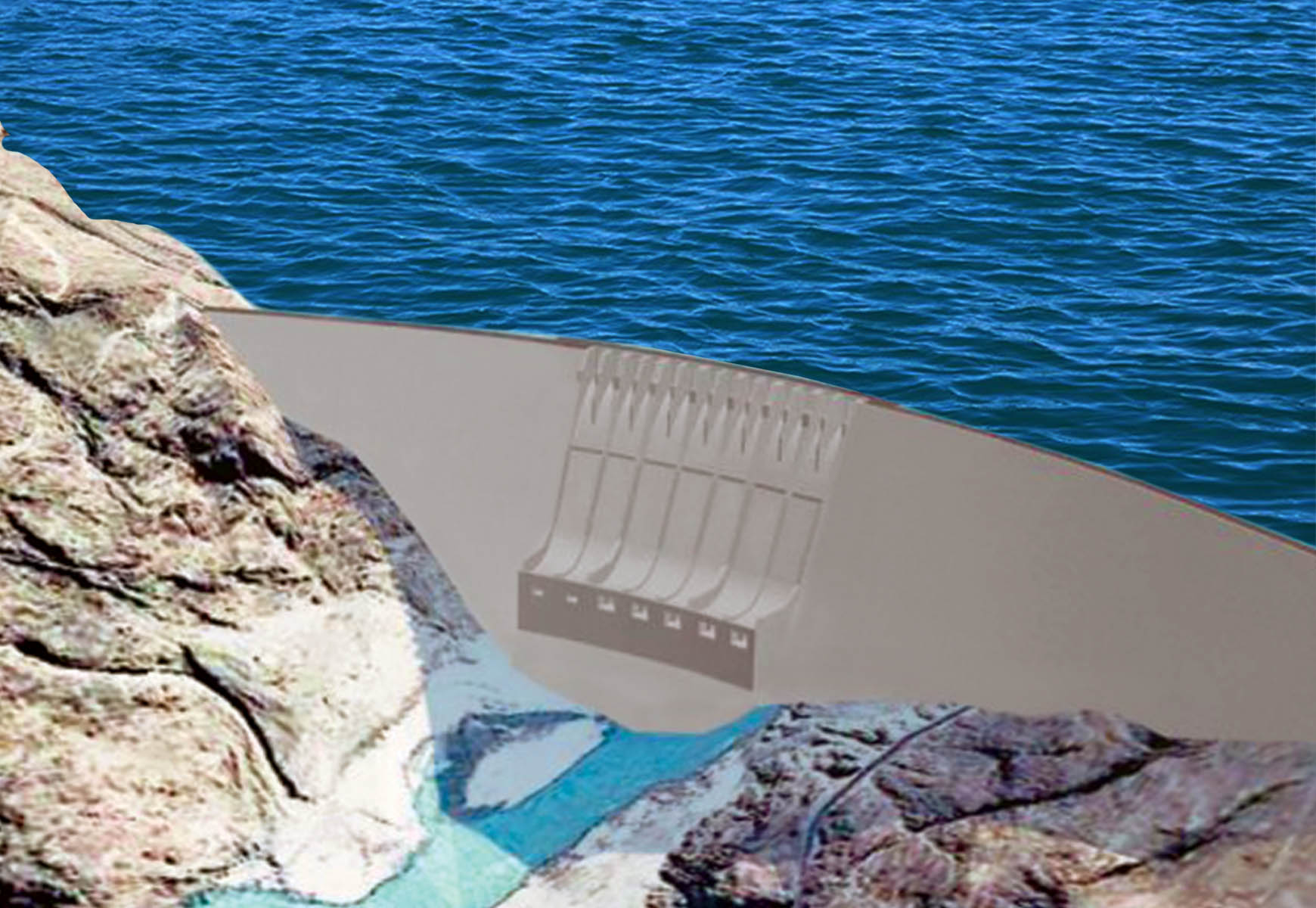 Pakistan exemplifies a classical mix of both acts of commission and omission in managing its water resources where a country from once a status of water abundant has turned into a water scarce country. Pakistan has faltered in all dimensions of water security, i.e., water management, water conservation, and water storage.
Pakistan’s water woes are due to all-encompassing factors like population explosion, growing energy needs, no addition in storage, continuous wastage of huge quantity of fresh water and, above all, continuously facing the 5th Generation Warfare.
Water! Tour D’Horizon
Partition lines drawn between India and Pakistan were neither politically justified nor ideologically correct leaving major chunk of territories with Indian control along with barrages leaving entire central and southern Punjab waterless. This led to the Indus Waters Treaty denying water of three Eastern Rivers to Pakistan. Two mega dams, Mangla and Tarbela, came as an incentive supported by the World Bank, which are the only storage ever since and perhaps have kept Pakistan afloat economically and ensured food security despite serious shortfalls in governance elsewhere.
While countries like U.S. and China have dams numbering more than 80,000 and India more than 5000, Pakistan is embroiled in discussions about the efficacy of any other mega storage preserving this diminishing commodity. The World Bank recommended Kalabagh as the most feasible project in view of its superior technical profile but it fell prey to our perpetual petty politics, witnessing a decades long slumber on the water resource management. Pakistan has climbed to the embarrassing slot of being amongst a few states which are water scarce and are faced with serious consequences by 2025, which is just around the corner. Some facts that can only be more disturbing are:
▪ Pakistan is one of the most water-stressed countries.
▪ It faces a high-risk water environment.
▪ Annual inflows of around 145 MAF are not likely to expand.
▪ Continuous extraction of ground water is deteriorating aquifers.
▪ Flooding and drought are here to stay.
▪ Pakistan has one of the lowest yield/productions.
▪ Sewerage water treatment is minimum at the level of only 2%.
▪ Project management in Pakistan is marred with issues like inefficiencies, time and cost overrun, land acquisition, litigation and resettlement issues.
▪ Climate change is seriously affecting both the pattern and availability of water.
▪ We have one of the lowest technological interfaces with agriculture.
▪ Political expediency takes precedence over good governance.
Despite all odds, Pakistan seems still inching forward with regards to balancing its energy mix in favour of renewables by commissioning long-awaited Neelum-Jhelum Hydropower Plant (969 MW), Tarbela Fourth Extension (1410 MW), Golen Gol Hydropower Project (108 MW), adding 2487 MW in the last two years. This alone protects Pakistan’s expensive import bills of oil to the tunes of million dollars per annum. Gradually moving ahead, it can take our industry out of the unbearable overhead expenditure which makes it less competitive in the international markets. The commissioning of these projects also provides a much-needed capacity upgradation in engineering and project management skills. Another feather in the cap of WAPDA is completion of the first phase of Kachhi Canal flowing through the barren lands of Dera Bugti and Sui. The completion of the remaining phases of this canal can turn this arid chunk of land into an agriculture hub, thus making a difference to the deprived lives of the Balochi population. This all-encompassing development creating revenue for further development, socio-economic uplift of the masses, capacity upgradation of the national institutions, and the confidence are all good signs for the future course of development.
A Glimmer in the Gloom: Diamer-Bhasha Dam
Despite the critical needs of at least two mega dams in the last three decades, Pakistan could only manage studies on Diamer-Bhasha in 80s only to realise that project management is squarely dependent on effective governance. The project of this magnitude would require resources beyond Pakistan’s capacity, engineering skills only to be procured from outside Pakistan and unlimited scale of resettlement issues. Before going further on the genesis and impact of DBD (Diamer-Bhasha Dam) due credit must go to team WAPDA which has crafted such financial model which will put minimum financial strain on the Government of Pakistan. With controversies like international financial institutions declining any financial support, Indian objection to the territorial dispute, some misplaced issues on design and seismic impact, all these factors took the project to the levels of almost becoming another Kalabagh. One could sense the urgency in Delhi on the commencement of Diamer-Bhasha Dam when the Indian social and mainstream media triggered a fresh wave of propaganda against the dam.
Dam’s Features
Location
On Indus River near Chilas (Khyber Pakhtunkhwa & Gilgit-Baltistan), 315 km u/s from Tarbela Dam, and about 40 km downstream of Chilas Town.
Design
There has been a discussion on the veracity of the process of design, though somewhat out of place. With limited technical understanding, what I gathered from the work of experts is that extensive deliberations were undertaken. The confusion is mostly due to different experts interpreting the same data across competing theories. This is natural in engineering and is reconciled by decision-makers choices. Most times they get it right, sometimes not. The alternative is to do nothing, which is worse!
According to experts, RCC will be time efficient and cost overruns are likely to remain in check. Concrete faced rockfill dam (CFRD), in view of non-availability of material in the region, will take a lot more time and the cost can neither be accurately predicted nor controlled. The design has been reviewed thrice by international experts including the likes of Barry Cook, regarded by many as the ‘Father of RCC’, and they have all endorsed the RCC option as the most suitable. They find that it is compliant with the comprehensive conventions of ICOLD (International Commission on Large Dams). So, it is hard to believe that a unilateral decision can be taken by any individual or WAPDA. 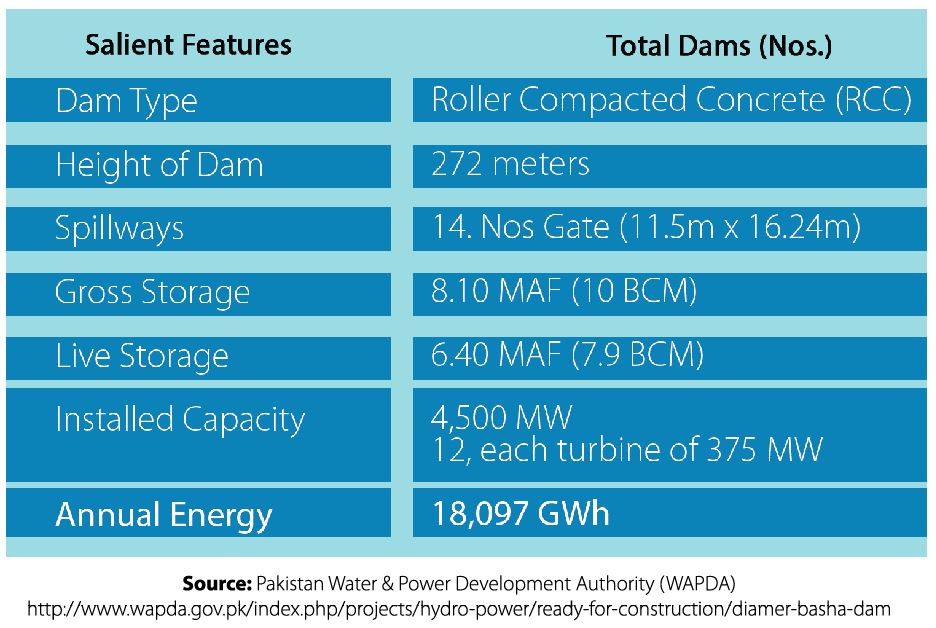 All hydropower projects along the Indus cascade are designed as RCC, including the under construction Dasu, and the projected Bunji, Thakot and Pattan projects. These have been designed by different consultants from Germany and Japan.
Glacial Lake Outburst Flood (GLOF) is also a reality. It is seen as a critical factor for design consideration and has been endorsed by consultants in designing process.
Likewise, WAPDA has procured efficient Joint Venture (JV) consultants comprising world reputed international engineers along with the Pakistani engineers. JV partners (consultants) who will supervise the construction of the project include Montgomery Watson Harza U.S., Pöyry of Switzerland and Dolsar from Turkey. Whereas, on the civil works construction, the JV comprises Power China from China and FWO of Pakistan.
Strategic Outcomes
Commencement of DBD is a game changer for Pakistan in water security. It has had strategic impact on the totally misunderstood concept of some geographical legitimacy of area. This is indeed part of Pakistan and has re-endorsed Pakistan’s strategic position. This when viewed in the backdrop of Indian irrational and illegal annexation of Kashmir and Ladakh have had greater consequences. Recent China-India skirmishes in Ladakh is a case in point.
Cutting the current water shortages by 50%, DBD will help usher in a new era of agricultural development. Pakistan’s current paultry storage of only 10% and carryover capacity of only 30 days will undergo major boost with the realisation of DBD. Besides the immense boost to hydropower, i.e., 4500 MW will be a real transition to economic development for this cheap energy is the only way to making our industry competitive. It’s imperative for Pakistan to design an energy mix in favor of renewables and there can be no better substitute to hydropower generating clean, green and cheap energy.
Socio-economic development in the dam area spreading over to the tunes of Rs. 78 billion is appreciable and will be a landmark change for the masses since it entails education, health, water resource management and community development.
Technically, the project will also impact not only by enabling an increase in the life span of Tarbela Dam to another 35 years by mitigating the silt but also by increasing power production capacity of all downstream projects including Tarbela, Chashma and even planned Pattan and Thakot.
Where Do We Go from Here?
Diamer-Bhasha Dam addresses all three fundamental components like water storage which is so essential for our economic development, irrigation/agriculture needs; food mitigation as well as climate improvement by ensuring water even down by Kotri which has been a focus for some time. Commencement of Diamer-Bhasha is a flicker of hope wherein the government/WAPDA have been able to overcome decades-long slumber and one can hope the momentum can be followed to address the issue of water security.
Going down to brass tacks, our policymakers have to chalk out conservation and management policies and see if our canals are lined, drip irrigation practices are implemented, brackish water is used, species of seeds suitable for brackish be explored, water intensive crops be aided and above all that one single factor of governance gets that long-awaited flip.
It’s time for us to carve out a set of water philosophy grounded in our policy and culture alike, to realise the importance of water for our lives as part of the national security. The big question remains, when shall we ensure the implementation of the much-needed interface of policy, technology and entrepreneurship? Notwithstanding the unflinching resolve of WAPDA to push it through with zeal and spirit , the project will continue to remain in the eye of the storm for its obvious strategic significance to Pakistan for ensuring its national security through food and energy security.
Multiple competing interests are expected to roll out strategies not only to impede the process of development but also form national disharmony and fault lines through nefarious propaganda. Some of those are already viral with Indian reaction and China’s all out support to the project. Assuming our stakeholders will ensure security of the project under their ever-watchful focus so essential to its timely commissioning. It is likely that ongoing projects like Mohmand Dam and Dasu Project shall make a difference in the socio-economic development of Pakistan. After Diamer-Bhasha Dam, another mega storage project is definitely the need of the day.

The writer is a broadcast journalist by profession. She has a MPhil in Public Policy and Governance, and currently a PhD fellow in Defense and Security Studies.
E-mail: [email protected]