Despite meagre resources and huge security challenges, Pakistan Army through professional astuteness has maintained a high state of operational readiness. In addition, it continues to maintain a rich tradition of making monumental sacrifices and contributions towards nation-building and assisting the government(s) in almost all aspects of national security paradigm. Pakistan Army has also made voluminous contributions towards security, peace and stability in the region and around the world. A stock of last five years of the institutional contributions is indeed a testimony of the visionary approach, astute professionalism and selfless devotion to the nation. 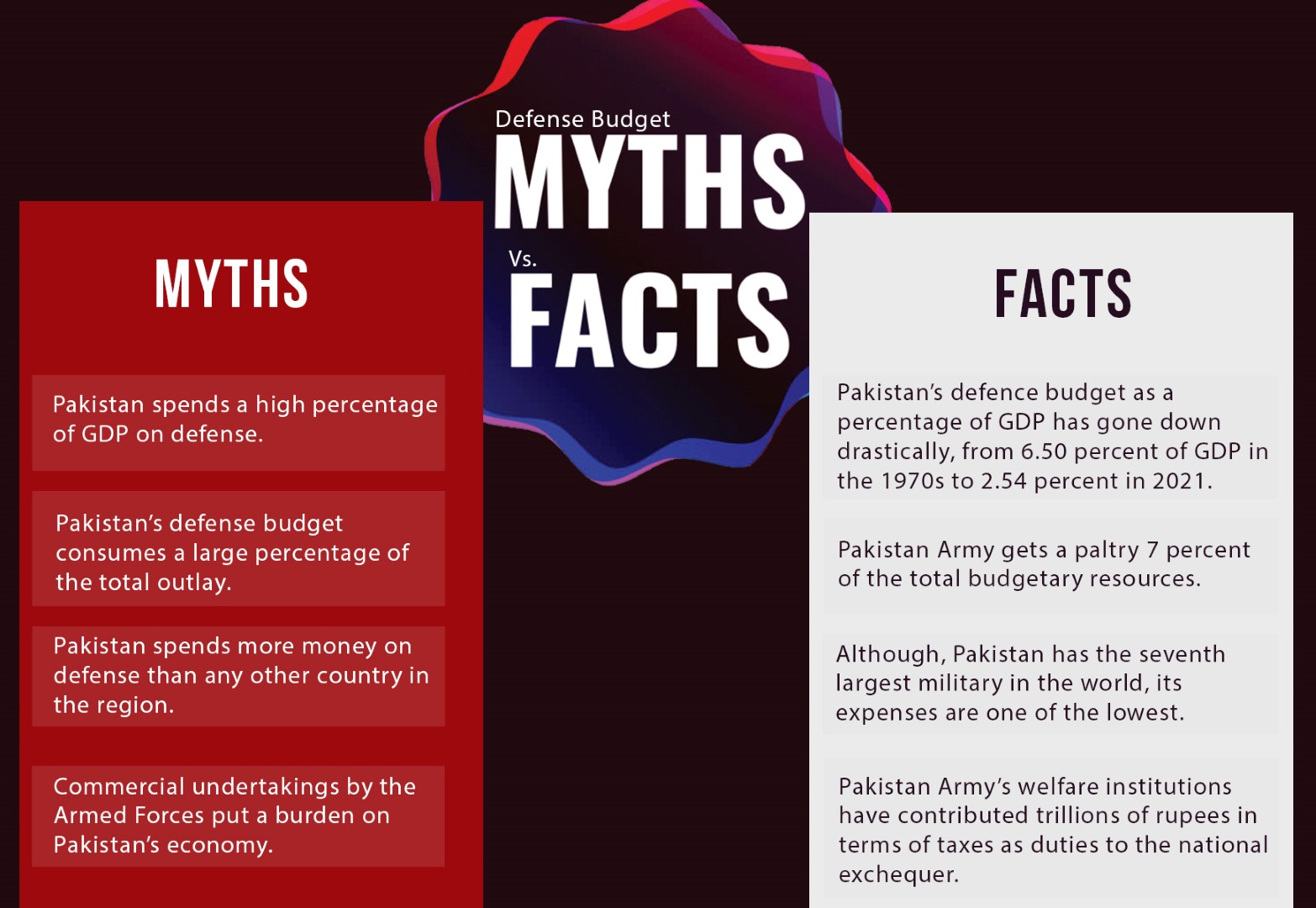 Hybrid Warfare against Pakistan and its institutions has been debunked previously, however, debunking the myths and propaganda regarding defense budget is also required, so as to highlight the monetary concessions Pakistan Army has made for the economic betterment of Pakistan.
Despite facing unprecedented challenges/threats, both on the western and eastern fronts, as well as hybrid warfare challenges, Pakistan Army did not demand an increase in its defense budget in order to support the country’s economy. Over the past fifty years, Pakistan’s defence budget as a percentage of Gross Domestic Product (GDP) has gone down drastically, from 6.50 percent of GDP in the 1970s to 2.54 percent in 2021.1 In Budget 2021-22, ‘Defense Services’ was allocated Rs. 1,370 billion out of total budgetary resources of Rs. 8,487 billion, which is merely 16 percent of the total budgetary resources. Out of this 16 percent allocation, Pakistan Army’s share is Rs. 594 billion. In effect, Pakistan Army gets a paltry 7 percent of the total budgetary resources. Pakistan Army, in the year 2019, had also relinquished Rs. 100 billion of its budgetary allocation to support the economy of the country.
The recent report of Stockholm International Peace Research Institute (SIPRI) places Pakistan at 23rd position in the list of world’s top 40 countries with the highest military expenditure, one position below as compared to 2020, which shows Pakistan Army’s commitment to assist the government by reducing the military expenditure. According to SIPRI Military Expenditure Database and The Military Balance from the International Institute for Strategic Studies, countries that spend more on defense in comparison to Pakistan (2.54 percent of GDP)2 include Oman (12 percent of GDP) Lebanon (10.5 percent), Saudi Arabia (8 percent), Kuwait (7.1 percent), Algeria (6.7 percent), Iraq (5.8 percent), UAE (5.6 percent), Azerbaijan (4 percent), Turkey (2.77 percent),  Morocco (5.3 percent), Israel (5.2 percent), Jordan (4.9 percent), Armenia (4.8 percent), Mali (4.5 percent), Qatar (4.4 percent), Russia (3.9 percent), U.S. (3.4 percent) and India (3.1 percent).3 This difference becomes even more pronounced while considering the actual allocation of funds. In comparison to Pakistan’s USD 8.8 billion defense budget, India spends USD 76 billion, Turkey spends USD 15.5 billion, South Korea spends USD 50.2 billion, Japan spends USD 54.1 billion, Saudi Arabia spends USD 55.6 billion, and Iran spends USD 24.6 billion on its defense. Whereas in Europe, the UK, France and Germany spend USD 68.4 billion, USD 56.6 billion, and USD 56 billion respectively. China spends USD 293 billion and the U.S. leads the stats by spending USD 801 billion on defense budget. According to SIPRI, India's military spending of USD 76.6 billion is ranked third highest in the world. This was raised by 0.9 percent from 2020 and by 33 percent from 2012.4  Indian defense budget is nine times that of Pakistan’s.
Although, Pakistan has the seventh largest military in the world, its expenses are one of the lowest. The U.S. spends USD 392,000 per soldier, Saudi Arabia spends USD 371,000, India spends USD 42,000, Iran spends USD 23,000, while Pakistan spends USD 12,500 per soldier per year.5 In addition to restricting the defense budget to a bare minimum, Pakistan Army also took an unprecedented step of freezing the defense budget allocation in the year 2019. With this meagre defense allocation, Pakistan Army has not only kept its vintage equipment in a maintained condition, but has also inducted essentially required new conventional weapon systems/simulators, enhanced niche capabilities, cyber warfare capabilities, and introduced latest developments in missile and nuclear technology.
Despite having lower defense budget in comparison to contemporary armies of the world, Pakistan Armed Forces have not allowed any compromise on its professional standards. It is ranked as the ninth most powerful military in the world (Global Firepower Index) and it is the only army in the world that has successfully defeated the menace of terrorism. Pakistan Army has also contributed PKR 28 billion in FY-2020/21 as direct taxes to the national exchequer (on account of pay and allownces, rations and petroleum products procurements, and customs, etc).
Tax Contributions and Employment Opportunities
Fauji Foundation and Army Welfare Trust are not business ventures, rather as per their charter, they are welfare organizations/charitable trusts incorporated under the Charitable Endowments Act 1890. More than 73 percent of their income is spent on wards of shuhada (martyrs), war wounded persons (WWP), disabled soldiers and retired military 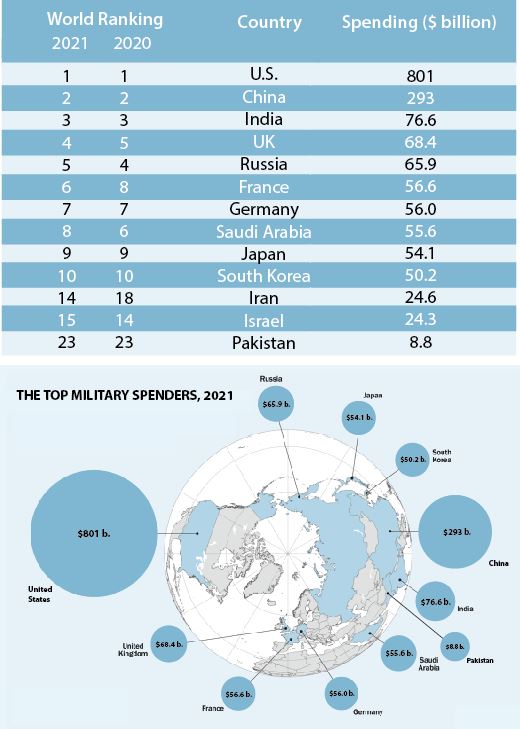 personnel. 17 percent of their employees are wards of shuhada, WWP and retired military personnel, while these organizations also provide jobs to a large number of civilians which account for 83 percent of the total.
In the year 2021, the limit of Fauji Foundation’s contribution for various welfare activities reached Rs. 1 billion per annum besides the funds incurred on own welfare drive upto Rs. 10 billion (education, training, health and stipends). Hence, it must be acknowledged that if Fauji Foundation was not providing for the welfare from its self-generated funds, then there would have been an additional burden of Rs. 10 billion annually on the government’s budget. Fauji group is one of the highest taxpayers as Rs. 150 billion was paid to the national exchequer in the form of taxes, duties and levies in FY 2020/21, whereas over the last five years, Fauji Foundation has paid Rs. 1 trillion to the government as taxes and levies. Moreover, Fauji group contributed Rs. 1.377 billion (2021-21) on account of Corporate Social Responsibility activities through donations and local welfare activities. The overall employees ratio in Fauji Foundation is 3,989 ex-service men and 22,652 civilians which makes 79 percent of civilian employees.
Similarly, Defense Housing Authority (DHAs) are self-generating units with no financial contribution from Army and strain on the defense budget. 8 DHAs (Karachi, Lahore, Islamabad, Peshawar, Gujranwala, Bahawalpur, Multan and Quetta) are affording employment to around 15,000 individuals, out of which only around 30-35 percent are ex-servicemen. In the last 5 years, DHAs have contributed approximately Rs. 20 billion in taxes to the national exchequer.
Overall, Army welfare organizations contributed around Rs. 156 billion as taxes per annum which is equivalent to approximately 26 percent of Army’s budget.
Special Communication Organisation (SCO) has generated 4,612 jobs in the communication sector. The organisation has laid 6,789 kilometers of Optical Fiber Cable in Azad Jammu and Kashmir (AJ&K) and Gilgit-Baltistan (GB), which has enabled state-of-the-art digital communication services in one of the most rugged terrains in the world.
National Logistics Cell (NLC) is the strategic need of the motherland for managing reserve transportation for the Armed Forces during war. It employs over 6,500 civilians/lower ranks ex-servicemen with an employment ratio of 78 percent civilian employees. It has paid Rs. 6 billion in taxes in the last five years.
Frontier Works Organization (FWO) has worked in diverse fields including construction of roads, railway lines and airfields, construction of dams, canals and barrages, tunneling/mining, and construction of residential and industrial infrastructure. FWO is a professionally competent organization, which competes on merit and has been delivering quality construction work. The inauguration of Kartarpur border crossing, Makran coastal highway, road network in erstwhile FATA as well as Balochistan, M-8, N-85 and rehabilitation of Sukkur Barrage and construction of Pakistan’s first special hospital to treat infectious diseases at Islamabad in only 40 days are cases in point. FWO is also contributing by educating youth with skilled training at Construction Technology Training Institute (CTTI) and FWO Institute of Technical Education (FITE) from which 34,000 students have graduated.
Pakistan Army’s welfare initiatives in agriculture sector not only help deserving officers and soldiers, but have contributed immensely by making the barren lands cultivable, through capacity enhancement of farmers, generating jobs and addressing food security concerns. 14,920 direct jobs and 49,600 indirect jobs have been created.
Boosting Defense Exports
Military diplomacy has played a crucial role in revitalising Pakistan’s foreign relations. It has complemented state institutions in achieving the national objectives as well as providing economic support. This is evident from the exponential growth in Pakistan’s arms exports, which is a result of successful military diplomacy. According to Ministry of Defense Production (MoDP), in the last five years, an unprecedented boost in the defense exports (approximately Rs. 60 billion) and Inland Sales (approximately Rs. 70 billion) was accomplished.
In the year 2019 alone, Pakistan Aeronautical Complex (PAC), Kamra secured the export of JF-17 to Nigeria for USD 184 million and contract finalization of 12 Mashshaks to Iraq worth USD 33.33 million. Heavy Industries Taxila undertook rolling out of indigenously manufactured Al-Khalid tanks at one-third cost of the international market. In addition to generating exports, MoDP paid approximately Rs. 6 billion taxes/duties to the national exchequer annually and generated 8,000 jobs in the defense production sector.
Pakistan Army has remained a highly competent and effective military force despite having meagre resources. With budget allocation much less than many armies compared in strength and firepower, Pakistan Army has successfully thwarted the challenges faced by the country. The propaganda against budgetary allocation to the army is also a part of the Fifth Generation Warfare, in an attempt to turn the population against its own army. While receiving only about 2.5 percent of the total GDP as budget, Pakistan Army’s welfare institutions have contributed trillions of rupees in terms of taxes as duties to the national exchequer. These welfare institutions have also employed a majority of civilians, accounting to almost 80 percent and have generated funds of Rs. 10 billion annually for welfare purposes, relieving the national exchequer of this burden as well. Pakistan Army continues to ensure national security with meagre resources in order to support the overall economic condition of the country.