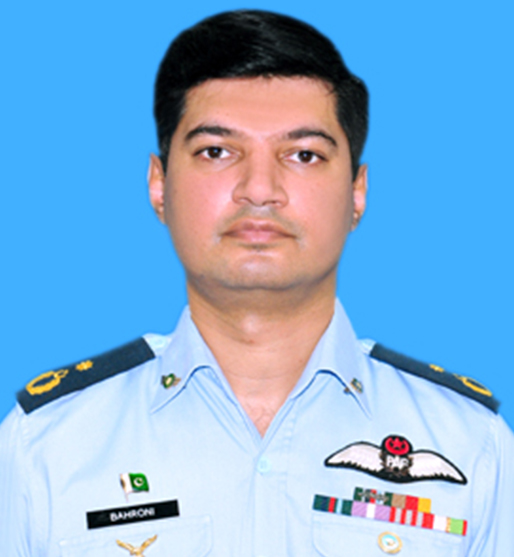 On December 2, 2017, a grand ceremony was held at PAF Base Nur Khan to celebrate the 75th anniversary of No. 6 Air Transport Support Squadron. Air Chief Marshal Sohail Aman NI(M), Chief of the Air Staff, Pakistan Air Force, who was the chief guest at the occasion, also unveiled a commemorative postage stamp which has been issued by the Pakistan Post to pay tribute to the services rendered by No. 6 Squadron during the past 75 years. War veterans, former Air Chiefs and a large number of retired and serving officers were in attendance. A well-crafted documentary highlighting the glorious history of this magnificent squadron was shown during the ceremony.

The squadron was raised on December 1, 1942 at Trichinopoly under the command of Squadron Leader Mehar Singh. Equipped with Hawker Hurricane aircraft, the squadron was assigned the Tactical Reconnaissance Role while the Burma campaign was in full swing during the World War II. Due to its valuable contributions on the Burma Front in 1943, two of its pilots earned the Distinguished Flying Cross for their gallantry while its Commanding Officer was decorated with the Distinguished Service Order for his exemplary leadership during Burma campaign. In April 1947, months before Independence, the squadron moved to Drigh Road, Karachi and was re-equipped with the Douglas C-47 Dakota, thus changing the role of the squadron to air transportation.

April 13, 1948 marked the historic day when a 6 Squadron’s Dakota flew Quaid-i-Azam Muhammad Ali Jinnah from Karachi to Risalpur, where Father of the Nation delivered the famous historic address and thus set the direction for Pakistan Air Force. Then again, on September 12, 1948 three Dakotas of No. 6 Squadron were flown in close formation to pay tribute to the Quaidon his funeral ceremony. The year 1949 was marked by rapid changes and indigenization for the squadron. The Freighters were modified to carry 4000 lbs Block Buster Bombs under each wing. The new capability thus brought the name Medium Range Transport and Bomber Squadron.

The saga of joint operations with Pakistan Army dates back to those times when No. 6 Squadron was fully involved in support of 12 Division of Pakistan Army that was marking its footprints in Northern Areas of Pakistan. During this time the idea of carrying out tactical missions was conceived and executed with professionalism. Later on, the first Minimarg and Gultari aerial drop missions were conducted in November 1957. In August 1959, while Northern Area Operations were in full swing, the squadron shifted to its present location and started the most demanding and dangerous Shimshal and Passu drop aerial missions.

March 1, 1963 was a historic day in the history of the squadron; the C-130 Herculesentered the arena and changed the doctrine of PAF Air Transport Operations for the times to come. Months after the induction of state-of-the-art Hercules, clouds of war started gathering on the horizon in early 1965. The War of 1965 is the saga of heroic performance of our fighter pilots and remarkable feats displayed by the crew of No. 6 Squadron. The heroes of No. 6 Squadron used the Hercules in a versatile and unique manner that would be remembered by our adversary for ages. Never would have the designer of Hercules dreamt that this aircraft would be used as a bomber in the pitch dark night against the most challenging air defence of that time. Offensive bombing missions were flown all across the eastern border and eleven aircrews were awarded gallantry medals; the maximum among all PAF squadrons.

In 1971 war, the enemy once again tried her luck against the fervour of our gallant heroes. With the added advantage of past experiences of the 1965 war and with innovative ideas of our predecessors, C-130s were once again called to action. Bombing missions were again flown by the mighty Hercules, the most accomplished being the attack at Jaisalmir which inflicted heavy damage on the Indian Air Force Technical Complex.

On April 29, 1972 No. 6 Squadron became the first PAF Squadron to receive the Squadron Colour in recognition of its outstanding performance in Kashmir Operations and Indo-Pak wars of 1965 and 1971.
During the late 60s when the foundation stones of the Karakoram Highway (KKH) were being laid, No. 6 Squadron was at nation’s service to airlift heavy machinery, personnel, rations and huge equipment to Gilgit. Pakistan Air Force established an air bridge between Chaklala and Gilgit for the construction and timely completion of the 8th wonder of the world.

The C-130s were also excessively used for critically needed national and international relief efforts. On December 26, 2004 tsunami struck South East Asia with a strong jolt. No. 6 Squadron displayed exemplary professionalism during tsunami relief operations in Sri Lanka, Maldives and Indonesia. On the fateful morning of October 8, 2005 a massive earthquake measuring 7.6 on Richter scale jolted the northern areas of Pakistan and played havoc on life and property. PAF immediately responded to the nation’s call and Chaklala became the hub of all relief operations. No. 6 Squadron worked with unparalleled zeal and established air bridge with the affected areas to support casualty evacuation and provision of relief goods. Similarly, the monsoons of 2010 brought the most horrifying floods that resulted in devastation of human lives, crops, and national asset. As always, Transport fleet came up to the nation’s expectations in this hour of need by extending all out support and provided relentless assistance to the flood victims. The squadron remained extensively involved in Intelligence, Surveillance and Reconnaissance (ISR) and relief operations for floods of 2011 as well.

Our cunning enemy treacherously occupied Siachen in 1982 which led to a standoff that continues till date. On request of Pakistan Army, the squadron undertook the uphill task of transporting heavy machinery, howitzer guns, ammunition and soldiers to Skardu and Gilgit for the initial build up. At the same time, the squadron also evacuated large number of Pakistan Army’s soldiers who became victims of frostbite and other serious injuries. Soon after, the squadron was tasked to conduct aerial delivery missions at Paiju Drop Zone in support of Pakistan Army troops deployed at Siachen. Flying through narrow valleys over some of the largest glaciers of the world, these missions demand highest level of professionalism, skill and accuracy, which has always remained the essence of transport aircrew. These challenging missions continue even today.

On May 28, 1998, when Pakistan successfully tested its nuclear devices in response to Indian nuclear tests, No. 6 Squadron was again at the forefront. During these crucial times it played a key role in transporting the scientists and finally the nuclear devices to Quetta in a short period. Dr. Samar Mubarakmand remarked: “I must say that Pakistan Air Force has made a tremendous contribution to the conduct of the entire nuclear experiments and the atomic tests. The 6 Squadron and the C-130s not only had a great contribution in transporting nuclear devices to Quetta from Islamabad, but they also carried members of our team before and after the detonations were completed.”

The 9/11 attacks on USA changed the complete global geo-political scenario in general and for Pakistan in particular. When the United States launched attacks on Taliban-controlled areas of Afghanistan, Pakistan decided to join the international community in the War against Terror. This led to volatile situation on our western as well as sea borders. Therefore, to guard the Pak-Afghan International Border and to cater for any attack from sea side on south, Operation Al-Mizan was launched in mid-October, 2001. It was a high level, tri-services operation executed to counter threats generated in post-9/11 scenario. C-130s were extensively used in the transportation of Army troops and Air Defence units for the operation. Nearly all the missions were flown during the foggy nights under complete RT silence. In December 2001, when Pakistan was engaged in Operation Al-Mizan, Indians launched full-scale military exercise leading to escalation on the Eastern Border. In response, Pakistan launched Operation Sentinel. As usual, No. 6 Squadron was the first to take part in the operations. Transport fleet deployed the entire war assets along with PAF personnel in record time thus preventing the enemy to make any mischief against the motherland. Air Chief Marshal Mushaf Ali Mir paid tribute to the transport element on December 12, 2002 during his visit to the base. He wrote in the visitors’ book, “An outstanding achievement made by our PAF Base, Chaklala during Operation Al-Mizan and Operation Sentinel. You were the ‘Battle Winners’; we salute your dedication and professionalism.”

Following the aftermath of Pakistan joining the GWOT, there was a dire need to break the backbone of terrorists active in tribal areas of Pakistan. Once again, in order to accomplish this task, No. 6 Squadron was bestowed with the herculean task of ISR to have real time picture in the headquarters and to shooters both in air and on ground. The C-130s were further modified for laser designation for dynamic targeting thus minimizing the sensor to shooter time. Jelled with the fighter elements of PAF, the transport aircrew conducted many successful missions during Operations Rah-e-Rast, Rah-e-Nijat and Zarb-e-Azb with zero collateral damage and thus broke the backbone of terrorists in the area of operation. Where the most advanced air forces of the world failed to achieve the desired results, Pakistan Air Force once again proved its mettle by ensuring no collateral damage; thanks to the valuable support provided by No. 6 Squadron.

Besides operational tasks, No. 6 Squadron participated in Royal International Air Tattoo (RIAT) 2006 along with the renowned air forces of the world. PAF C-130 became the star of show and bagged all three trophies for static display and team competitions. PAF returned to RIAT 2016 winning Concours D’ Elegance Trophy for the best static display during the competition.

Never before June 7, 2017 the mighty Himalayas overseeing the Skardu valley had heard the growl of C-130 propellers in reverse in the dark of night. NVG operations in Skardu are the major milestone in the history of Squadron.

Be it the conduct of tactical operations in the snow covered mountains of Northern Areas or the ISR operations in the rugged terrain of FATA; be it the support of sister services in joint operations or the relief efforts both in-land and abroad, No. 6 Squadron has left an indelible mark in the history of Pakistan Air Force. Celebrating the 75th anniversary of this magnificent squadron, under the leadership of Group Captain Raja Usman the aircrew earnestly pledged to continue serving the sacred motherland for the times to come.