Reaching the Highest Mountain of Europe

Mount Elbrus is located in the Caucasus mountain range in the Kabardino-Balkaria region of Southern Russia near the border with Georgia. With an altitude of 5642m, it is the highest peak of Europe. Located almost 1500 km south of the capital, Moscow, Mount Elbrus is part of the famous Seven Summits Mountaineering Challenge comprising the highest peaks of each of the seven continents. Elbrus has two summits, both of which are dormant volcanic domes. The taller west summit, 5,642 m (18,510ft), was first climbed in 1874 by a British expedition. It is considered to be a daunting peak with a kill ratio of almost 25 per year, greater than Mount Everest. 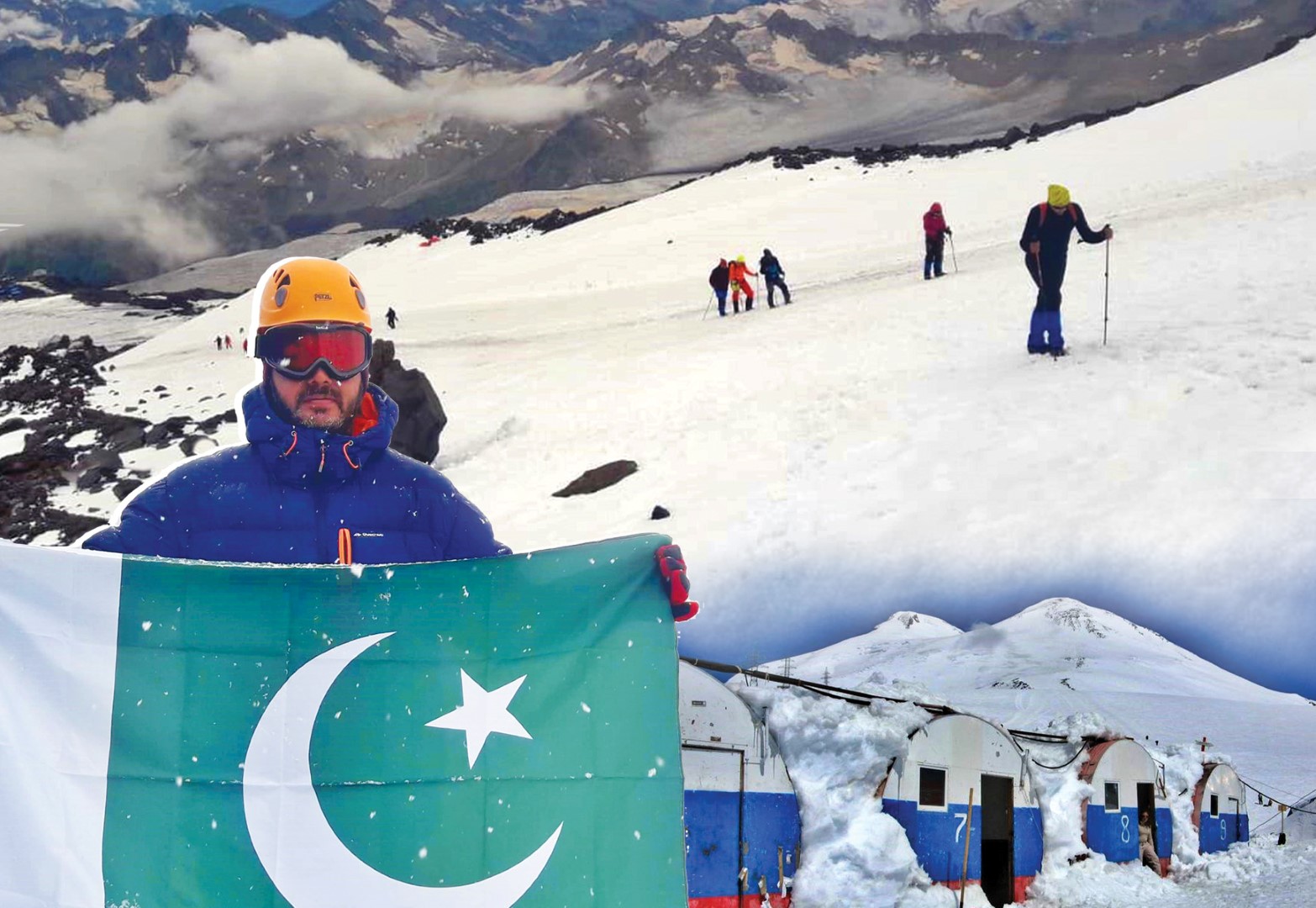 From Moscow to Mineralnye Vody
Our journey started from Moscow’s Vnukovo International Airport. An almost two hour domestic flight, full with locals, took us to the Mineralnye Vody in Southern Russia. From the airport, we rented a car for a four hour journey towards the town of Terskol. Our taxi driver, Anzur, was a Caucasian Muslim. Despite the language barrier, he tried his best to inform us about the passing countryside. The vast land, green fields and beautiful mountains all along made this journey worth remembering. 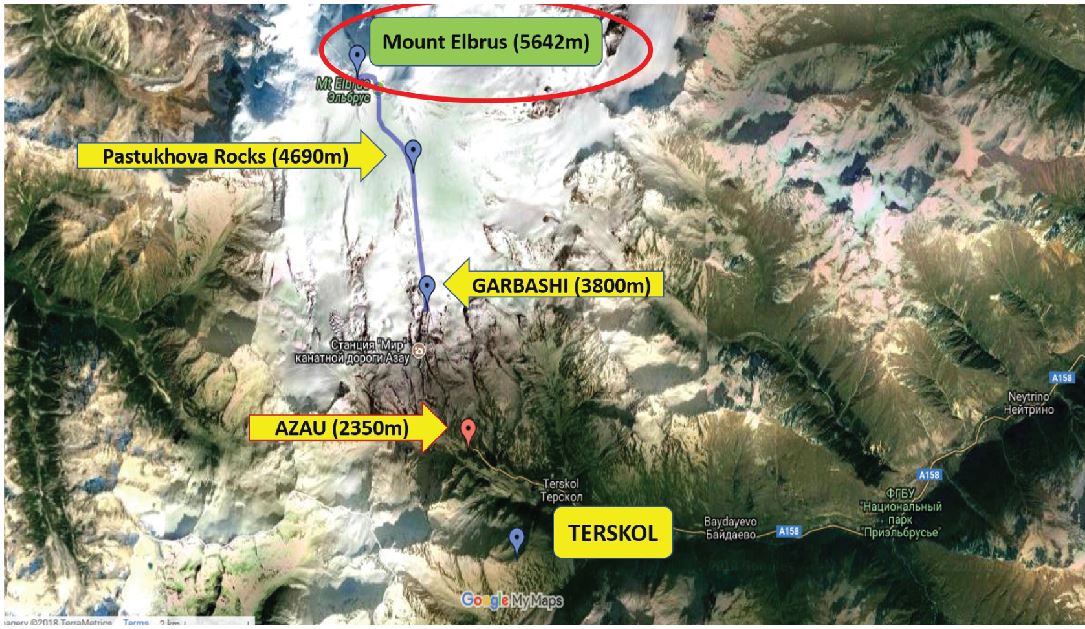 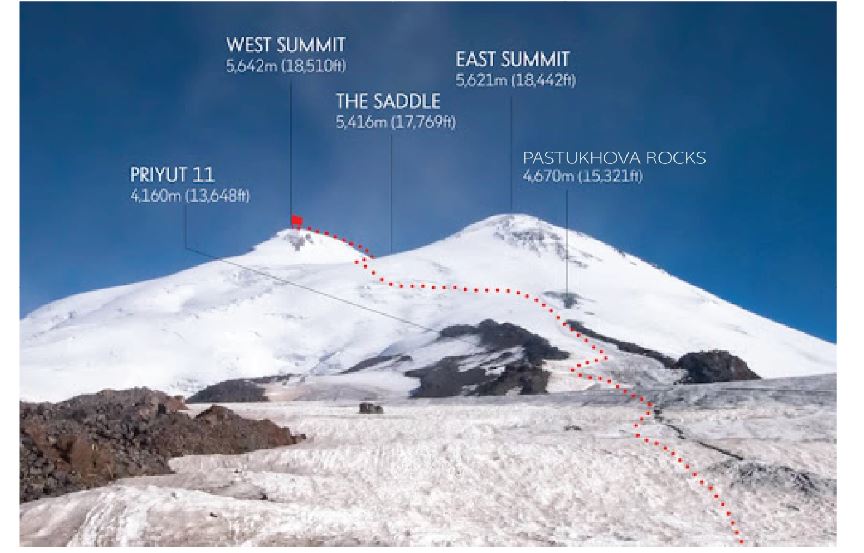 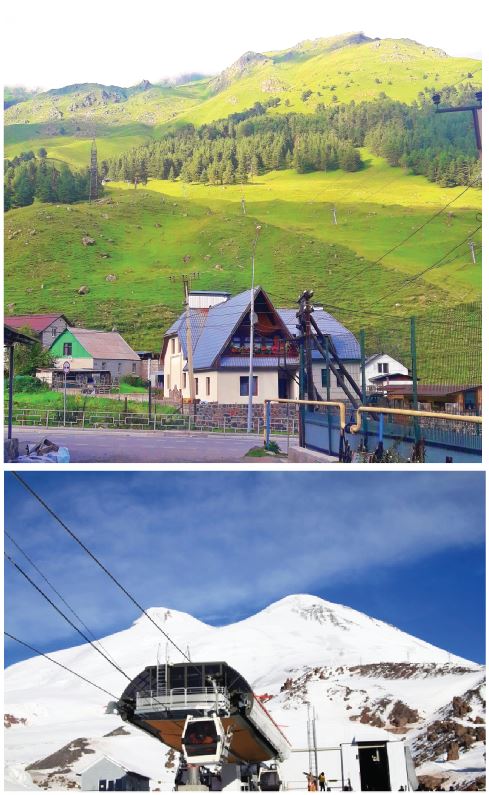 Terskol – A Calm and Beautiful Town
Terskol is a small town which can easily be a candidate for one of the most beautiful places in the world. Majority of its population is Muslim. Across our hotel was a mosque; listening to the Azan (call to prayer) in this part of the world was an elevating experience. With minor military presence, Terskol had significant tourist activity. Majority of the shops were managed by young Muslim ladies. It is a calm, clean and peaceful place. At night we met our climbing team leader, Mr. Yuri, from Belarus, and finalized the details of our climbing plan.
Azau (2500m) – Towards Mount Elbrus
The next day, we started with completing some paperwork from the local authorities, getting climbing equipment and shopping for some basic groceries. Our climbing group was comprised of Irene from Latvia, Olek from Moscow and Yuri. Our start point was Azau, a small town almost three kilometers from Terskol. Azau is a cable car and ski lift station. From Azau, people can take the cable car or lift up to Garabashi camp. However, for acclimatization we decided to hike our way upwards. This meant a gruesome four hour climb with cable cars and ski lifts going over our heads.
Mir Station (3500m)
On our way up towards Garabashi camp, we reached a prominent concrete structure with a newly constructed station for chair lifts and cable cars known as Mir Ski Lift Station. Located at an altitude of 3500m, Mir Station had a few living huts for tourists as well as a coffee shop and some souvenir shops. The area is not really an option for staying unless one has serious altitude problems and cannot go higher up the mountain.
Life at Garabashi (3800m)
Garabashi is the base camp for climbing Elbrus. It is normally a finish point for the tourists and starting point for the climbers. It is also the last stop for cable cars. From here snow vehicles called snowcats are available to go up to Pastukhova Rocks. A number of barrel huts, renovated from the inside, are used as accommodation for the climbers. We spent almost three days at Garabashi Camp (3800m) waiting for the appropriate weather window to begin our summit push. We met a team from Jordan led by the famous climber and writer, Mustafa. The Jordanian team was not ready to climb in this weather, but our team leader had other plans.
Shelter Maria (4100m)
Shelter Maria is located at 4100m on Mount Elbrus. There are big containers with two bedrooms each, a kitchen with gas stove, table, benches and electricity (after 7pm). From Garabashi one can also take a snowcat to Maria Shelter. However, we only passed by this shelter while on our way up.
Pastukhova Rocks (4700m) – Acclimatization
The next two days on Mount Elbrus were for our acclimatization. We were to climb from our base in Garabashi (3800m) to the prominent black rocks on Elbrus known as Pastukhova Rocks, located at 4700m. Our training included climbing with crampons and the basic use of an ice axe etc. On the first day, we were able to reach almost 4400m, however, due to severe weather we had to retreat to the base. The next day, once the weather allowed us, we started our climb and this time we were able to reach Pastukhova Rocks after many hours of arduous climbing. Our team member, Irene, got sick and decided to abandon her Elbrus attempt. By now we were well acclimatized and had to wait for the appropriate weather window for our final summit push. 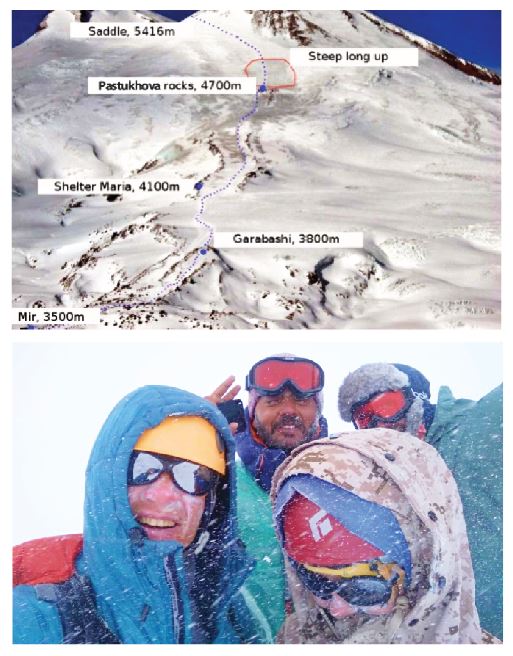 Summit Push
On the next day, the weather was hardly ideal for a summit push. However, given the fact that the weather forecast for almost a week ahead was not very encouraging, Yuri decided to give it a try. We were instructed to be ready by midnight. In total darkness we slowly started ascending the mountain. A few hours later, with the sunrise, things started to become clear. By the time we reached Saddle Point (5416m), the weather began to deteriorate. Soon we were caught by gushing winds and rain started pouring. With almost 200m left of the summit, returning was no more an option. Now the technical part of the climb started and we carefully moved in a single line following fixed ropes. The final 200m, with strong winds and light showers, the climb became much worse than our expectations. Finally after an arduous climb of about six hours in total, someone ahead of me announced that we had reached the summit. It was all white everywhere and there was hardly anything to be seen.
On Top of Europe
Finally, after struggling for about an hour in snowfall and harsh winds, we managed to reach the top. Due to the snowfall, our visibility had reduced to a few feet. There was no view that could be enjoyed and it was all about getting the crucial summit picture. With the help of my Russian colleague, Olek, I was able to pitch the green flag and get a picture on the highest point of Europe.
Descent
Descent started at about 9 am. The exuberance of reaching the highest summit of Europe was soon taken over by fear. For the 200m sharp descent, I was following the team leader who was in a hurry to go down due to the deteriorating weather. After almost four hours of descending, amidst showers of rain and chilling winds, we reached a relatively plain snowfield. Our team leader instructed to follow me, however, soon something strange started to happen as I could not see properly. Constant exposure to whiteout without sun glasses was now taking its toll. I could barely manage to see the black jacket of my guide walking ahead of me. The distance between us kept on increasing and my fears got worse. For almost forty haunting minutes, the walk was all about keeping an eye on the black jacket and following it mindlessly. At times it felt as if I would not be able to follow him. However, I was persistent till we reached a point near the rocks with human activity. The fearsome phase was over and from then onwards it was just rushing down to Garabashi. By the time we reached Garabashi, it was almost half an hour to catch the last cable car downhill. With most of the climbing gear on, we rushed to the hut, packed everything and got into the cable car. Almost half an hour later it dropped us to Azau and we caught a jeep to our hotel in Terskol. 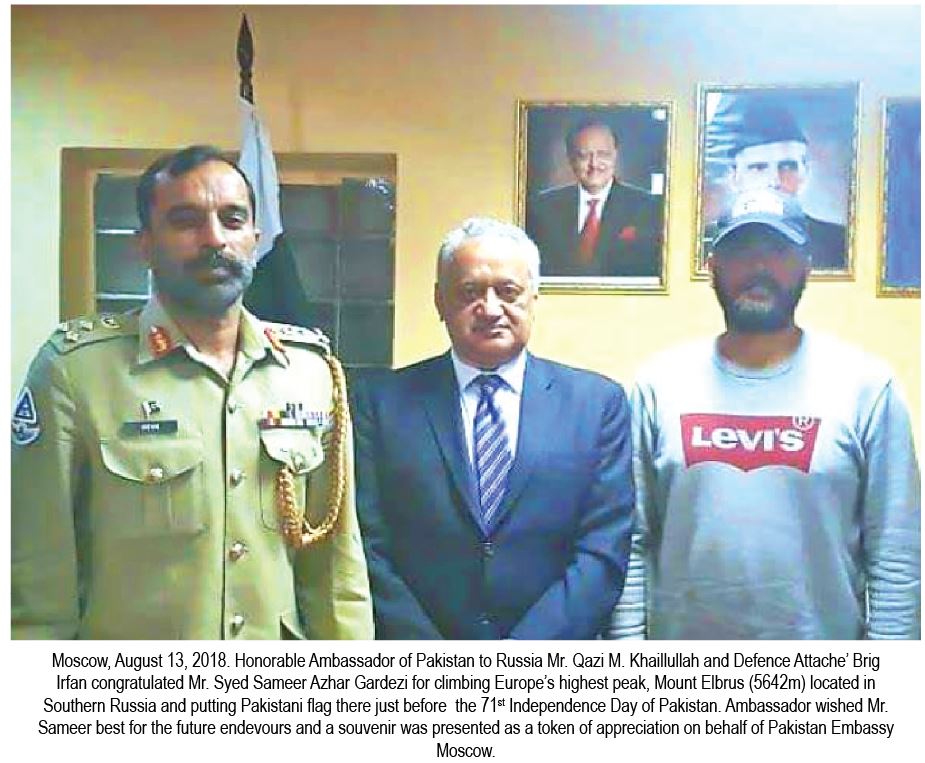 Technically speaking, Mount Elbrus is not a difficult climb, however, it is not always the altitude that makes a climb hard. Effect of severe weather, particularly wind, rain, snow or the occasional conditions of whiteout, as was in our case, can transform an otherwise normal climbing experience into a challenging one. In the words of one of our climbing partners who had summited Mount Everest a year ago, “Climb on Mount Elbrus in these weather conditions was more challenging than Mount Everest. We were for sure a bit luckier on the highest peak of Europe than many others that year who lost their lives or limbs.”

The writer is a computer engineer and mountain enthusiast.
E-mail: [email protected]