The United Nations was created at the end of the Second World War to save the succeeding generations from the scourge of war. More than seven decades later, a world free of wars and conflict remains an elusive dream. There are many reasons for conflict. Sometimes these are created to satisfy the inexorable appetite of powerful nations through civil wars etc. Chaos and conflict suits great powers which provides them a ready-made excuse to intervene in resource rich areas, which have sometimes been their former colonies. This is especially true for some conflict zones in Africa. There are times when international involvement becomes inevitable because of the level of violence and bloodshed caused by wars and insurrections. The sheer scale of mayhem aggravated by drought or other natural disasters also require urgent need for humanitarian missions. 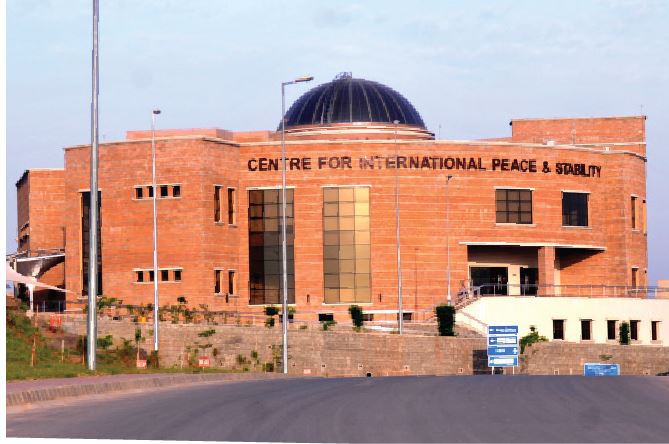 Theoretically, UN peacekeeping or peace enforcement, is resorted to once diplomacy fails to resolve the conflict. In the words of the military sage, Clausewitz, it is an extension of policy by other means. The former is done with the consent of the parties to the conflict. The three cardinal principles of traditional peacekeeping include the consent of parties to the conflict; use of arms only in self-defence; and impartiality of the peacekeepers. Under Chapter VII of the UN Charter, a peacekeeping mission can be deployed without the consent of the parties. Modern peacekeeping is more intrusive. UN peacekeeping forces are fully armed and involved in engaging with the miscreants. Intervention Brigades are specially trained and armed to undertake kinetic operations. Robust peacekeeping involves the use of force at tactical levels with the authorization of the Security Council and consent of the host nation and/or main parties to the conflict.
A peacekeeping mission requires consensus at the level of the UN Security Council (UNSC). One notable exception was the Suez Canal Crisis in 1956. Fearing a conflict of interest because of the involvement of two UNSC members in the ensuing conflict i.e., France and the UK, the UN General Assembly (UNGA) passed resolution 1001 (ES-1) to establish the UN Emergency Force (UNEF). The plan submitted by the UN Secretary-General (UN SG) envisaged the deployment of the UNEF on both sides of the armistice line. Egypt accepted receiving the UN Forces, but Israel declined. The first UNEF lasted until 1967. The second UNEF was deployed from October 1973 to July 1979.

Peacekeeping is a stopgap arrangement to halt bloodshed and keep the warring parties involved to observe the ceasefire. The deployment of peacekeepers can be prolonged if the conflict persists. Ideally, a political process should always be undertaken in parallel to resolving the conflict. The most irresolvable conflicts of our times have been Kashmir and Palestine. Political process in these two cases has been halted because of the intransigence of the Indians and Israelis. Pakistan has been host to one of the oldest military observer groups in the history of peacekeeping; the UN Military Observer Group in India and Pakistan (UNMOGIP), because India has unilaterally absorbed the illegally occupied state of Jammu and Kashmir into two Union territories.
Over the years, peacekeeping has evolved into a complex operation that is put in place after careful planning to best handle the challenges that are expected in the mandate zone. Peacekeeping is difficult because the soldiers are not operating in their own country, they are deployed in zones thousands of miles away. The problems in these conflict zones are not of their own making, the solutions often do not match the mission statement and the rules of engagement are vague and hazy. A lot of hard work and preparation goes into putting a peacekeeping mission together. The execution of these missions is another ball game altogether. 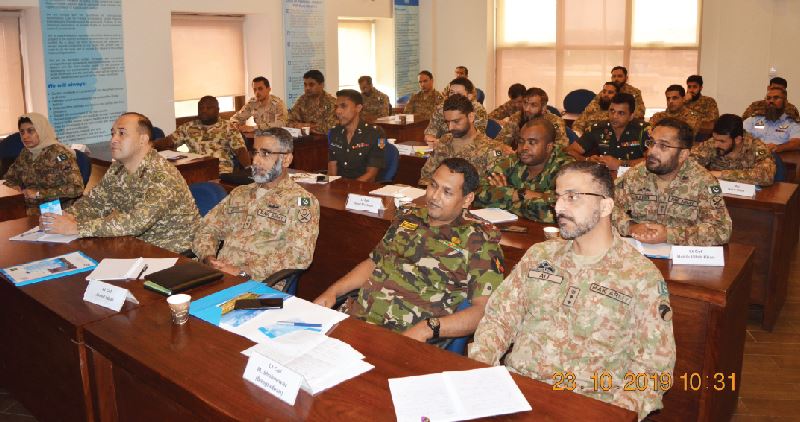 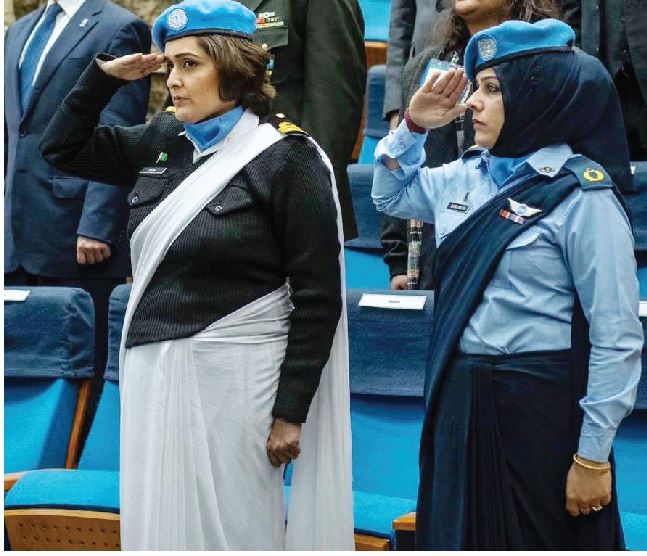 Since peacekeeping operations are different from the conventional operations of war taught at military academies and Staff and War colleges, these require specialized training. In the traditional sense, soldiers were only trained to fight wars. A modern-day peacekeeper is trained to prevent fighting and bloodshed. Peacekeeping is an operation that is not strictly military in nature. It involves diplomatic and negotiation skills, policing duties, nation-building and media handling.
Peacekeeping training has become a specialized art form and many troop contributing countries have their own peacekeeping schools. Most of these schools are military institutions. A leap of faith was required to establish the Centre for International Peace and Stability (CIPS) at the National University of Sciences and Technology (NUST), Islamabad. The aim was to not only teach peacekeepers the basic concepts of peacekeeping but also to study it as an academic subject. This fusion of practice and philosophy of peacekeeping has emerged as a successful model. CIPS offers a hybrid system by merging the theory and practice of peacekeeping. Typically, two-week long courses are conducted year round to teach the peacekeepers the specific nature of deployment such as military observers, staff officers, logisticians, contingent commanders, company and battalion commanders. These peacekeeping trainings are restricted to the military peacekeepers. Sometimes courses are offered to policemen and women also. Some courses are offered to those with interest in peacekeeping such as the one on the ‘protection of the civilian courses.’ The courses are designed according to the syllabus recommended by the UN Department of Peacekeeping. The teams from New York regularly evaluate these courses to ensure that these are in line with the established international best practices. Peacekeepers underscore the importance of understanding the UN policies such as zero tolerance to sexual exploitation and abuse (SEA) and respect for the local culture and traditions. The peacekeepers are taught to be impartial and not to use force as the first resort. In order to keep gender balance, special courses are conducted for the Female Engagement Teams.
The academic programs include MS and PhD in Peace and Conflict Studies. These programs are in line with the directions of the Higher Education Commission (HEC) of Pakistan. The scholars have a ready access to the peacekeeping practices and lessons learnt. Seminars/webinars and roundtables on ongoing conflicts keep the students updated and whets their appetite for research.
CIPS is unique in many ways. It is the only peacekeeping training centre located in a top ranking university. Its distinctive location allows the practitioners to mingle with scholars to learn about international peace and conflict resolution. Its teaching faculty includes not only veteran peacekeepers but also highly qualified teachers. This is the only peacekeeping centre which has been visited by two UN Secretary-Generals and a President of the UNGA. It was inaugurated by UN SG Ban Ki-moon in 2013 and then upgraded to a regional hub for peacekeeping training by Antonio Guterres in 2020. UNGA President María Fernanda Espinosa Garcés visited CIPS in 2019. Both Secretary-Generals and President of the General Assembly acknowledged the high human price that Pakistan has paid in serving humanity under the UN banner. 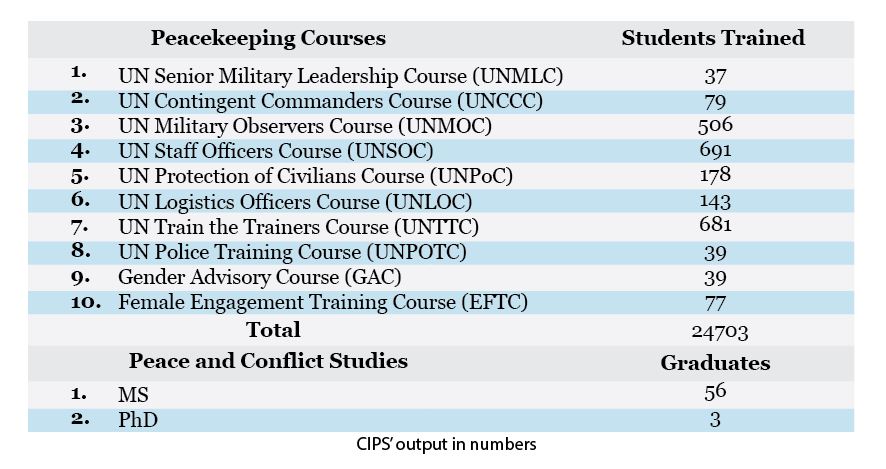 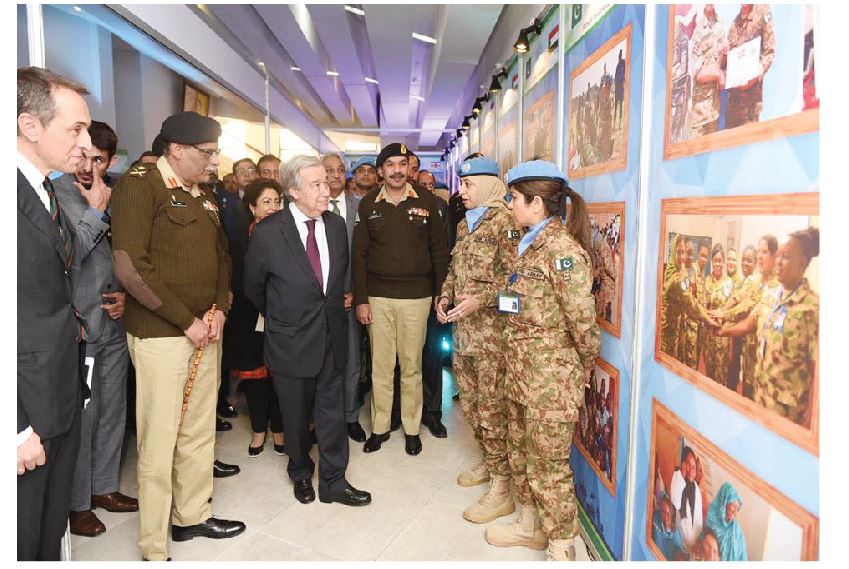 Secretary-General Guterres, speaking at NUST on February 19, 2020, called CIPS one of the most important institutions in the world that supports peacekeeping activities in an extremely competent and professional way. He maintained that institutions like CIPS are improving the knowledge and understanding of threats to peace and sources of instability. He was of the opinion that CIPS and other peacekeeping training institutions were doing an important work in the service of peace!
The Secretary-General was merely reaffirming the fact that CIPS has set high standards for peacekeeping and has emerged as the leading peacekeeping training institute in the world.
CIPS has not only trained own peacekeepers but also from twenty other allied countries as well.

The writer is a retired Brigadier and PhD. Presently he is the Associate Dean and founding member of Centre of International Peace & Stability (CIPS) at the National University of Sciences & Technology (NUST), Islamabad. He is also Honorary Colonel of the Battalion, 7FF Regiment.
E-mail: [email protected], [email protected]