The Battle of Jahman Bridge is a display of courage and camaraderie, where not only soldiers but cooks and laundrymen also became the frontline defense against enemy’s aggression.

Jahman is a sleepy little village on the Indo-Pak border, about 10 km upstream of Bedian along the Bambawali-Ravi-Bedian (BRB) link canal. In 1965, it was even smaller, with only a few brick houses. The population comprised barely a couple of hundred souls. The bridge on the BRB opposite the village was insignificant too, fit to take light traffic only. This bridge later earned some mention in the war diaries of the sub-unit that stoically stood in its defense in September 1965. But it was more than a quarter century later in 1991 that Jahman Bridge and the ‘battle of the bridge’ really came out of obscurity. The battle owes its recognition to a revelation by a senior Indian commander in his account of the 1965 War. More of it a little later. 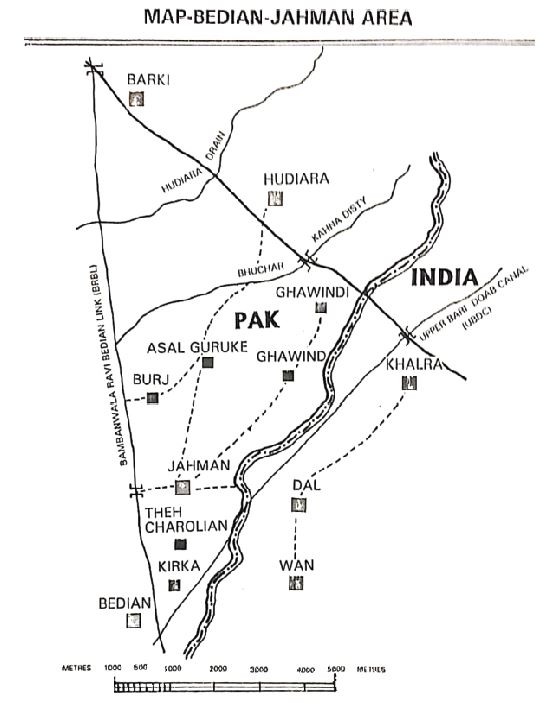 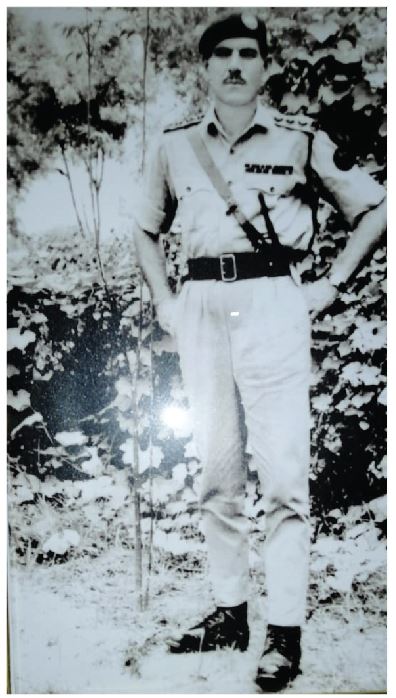 went to see Havildar Fateh Khan, only to find him fainted with excessive bleeding. Fateh was evacuated immediately. Sepoy Abdul Rehman, who claimed to have fired his RR the maximum the previous night, lay motionless in his position — his ammunition exhausted. Hit by a tank shell, he had embraced shahadat. When the day broke, Sadiq again led out a search patrol. He counted 19 enemy dead including a Major and two JCOs and collected a lot of weapons and other equipment bearing marking of 6/8 GR (Gorkha Rifles). Enemy also left behind six tanks bogged down, three of them partially damaged by RR fire. Two wounded enemy soldiers, hiding in a filed, were taken prisoner.
Meanwhile, two successive and fierce attacks on Jahman Bridge had finally convinced the Brigade Headquarters in identifying where the Indian 7 Infantry Division’s primary interest lay. While Bedian axis had only witnessed artillery duels since September 8, the enemy was desperate to breakthrough at Barki axis. Having failed at Barki, they were now attempting penetration through the thin gap astride Jahman Bridge. Sadiq’s LOBs (left out of battle) had performed a military miracle at Jahman Bridge — and twice! To expect more from them might be suicidal. The next morning, the company commander received clearance to return to Jahman Bridge.
When the company arrived around mid-day, there was jubilation all around. Luddi and Khattak dance followed a hot lunch. Defenses were reorganized and aggressive patrolling resumed. Two fighting patrols combed out the entire area for enemy stragglers and destroyed the bogged down tanks to prevent their recovery during the night. The enemy made a half-hearted attempt on September 14 but did not close up. He remained content with occupying the deserted village of Jahman. Sadiq and his handful of LOBs had wrested initiative from the enemy.
Enemy’s Own Truth
The war diary of 15 FF and other historical literature of Pakistan Army records enemy strength as mentioned above: one to two companies of 5 Guards and a tank troop on night September 11/12 and a battalion (6/8 Gorkha Rifles) with two troops on the night of September 12/13. In his book, War Despatches — Indo-Pak Conflict 1965, published in 1991, Lieutenant General Harbakhsh Singh, commander Western Command and in charge of land operations against (West) Pakistan, makes a startling disclosure. Describing the conduct of operation of 7 Infantry Division from September 11-18, he writes, “After the capture of Barki on night 9/10 September by 65 Infantry Brigade, 48 Infantry Brigade was given the task of mopping up enemy pockets on the Eastern Bank of Ichhogil Canal, including the capture and destruction of the bridge in the vicinity of Jahman SG 7882. 48 Infantry Brigade attacked the bridge on night 11/12 September with 5 Guards. The attack was not pressed home and on orders from the Brigade Commander, the battalion withdrew to the Brigade Defended Sector at Hudiara. A second attempt for the same objective was made the next night with two infantry battalions (6/8 Gorkha Rifles and 5 Guards) supported by two troops of Central India Horse and the whole of Divisional Artillery. Once again, due to poor leadership, the attack was a failure – six of the eight tanks were bogged down and brigade pulled back to its firm base. The enemy in the meantime reinforced its garrison on the bridge. The Divisional Commander attributed the failure of our attack to lack of guts and determination on the part of the Brigade Commander, Brigadier KJ Shahaney, and he was relieved of his command on September 14, 1965. The next day, September 15, Brigadier Piara Singh took charge of the formation. Meanwhile, appreciating that the opposition at the bridge was now clearly beyond the capacity of 48 Infantry Brigade, the formation’s task was modified to the clearance of only Jahman. This, 48 Infantry Brigade accomplished on September 18 employing 6/8 Gorkha Rifles and 19 Maratha supported by two troops of Central India Horse”. Another Indian military writer, Major General Jogindar Singh, corroborates Harbakhsh Singh’s account.
Sadiq and his thundering thirty had achieved much more than they had thought! They had vanquished an enemy thirty times (30:900) larger on the night of September 11/12 and over sixty times (30:1900) larger on the night of September 12/13. Their steadfastness had been rewarded far more than promised:

Havildar Fateh Khan and Sepoy Abdul Rahman (shaheed) were decorated with Tamgha-i-Jurat, the latter posthumously. Sepoy Ayub Khan earned an Imtiazi Sanad. Subedar Sadiq was cited for Sitara-i-Jurat but unfortunately did not receive one. His reward — recognition by the enemy — is unparalleled.
Subedar Muhammad Sadiq rose to be a Subedar Major of two Piffers battalions successively and retired as an Honorary Captain to his Village Lehri, Tehsil Kahuta, District Rawalpindi.
After a protracted struggle by his senior unit officers, Honorary Captain Sadiq was invited to General Headquarters (GHQ) on August 25, 2006 and on behalf of the COAS, was given a cash award of Rs. 2 lacs by the Adjutant General. On October 18, 2018 at the age of 94, Sadiq departed to his eternal abode and was buried in his village Lehri, Tehsil Kahuta.
May he rest in peace. Inna lillahe wa inna ilaihe rajeoon.

The writer is a former CI, NDC, DG ISPR and former ambassador to the UAE for over three years. He was honoured with High Order of Independence by His Highness the late Sheikh Zayed Bin Sultan Al Nahyan.
E-mail: [email protected]