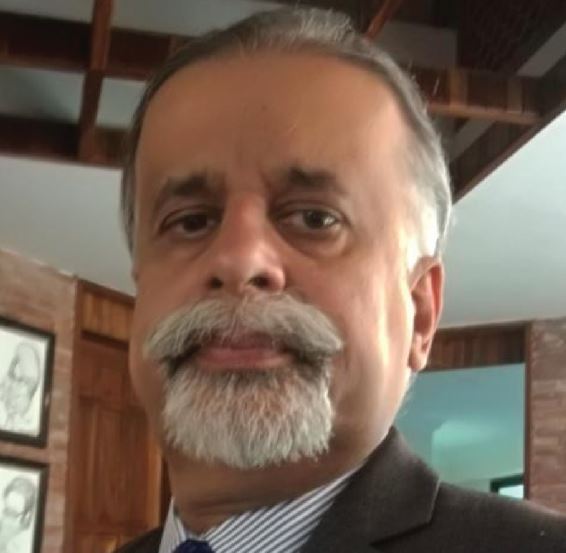 Military victories are not only achieved through gallantry and valor, but also through intelligence and battlefield tactics. The Battle of Batapur highlights the intelligence of one such engineer from Engineers Corps, who valiantly fought against the enemy despite worse odds.

Malik Aftab Ahmed Khan did his Civil Engineering from the prestigious NED University of Engineering and Technology, Karachi in 1950. With a degree in hand, he opted to join Pakistan Army as a part of the Corps of Engineers to serve the nation. His knowledge and prowess in the field was soon acknowledged as he was posted to the newly established Military College of Engineering, Risalpur, to teach and train the young aspirant military engineers.
During one of his assignments in Balochistan, he carried out a detailed analysis of the subject of oil and petroleum issue associated with Iran and Pakistan and its importance for the country. He wrote an article on this intricate and complex issue, titled “Persian Pipeline”. Apart from its importance as a fuel supply line, he also suggested the method for its protection along the hostile territory by establishing mini battalion-size cantonments along its proposed route through Balochistan/Sindh. The article was published by the Military College of Engineering. President Ayub Khan read the article and liked the concept. As a result, Major Aftab was sent abroad (Swindon, UK) on a three year scholarship to pursue advanced studies in the field of “Reinforced Concrete”.
The article eventually played a part in the planning of 2,775-kilometre Iran -Pakistan Gas Pipeline to deliver natural gas from Iran to Pakistan.
During the 1965 Indo-Pak war, Major Malik Aftab was posted in 4 Engineers Battalion, which he later commanded (from July 21, 1967-January 25, 1969). He also had a tenure in Frontier Works Origination (FWO) as an Officer-in-Command of 122 Q&C Battalion (July 24, 1974-Feberury 4, 1975), where he designed and completed the Abbotabad-Manshera Bypass on Karakoram Highway (KKH) among other projects at the KKH. From June 24, 1975-December 10, 1975, he commanded the Training Battalion at Engineers Centre, Risalpur.

The motto of Pakistan Army`s
Corps of Engineers is Rooh-e-Rawan, meaning
the moving spirit. 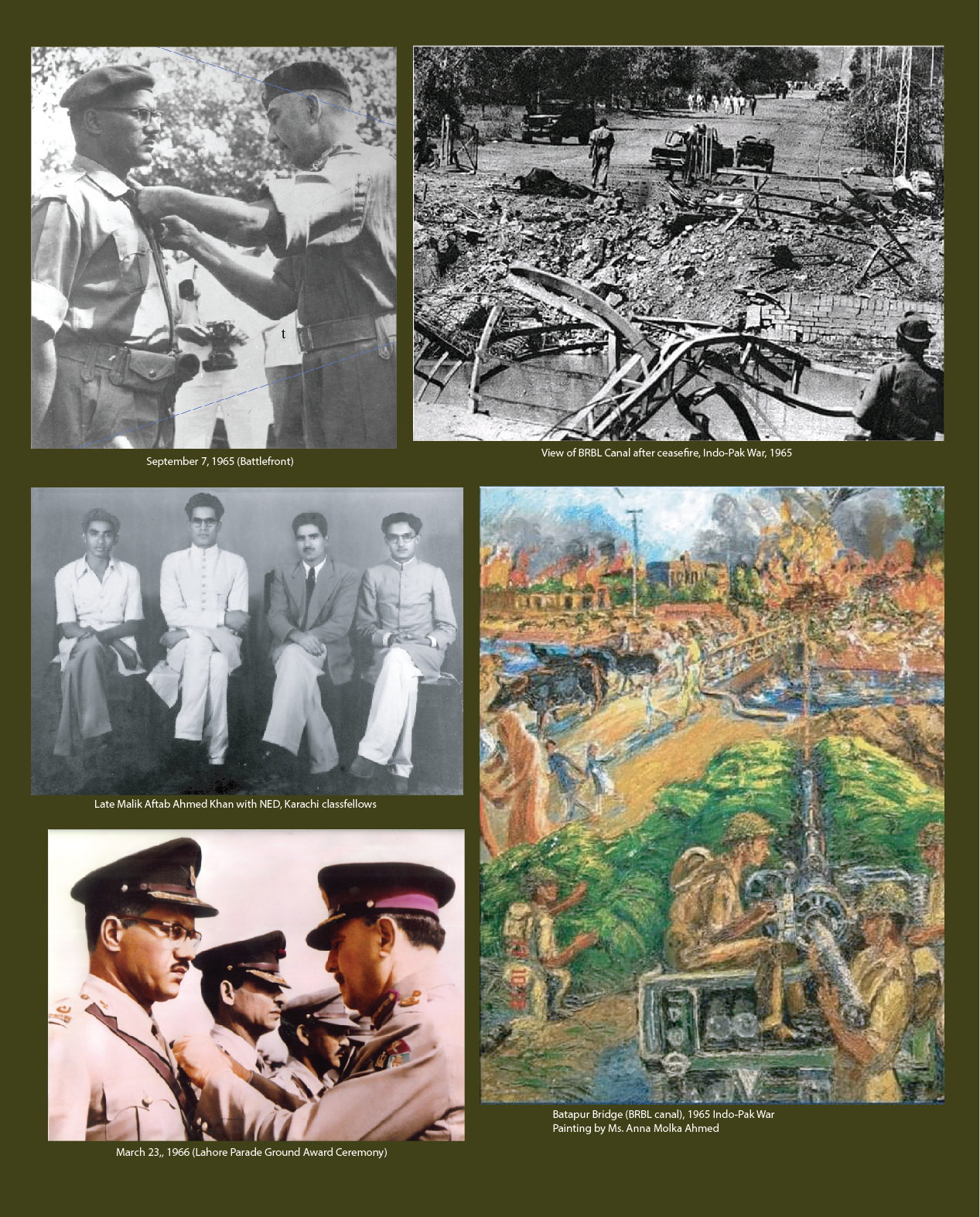 For those who are familiar with munitions and in particular mines, can well visualize the dangers associated with opening mines and pressing their contents hard into another container so that the newly prepared improvised charges are able to destroy the very strong concrete bridge built by the British. All this involved a high level of risk. At any stage, a slight mistake or oversight could have not only blown those involved in doing this work, but cause devastation in the surrounding area due to the presence of a lot of ammunition in close proximity.

Major Aftab, utilizing his prowess in engineering, determined the most suitable location under the bridge where the improvised weapon was to be installed.

Finding no other option, the local Commander agreed to the innovative plan. Major Aftab got this precarious and sensitive work started under his personal supervision and within a short period of time, this improvised weapon was ready. The immediate problem was to choose the appropriate location under the bridge from where it would be detonated and completely destroy the bridge. If the bridge was only to be partially damaged, the risky venture would be pointless, as the approach would still be open. The enemy would still be able to cross the canal and if it did, there were no significant natural obstacles on its path to the city of Lahore.
Major Aftab, utilizing his prowess in engineering, determined the most suitable location under the bridge where the improvised weapon was to be installed. Initially, this task was assigned to a non-commissioned officer, but he was martyred by the enemy fire during the initial reconnaissance or recce. At this point, Major Aftab, rejecting the advice of his colleagues and subordinates, decided to personally plant the explosives under the bridge. 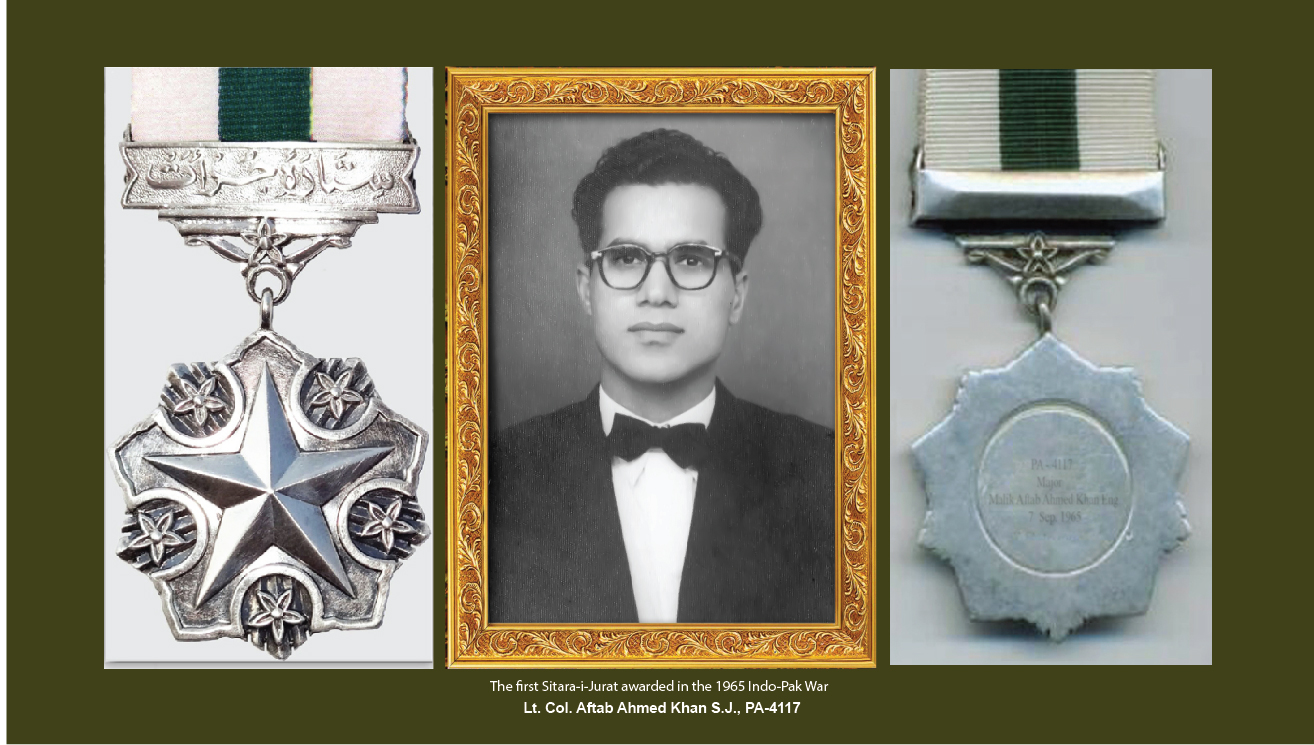 Around midnight, on receiving a signal on the field telephone, the shelling from the Pakistani side intensified at once such that the Indian gunners were forced to retreat. Taking advantage of this short break, Major Aftab along with his small team, under a shower of the bullets from both sides reached the designated place from the bottom side of the bridge. There was still the nerve-racking task of tying the necklace type string of explosive charges together.
All this took considerable time and eventually the explosives were tied under the bridge. The weapon’s bond to the bridge needed to be aptly pressed for a meaningful explosion. Otherwise, it would explode but without inducing the desired level of vibration into the concrete of the bridge, hence only minor damage would occur. The laborious work continued all afternoon and well into the night. The team returned without any injuries.
The much awaited time had finally arrived. A few minutes after midnight, the area resounded with explosions and the bridge was finally demolished at 0045 AM on September 7. This demolition severed the pathway for the advance of the invading army. This feat proved to be decisive in halting the advance of the Indian army, and not even an inch of the land on the Lahore front could be captured by India. In an official announcement on the morning of September 7, Major Malik Aftab Ahmad Khan was awarded the first Sitara-e-Jurat of the 1965 War.

The key to the 10 Division’s success lies in the very direction of the counterattack, which caught the Indians by surprise. With nearly all the bridges on the BRB Link Canal destroyed within the first twenty-four hours of the battle, the enemy did not expect so quick a reaction from the defenders.

Having demolished all the bridges over the BRB Link Canal on September 6-7, the need for reconstructing one was realized as soon as the 22 Brigade was ordered to launch the counterattack. Therefore, 4 Engineers Battalion was ordered at 0330 AM on September 8 to construct a Class 50 Bailey Bridge for the troops inside the bridgehead. B and C Field companies, which were committed to minelaying in front of the second layer (depth) positions of the infantry were immediately switched over to bridge construction.
It took considerable time to transport the bridging equipment and men to the bridge site. The equipment was assembled by about 0130 AM on September 9, and the sappers finally got to work under intense fire. The bridge was ready at 0600 AM on September 9, costing 27 casualties including 6 killed from the Engineers Battalion.
The key to 10 Division’s success lies in the very direction of the counterattack, which caught the Indians by surprise. With nearly all the bridges on the BRB Link Canal destroyed within the first twenty-four hours of the battle, the enemy did not expect so quick a reaction from the defenders.
Sacking of Major General Prasad
Major General Niranjan Prasad, a veteran of World War II, commanding 15 Infantry Division, got so desperate that on the morning of September 7, he decided to bypass the Batapur Bridge, as the brave soldiers of 3 Baloch would not let him cross over. Instead, he tried to attempt a breakthrough from Ravi Siphon/Bhini bridge side and came forward himself, but was ambushed by the counter attacking force of 18 Baloch (3 Sindh now). He had to abandon his jeep and escape on foot. General Prasad was so demoralized that he refused to continue operations. He was sacked and replaced by Major General Mohinder Singh.
With the change of command, fresh reinforcements were sent to 3 Jat to augment their efforts of advancing. However, the Indian evil designs were shattered and not even an inch of land on the Lahore front could be captured. Indian dreams of a grand dinner party in honor of their Commander-in-Chief were met with defeat and utter humiliation.
Reminder and Tribute
East of Lahore, where the BRB Link Canal intersects GT Road, stands tall the Batapur Monument. It is a tribute to the Battle of Batapur and in memory of those brave soldiers who laid their lives while defending the motherland and denied India crossing over the BRB Link Canal.