One of Azerbaijan’s ancient settlement and culture centers, and part of Karabakh region, Nagorno-Karabakh is a small yet strategic piece of territory located in the center of the South Caucasus region. The general region includes the northeastern flank of the Karabakh Range of the Lesser Caucasus and extends from the crest line of the range to the margin of the Kura River lowland at its foot. Despite its small size (4,400 square kilometers, or about 1,700 square miles) and population1 (fewer than 150,000 people). Nagorno-Karabakh has historically been an ethnically and religiously mixed region because of its mountainous terrain and location at a crossroads between continents. Nagorno-Karabakh, along with much of the rest of the Caucasus, was contested by the Ottoman Turks and Persians for hundreds of years. 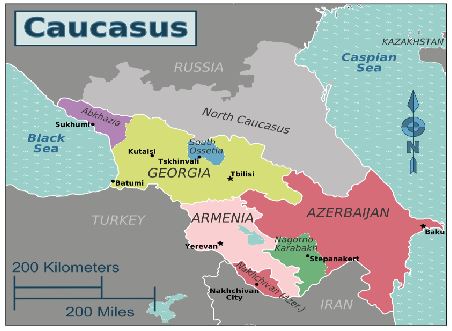 The Russian Empire emerged as a major player in the Caucasus during the 18th century.2 During the same period, in order to win the support of ethnic Armenian Christians against Muslims, Czarist Russia promised Armenians a separate country in the South Caucasus. On November 10, 1724, Peter I issued a decree allowing the Armenians to settle in Baku and other regions of Azerbaijan. These Armenians later laid claims to Azerbaijani lands.3 The Russian Empire remained the dominant power in the region until the Russian Revolution of 1905 weakened it and the subsequent revolution of 1917 brought about its collapse. Azerbaijan was briefly independent (1918-1920) following the collapse of the Russian Empire. By 1921, the Bolsheviks had taken over the entire region, and the Caucasus was incorporated into the Soviet Union as the Transcaucasian Socialist Federative Soviet Republic in 1922. The Soviet Republic was then reorganized in 1923 into three separate republics: Georgia, Armenia and Azerbaijan. “Nagorno-Karabakh Oblast” was placed under the jurisdiction of the Azerbaijani Soviet Republic by then People's Commissar for the Affairs of Nationalities Joseph Stalin.4
Annexation of Nagorno-Karabakh by Armenia and Establishment of Republic of Artsakh
Starting from February 1988, numerous public demonstrations were held in the Armenian capital Yerevan supporting the incorporation of the Nagorno-Karabakh into the Soviet Republic of Armenia. Next, the Nagorno-Karabakh Oblast Committee of the Communist Party held an unprecedented unofficial referendum to rejoin Armenia.5 Azerbaijan appealed to Moscow to condemn such actions, but Moscow’s response was slow and not to Baku’s liking. After the collapse of the Soviet Union, the autonomous region of Nagorno-Karabakh rejected unification with Armenia and declared complete independence in early 1992.6 Ethnic violence erupted in the region. This violence quickly spread into a full-scale military confrontation. By mid-1992, Armenian military aggression resulted in expelling of all Azerbaijanis from Nagorno-Karabakh, leading to the territory's current Armenian-dominated ethnic balance. According to undisputed sources, in 1992 Armenian military committed what is now called the Khojaly massacre, when at least 613 civilians were killed.7
Furthermore, the Lachin corridor, a land bridge from Nagorno-Karabakh to Armenia, was established. By 1994 Armenia’s military belligerence resulted in the occupation of 20 percent of the territory of the Republic of Azerbaijan including Nagorno-Karabakh region and seven adjacent regions. These districts are: Khojaly, Shusha, Lachin, Khojavand, Kalbajar, Aghdam, Fuzuli, Jabrayil, Gubadly and Zangilan, as well as 13 villages in Tartar district, 7 villages in Gazakh district and 1 village in Sadarak district in Nakhchivan.8 Armenia even refused to retreat from seven adjacent districts until the recognition of Nagorno-Karabakh’s independence and its security guaranteed. Furthermore, Armenia declared the occupied areas as Republic of Artsakh, the country which has not been recognized by the UN or any other country. 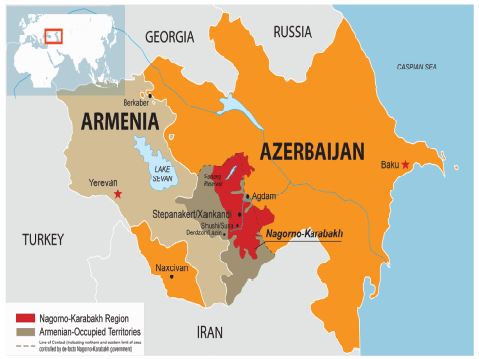 During the Armenia-Azerbaijan’s Nagorno-Karabakh conflict, more than one million Azerbaijanis became Internally Displaced Persons (IDPs), while 20,000 people were killed in military operations and 50,000 were wounded and became disabled. With an end to the war, a formal peace process was launched by the Organization for Security and Cooperation in Europe in 1994, with Russia, the United States and France serving as co-chairs along with Armenia and Azerbaijan. In 1993 the UN Security Council adopted four resolutions: 822, 853, 874 and 884 declaring all occupied areas including Nagorno-Karabakh as a part of Azerbaijan. However, 26 years and countless meetings and summits later, no substantial progress has been made for the diplomatic solution to the Nagorno-Karabakh conflict.9
Azerbaijan-Armenian War 2020
The latest clashes between Azerbaijan and Armenia began on the morning of September 27, 2020, along the Nagorno-Karabakh Line of Contact, which had been established in the aftermath of the First Nagorno-Karabakh War (1988-1994). In response to the clashes, Armenia declared martial ylaw and total mobilization of forces, while Azerbaijan introduced martial law and a curfew, later declaring partial mobilization on September 28, 2020. In general, Azerbaijan this time had quantitative and qualitative superiority over Armenia in terms of arms and ammunition. While Azerbaijan mobilized 80,000 troops with state-of-the-art drones, artillery, armour and infantry, Armenia fielded 65,000 personnel armed with Russian equipment. This time round well-prepared Azerbaijan’s forces made good progress on the battlefield. On October 9, 2020, Azerbaijani military liberated Jabrayil, and later Hadrut. 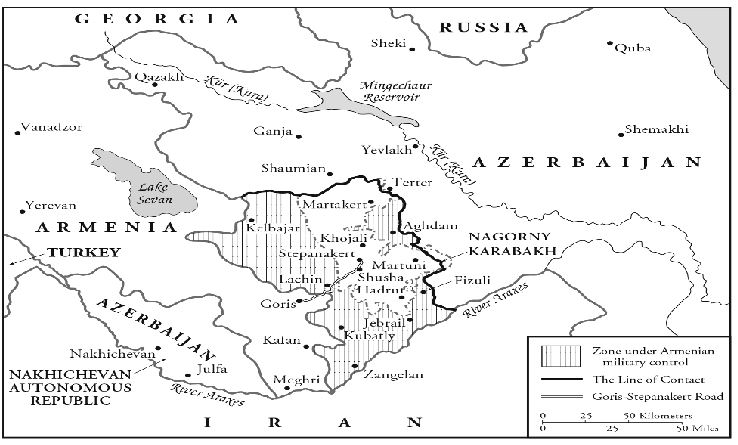 Meanwhile Füzuli was freed on October 19, 2020. Azerbaijan’s military then advanced westward towards the Hakari river valley and captured the Khoda Afarin Dam and Khoda Afarin bridges.10 On October 22,  2020, Azerbaijan’s forces captured Agbend thereby securing its border with Iran. Azerbaijan’s forces then maneuvered north towards the Lachin corridor, the sole highway connecting Armenia with Nagorno-Karabakh. By October 26, 2020, Armenian/Artsakh counterattack was able to halt the Azerbaijan’s advance within 25 kilometers of the Lachin corridor. On October 26, 2020, a U.S.-brokered ceasefire came into effect, but fighting resumed within minutes. On November 8, 2020, Azerbaijan forces seized Shusha,11 the second-largest city of  Nagorno-Karabakh which is located just 15 kilometers from Stepanakert, the capital of Republic of Artsakh. At this crucial juncture, on November 10, 2020, with a flurry of diplomatic efforts a ceasefire agreement was signed among the President of Azerbaijan Ilham Aliyev, the Prime Minister of Armenia Nikol Pashinyan, and the President of Russia Vladimir Putin, halting  all hostilities in the area. The President of Artsakh, Arayik Harutyunyan, also agreed to respect the ceasefire.
According to the ceasefire agreement, it was decided that the opposing sides will keep control of their currently held areas within Nagorno-Karabakh, while Armenia will return some areas of the Nagorno-Karabakh region and three other regions namely: Agdam, Kalbajar and Lachin to Azerbaijan. Similarly, nearly 2,000 Russian peacekeeping troops are now deployed to Nagorno-Karabakh to implement the peace process. The peace deal also catered for the return of refugees to Karabakh and exchange of prisoners and dead bodies. Armenia also agreed to allow a transit corridor to be established between the western areas of Azerbaijan and Nakhchivan region.12
Pakistan’s Stance on Nagorno-Karabakh Issue
Bilateral relations between Pakistan and Azerbaijan were established on June 9, 1992 following the collapse of USSR. Pakistan was among the very first countries that recognized Azerbaijan. Azerbaijan and Pakistan enjoy strategic relations in all spheres of bilateral relations. Since Independence, Pakistan has fully supported Azerbaijan’s position on Nagorno-Karabakh. Due to Armenia’s aggression against Azerbaijan, Pakistan has taken the extreme stance of not recognizing Armenia as a country.  Pakistan is one of the few countries to recognize the Khojaly massacre, undertaken by Armenian forces against Azerbaijani people in 1992, as a genocide. In April 1993, a meeting of the Security Council of the United Nations, led by Pakistan, was held. The unanimously adopted United Nations Security Council Resolution 822 concerning the Nagorno-Karabakh conflict explicitly declaring it as part of Azerbaijan was passed. In addition, Pakistan as a member of the Organization of the Islamic Conference “On Aggressive Measures of the Republic of Armenia”, directed against Azerbaijan have always supported Baku’s stance.
During the present conflict, Government and people of Pakistan expressed their full solidarity with the brotherly nation of Azerbaijan and its people. Pakistan on September 27, 2020, showed its deep concern about the deteriorating security situation in Nagorno-Karabakh region after Armenian forces fired shells on Azerbaijan's civilian populations. “This could compromise peace and security of the entire region. Armenia must stop its military action to avoid further escalation," read the statement. "Pakistan stands with the brotherly nation of Azerbaijan and supports its right of self-defence," the Pakistan Foreign Office statement said. We support Azerbaijan’s position on Nagorno-Karabakh, which is in line with the several unanimously adopted United Nations Security Council resolutions, it added.
Meanwhile on October 9, 2020 Azerbaijan's Ambassador to Pakistan, Ali Alizada called on Chairman Joint Chiefs of Staff Committee (CJCSC) General Nadeem Raza at the Joint Staff Headquarters. During the meeting the CJCSC said that Pakistan Armed Forces fully support Azerbaijan’s position on Nagorno-Karabakh, which is in line with the several unanimously adopted United Nations Security Council resolutions. The Chairman also discussed with the Azerbaijan Ambassador the ways of further strengthening bilateral military relations between the two brotherly countries.
Analysis of Peace Deal and Future Prospects 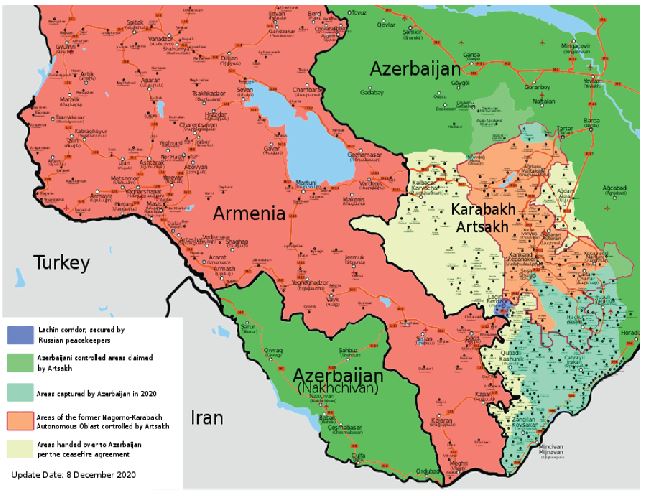 The map depicts the latest positions on ground of all the stakeholders after the implementation of ceasefire agreement.
If we critically look at the map, it is evident that Azerbaijan has been able to secure its all-occupied lands adjacent to Nagorno-Karabakh. Similarly, except for Lachin Corridor, Armenia does not have a land link with Nagorno-Karabakh anymore. Nagorno-Karabakh is now encircled by Azerbaijan from all sides. After consolidating its military positions in the liberated lands, Azerbaijan could sever Lachin Corridor, if required. However, deployment of Russian forces in the Nagorno-Karabakh region for five years to protect Lachin Corridor and other areas means that any military operations by Azerbaijan in Nagorno-Karabakh region could bring Russian troops directly in the conflict; an undesirable situation that Azerbaijan would avoid. The President of Azerbaijan wanted Turkish peacekeeping troops to be deployed alongside Russian troops in Nagorno-Karabakh but the Kremlin rejected the idea stating that since Turkey was not a signatory of the peace agreement, therefore Turkish peacekeeping forces could not be deployed in Nagorno-Karabakh. It is believed that by careful maneuvering Russia has not only been able to dilute Turkish influence but has somehow also sidelined outside powers such as the United States and France, which were not involved in the agreement. In the same context, Russia – which already maintains a military base in Armenia – has now been able to secure its military presence in the heart of South Caucasus i.e., Nagorno-Karabakh region for five years. These strategic moves have not only made Armenia totally dependent upon Kremlin militarily, economically and politically, but at the same time it has provided Russia with an opportunity to keep Azerbaijan engaged on favorable terms.
It is firmly believed that direct land links between Turkey and the Republic of Azerbaijan could further enhance Turkey’s growing influence in South Caucasus and subsequently in Central Asia, since this development runs contrary to Russian strategic designs in the region. Therefore, in these circumstances Kremlin is making every effort to restrict Turkish influence in the region since Turkish, American, and NATO’s (minus France) strategic interests converge in the Caucasus Region. Azerbaijan must align itself more closely with them. At the same time, Azerbaijan must repopulate all the areas which it has regained after war on priority; this would ensure that Armenia cannot retake them in the future. On the political front, Azerbaijani leadersip and people have displayed an unmatchable national resolve, clear vision, political stability, economic self-reliance and national unity that proved decisive during crucial phases of the recent conflict. On the military front, force development, state-of-the-art technology, and a combination of drones, artillery, armor and infantry has resulted in Azerbaijan’s military victory in the war. However, Azerbaijan should increase its fighter aircraft inventory to surmount enemy resistance in mountainous areas where armour/artillery cannot be deployed.
To conclude, it is opined that till the time Armenia completely withdraws from Nagorno-Karabakh region, historical tensions between Azerbaijan and Armenians would persist, which means that sporadic episodes of violence between them cannot be ruled out. However, strong presence of Russian troops reduces the probability of an all-out war between the two countries in near future. Durable peace in the area could only be achieved if UNSC resolutions are implemented without delay and Nagorno-Karabakh forms part of the Republic of Azerbaijan.

The writer is a retired Vice Admiral and was the Ambassador of Pakistan to Maldives.
E-mail: [email protected]

Note:  The article contains personal views of the author and cannot be associated with the policy of Government of Pakistan or any other state institution.