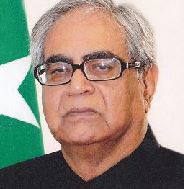 Air Commodore Mansoor Ahmed Shah was part of the team that laid down the very foundations of Pakistan Air Force (PAF) on August 14, 1947. He was born to Major Dr. Habibullah Shah and Captain Dr. Enid Flora Shah. He was commissioned in the Royal Indian Air Force on April 9, 1945 as a pilot and won the “Best Flying Progress” trophy. In those days native pilots were labelled unsteady, unsafe and unfit for operations. They were only considered fit for routine tasks. Mansoor Shah and other natives proved their British masters wrong. On independence, he opted for PAF and amongst other pioneers, put his head down in establishing PAF. The logbook page of Mansoor Shah on August 14, 1947 is decorated with Pakistan’s flag with the remarks: “To be effective, Air Force personnel should have an extraordinary breadth of vision, general knowledge, coolness of temperament, technical understanding, capacity of sustained hard work, plus extreme tact, honesty and unflinching loyalty to the colleagues and the cause. Pakistan Zindabad.”
Establishing bases and units, aircraft inventory, flying operations with only 200 officers (60 pilots) and 2,000 airmen, maintenance, logistics, administration, education and training, rehabilitation and morale of the split families in a new force were the challenges for the leaders and men of the newly raised PAF. Terms like hi-fi, air conditioned, stereo or fully loaded were not in use. Demands were few and officers went to work proudly on bicycles which were hired from the local contractor at the cost of Rs. 8 per month. The servicemen’s spouses would go out shopping on smoke belching public Omni buses.

He was a staunch follower of Quaid-i-Azam who envisioned a merit based and corruption free Pakistan. He was well aware of the Hindu mentality that considered Muslims a blot on the pure and beautiful body of mother India. Even though Mansoor A. Shah praised the professionalism of the first four British Air Chiefs, yet he also had reservations about the lack of the air power strength in Pakistan which was restricted to only using transport aircraft during Kashmir Operations in 1947. He commented, “Experienced RAF helped India plan and control the airlifting of Indian military formations to Kashmir making it difficult for Pakistani volunteer tribesman to survive”. He flew the first supply drop mission in December 1947 to Kashmir in a four-engine Halifax bomber, commonly known as death trap during those days due to its difficult handling. He managed successfully through the difficult terrain of the valley to deliver supplies to the fighters stranded there.
He contributed to the development of PAF through induction of Fury, F-86, B-57, F-104, C-130, F-6 and Mirages. As an outspoken officer he criticized the Super-marine attacker purchase by PAF. Rightly so, as it was not even procured by RAF. His daring action was on the night of September 12, 1965 when he blew the logistics lines of Indian Army moving on Amritsar-Gurdaspur railway lines, despite the fact that he was not supposed to fly in the enemy territory being a senior officer. His actions served as an example for his colleagues and peers.
He was an amazing pilot who flew all 29 types of aircraft in the use of PAF (piston engine and jet fighters, transport, reconnaissance and training) and had a total of 4,569 flying hours to his credit. He flew different types of aircraft i.e., a fighter and a transport aircraft the same day with a time difference of only a few hours. He also flew eight types of civilian aircraft in the use of Pakistan’s civilian agencies. Apart from enjoying the honor of commanding three PAF bases i.e., Chaklala (Noor Khan), Peshawar and Mauripur (Masroor), he also held the command of No. 12 Squadron.
He also served at PAF Academy Risalpur as an instructor as well as Acting Commandant and taught flying skills to the young eagles of PAF. He is regarded as a fatherly figure by his students, who still remember his teaching acumen as that of an ardent instructor. They appreciate his art of teaching air operations; an instructor who would give everything he had in his roster of knowledge and experience. One of his students, Zulfiqar Ali Khan, also rose to the rank of Chief of the Air Staff, PAF. He is remembered as an innovative and ingenius individual by his colleagues. He was graded an exceptional pilot by his seniors throughout the service. He was also earmarked to command PAF Base Dacca in November 1971 but could not proceed due to suspended flights between East and West Pakistan.

During his service he served as Director Plans, Director Training and Chief Inspector at Air Headquarters. He had the unique honor of serving at the important posts of Assistant Chief of the Air Staff (Training), Assistant Chief of the Air Staff (Administration) and Assistant Chief of the Air Staff (Operations). He was also the first officer to represent PAF at the Joint Staff level. Air Commodore Mansoor Shah was an expert war strategist. According to him, non-military writers credit the concept of pre-emptive strikes of PAF at the enemy’s airfields during 1971 as a replica of Israeli’s pre-emptive strikes of 1967 Arab-Israel War. He commented that these innovations were used by PAF during the 1965 War. Concept of joint warfare was conceived during his last years of service.
He knew air force is an expensive business requiring stupendous financial outlays. During actual armed conflict (because of the speed and range of modern aircraft, their tremendous flexibility and awesome capability and the very intricate technology involved), efficient utilization of an air force presents some of the most urgent, wide ranging, difficult and complex problems ever confronted by those responsible for the conduct of war. Due to devotion of these selfless officers, Muslim countries those days requested PAF for establishing and developing their air forces, and selecting the aircraft for their use.
He also had a deep insight of national and international politics. Starting from World War II till his last breath he inferred clear thoughts about international players’ trends. His philosophical ideas were a combination of divine power, space, and time as fourth dimension, Einstein’s Theory of Relativity, negative or positive infinity, concepts of electrons, quarks, bosons, photons, gravitations, cosmic rays, galaxies, black holes, neutrons, stars, red giants and white dwarfs etc. He penned down two books The Gold Bird and Flight through Life. He would often quote from the book of President Ayub Khan Friends Not Masters that U.S. had always been acting as a master instead of a friend.
He was an expert in narrating the jolly tales of the initial days of PAF. According to him, the enjoyment those days was low level flying. In one of the anecdotes a pilot went so low over the Arabian Sea that a jumping fish got entangled in the oil cooler of his flying machine. He would recall the club life at Peshawar Club which had a vibrant social quality.
The Air Commodore lived for 62 years with his life partner Sibiha. He was among the lucky ones who enjoyed the company of his grandchildren. His two daughters Farida and Sonia are happy housewives settled in Lahore and UK respectively.  “My father was a great man”, states his son Daud Shah.
A graduate of Air Command and Staff College USA and Air War Staff College Quetta, Mansoor was a recipient of Sitara-e-Quaid-i-Azam from the President of Pakistan in 1970. He was also decorated with Commendation Certificate by Commander-in Chief, PAF on September 30, 1956. He was also decorated with Air University badge at Alabama (U.S.) in December 1956. Air Commodore Mansoor Ahmed Shah is an inspiration and a beacon for all PAF officers.