To achieve pinnacle standards in taking long range shots, shooters have to perform complex calculations in the field. The situation becomes more demanding due to the variety of rifles, ammunition and optics in use by Pakistan Army. In the book, Black Magic with Long Range Precision Rifle: Science and Art of cold Bore Accuracy at Unknown 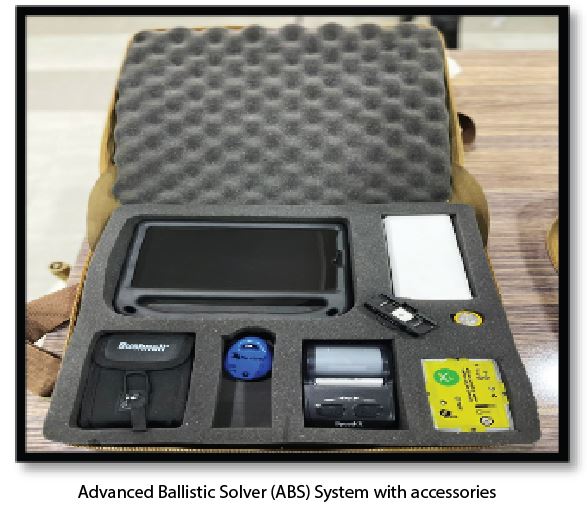 Distances, Lieutenant General Syed Muhammad Adnan offered comprehensive guidelines for the skill of precision long range shooting. However, due to the complexity of this skill and scientific knowledge needed, it is not easy for everyone to follow it up. Sensing this, the General Officer contemplated that a state-of-the-art autonomous self contained system with fully automated sensors is needed to provide timely and accurate ballistic data to the shooters with average scientific knowledge. National University of Technology (NUTECH) boasting a state-of-the-art innovation laboratory was entrusted by Inspector General Training and Evaluation (IGT&E) Branch to develop an automation system that can be easily used by soldiers in the field to engage targets till extended long range. A ballistic solver can reduce the training time and give an otherwise average shooter edge under demanding circumstances.
The currently available commercial ballistic calculators lack many features needed by a military shooter/sniper. They are stand-alone devices with none or very limited sensor integration. A shooter must resort to a lot of guesswork to enter critical data which increases the margin of error. Military-grade ballistic solvers are robust and use integrated systems and sensors so that critical input data is as accurate as possible. However, fully enabled military grade ballistic solutions are not available in the market owing to their criticality.
The first scientific study of rifle shooting in Pakistan is published in the book, Black Magic with Long-range Precision Rifle Shooting by Lieutenant General Syed Muhammad Adnan, HI (M). The book is a comprehensive manual for anyone desiring to become a long-range shooter. The data collected from the work undertaken by the General Officer was used as baseline and reference in the development of Advanced Ballistic Solver (ABS) system. 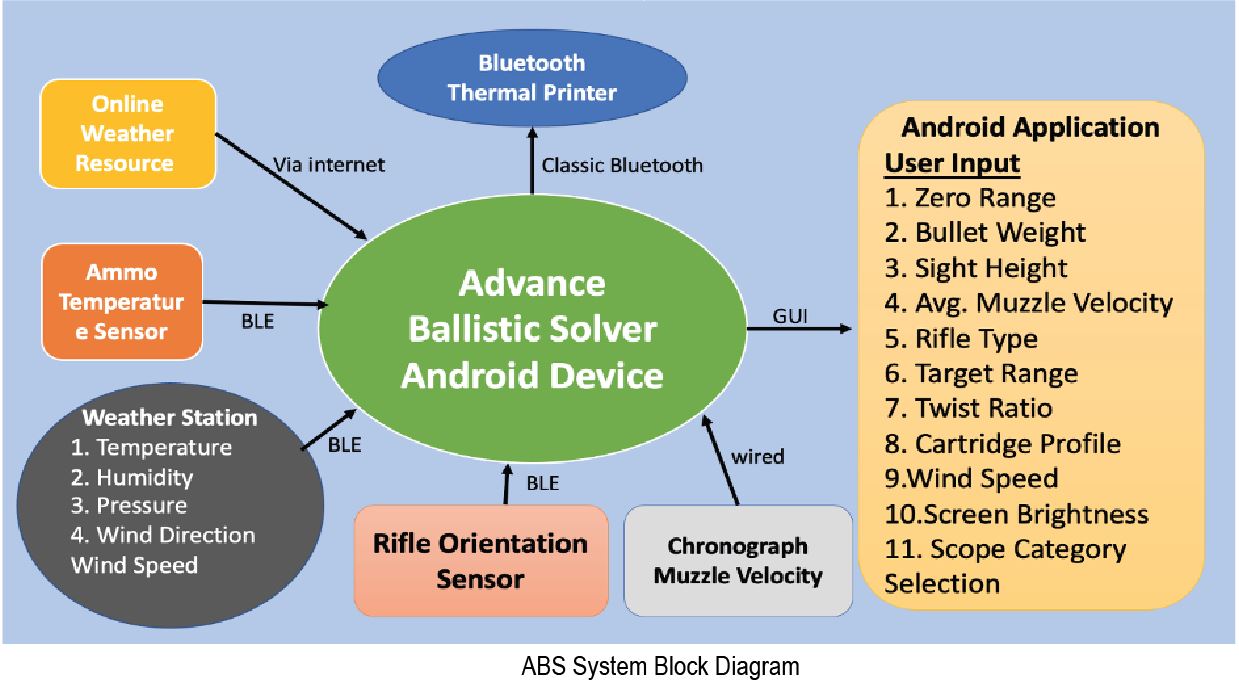 The engineering challenge is met by making use of the state-of-the-art sensors, flexibility afforded by modern application development platforms and the availability of huge 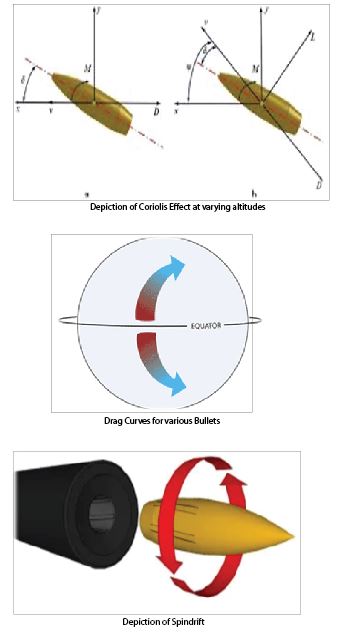 processing power and computational resources afforded by commercially available handheld computing devices. Through the use of these latest tools, equipment and skilful development process, a team of engineers at NUTECH, Islamabad, in collaboration with IGT&E Branch, engineered ABS, which is a reliable, efficient and effective system that ensures unmatched accuracy in providing reliable ballistic solutions in any given situation. Moreover, it is fully customized to the needs of Pakistan Army and is expected to add a lot of lethality to a fighting unit and subunit.
ABS helps predict the trajectory of a projectile by compensating environmental and atmospheric variables to increase the hit probability of the sniper-rifle-cartridge combination. An underlying issue of effectively accounting the impact of ambient conditions is addressed by ABS through deployment of multiple sensors that help predict an accurate point of impact at different ranges. The effectiveness of any ballistic calculator is a measure of its ability to synchronize with a variety of weapons, and to be customisable according to the shooter’s needs, ambient conditions, and tactical situation. ABS can provide a ballistic solution for weapons of various makes and specifications, long-range sniper rifles, short-range assault weapons and weapons with different types of optical sights. ABS caters for these differences by providing ballistic solution in Scope Clicks for different units of angular/linear measurement like Minutes of Angle (MOA), MILRAD (milliradians) and cm per 100 meters. Furthermore, different types of ammunition used with various weapons are also catered for in the device. In total, 12 different types of cartridges with varying charge weights and projectiles are a part of the system’s database. Moreover, ammunition customization can be done according to the user requirement. 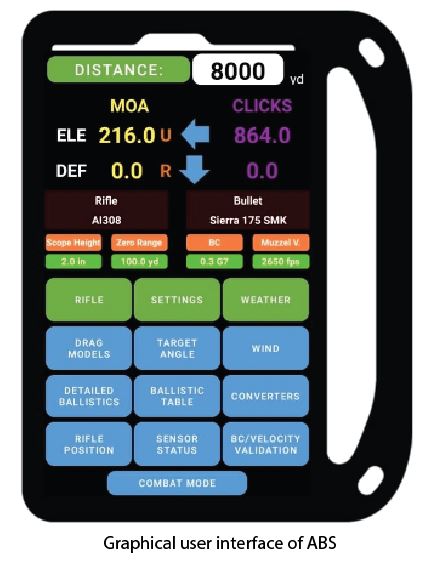 ABS is developed keeping in view all aspects that can affect a projectile’s hit probability. It is designed to accommodate all underlying factors to improve the overall accuracy and precision of the Rifle-Shooter System. To ensure the highest level of accuracy and hit probability, different mathematical models are used. For example, the mathematical modelling of drag curves for eight different types of bullets is implemented through algorithms that make ABS system reliable and adaptable.
Depiction of Coriolis Effect at varying altitudes
The Coriolis effect (earth rotation) is also modelled and then implemented through algorithms to calculate the Coriolis acceleration which indicates the elevation and deflection of a bullet due to this effect. The user does not have to worry about these kinds of calculations, as the device does it for him with a simple tap. Similarly, effects of spindrift are also mathematically modelled by calculating a stability factor through Miller’s Stability equation.
All this mathematical modelling, and its subsequent implementation through algorithms has made ABS a more accurate and robust system.

Any ballistic solver’s success depends on its user-friendliness. ABS provides this feature by providing a state-of-the-art graphical user interface (GUI) to its users.
In crunch situations, be it competitive shooting, training or life-threatening combat missions, time is the key. ABS ensures a quick response time via easy to operate GUI that generates calculated outputs in a matter of seconds. Upon launching the application, the user can select any rifle and customize its parameters based on his/her own bullet and rifle type. This is achieved via the already stored database of 15 custom rifles and up to 28 custom bullets. Bullets are stored in the database as per their calibre and make and can be selected by a user as per his/her profile. 3812 bullets with multiple calibres from different makers are also a part of the database. The user can easily set interval and range for detailed ballistic table, with all important environment and user profile parameters. This can also be printed through a miniaturized pocket printer provided with the system. This printed ballistic table is of great importance as it relieves the shooter from maintaining hard record so he/she can focus on the given mission. It provides Data on Previous Engagement (DOPE) which is beneficial for record-keeping and reference. And most importantly, in certain situations it eliminates the need to carry the entire system as this table provides data for selected engagement distances.
Another application feature is its ABS combat mode display. After setting all the parameters of the rifle, bullet and weather, users can switch to combat mode for visualizing each parameter in detail and observe the dynamic change of parameters by changing the target’s distance. To verify expected system behaviour, elaborate in-house and on-field testing was conducted by the development team in various conditions under the close supervision of IGT&E Branch. The underlying MOA difference between ABS and other ballistic solvers is found to be: 0.68 for ABS and JBM, -0.93 for ABS and Berger. Field testing was also a great success, where comparison was made between ABS and Kestrel, in which ABS outperformed Kestrel in shots fired at 360 yards, 470 yards and 800 yards.
ABS system comes with smart and all-weather durable casing, housing a smart tough tablet for user interaction, Laser Range Finder, Rifle Orientation Sensor, power bank, and a wireless Thermal Printer. All these devices connect to the application (on tablet) through Bluetooth, ensuring easy handling for the end user. ABS accommodates a multi-shooting platform and ensures the following aspects:
▪ To accommodate service and custom ammunition of all types.
▪ Increased first-round hit probability to 100% if all inputs are correct. 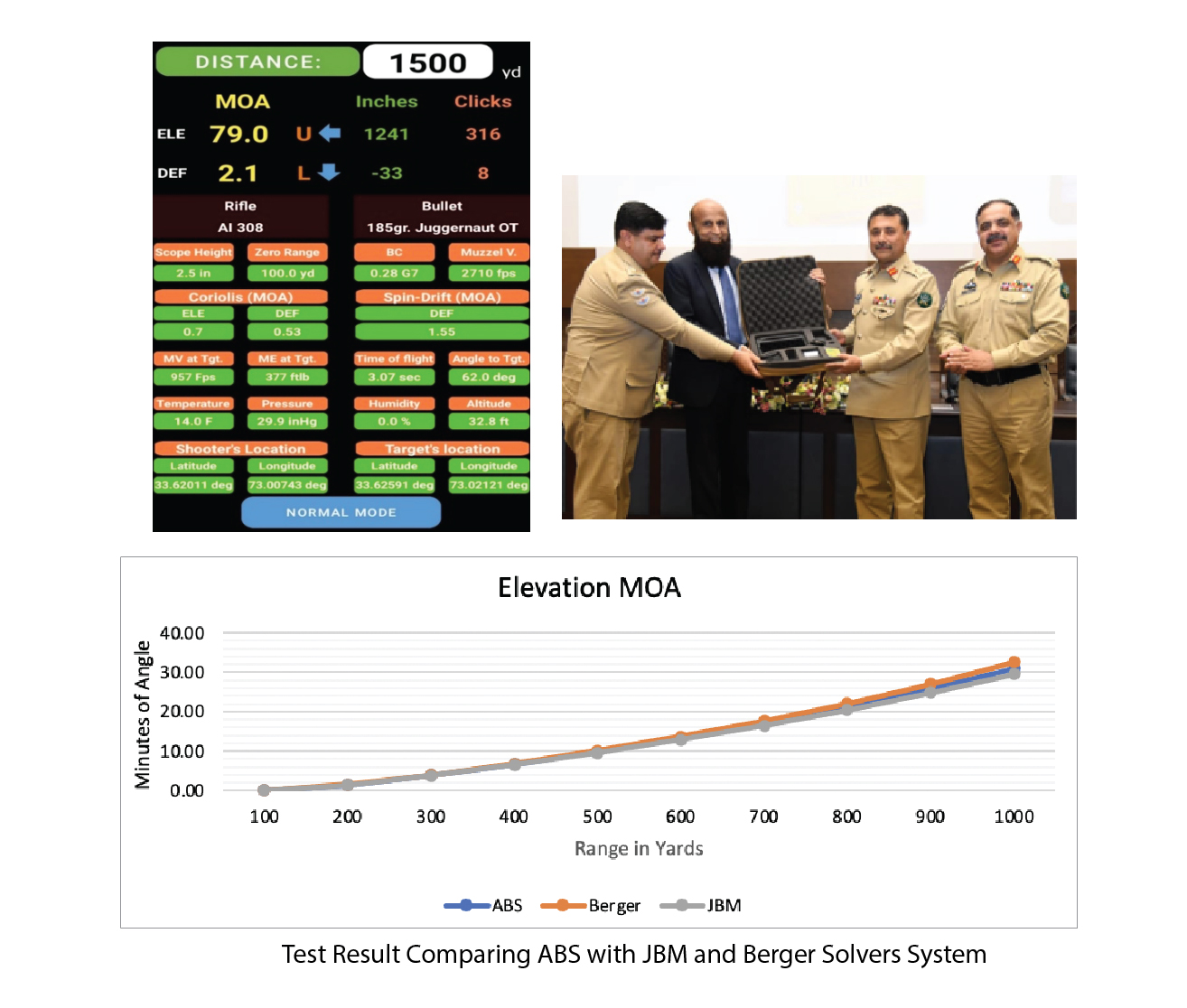 ▪ Eliminate the need to zero again in different conditions.
▪ Automatically integrated range finding.
▪ Availability of shooter and target coordinates.
▪ Integration of user-defined atmospheric data.
▪ Availability of user-defined ballistic table.
▪ User-friendly system.
Advanced Ballistic Solver system developed by NUTECH, Islamabad, is a complete solution for shooters. Its ease of use, accuracy, high first-round hit probability, multi-terrain and weather compatibility makes it a reliable gadget to include in one’s shooting equipment. ABS took concept and data from the book Black Magic with Long Range Precision Rifle by Lieutenant General Syed Muhammad Adnan, HI (M) and utilised it in a manner so as to make the system completely reliable. This has happened for the first time in Pakistan’s history where scientific research in the field of ballistics has been converted into a highly accurate user product. Probably it is the first of its kind gadget outside the USA, UK, Russia, France, Germany and Austria. With accurate drag models, inclusion of the Coriolis Effect and spindrift and mathematical modelling has made the system dependable at all locations across the country. Future prospects of the project include applications in the field of artillery, armour, and air defense systems.
ABS was handed over to Pakistan Army in a ceremony held at NUTECH, graced by IGT&E, Lt Gen Syed Muhammad Adnan, HI (M). IGT&E praised the efforts of NUTECH for achieving this important milestone. Currently, seven ABS devices have been handed over to different setups of Pakistan Army.