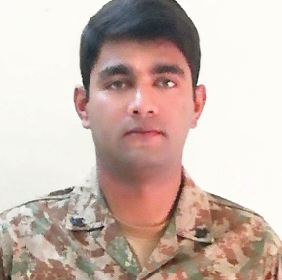 Some people are meant for such glory yet we cannot comprehend what destiny has in store for them ahead of time. They however show these immense qualities from the day they put on their uniform. It is only after they leave us for an eternal life that we are able to look with hindsight and recall all their accomplishments and instances where they had outshined everyone else around them. Truly, they are the chosen ones and their life in the superficial world of ours is only to rekindle the attributes of sacrifice, integrity and faith, in us. Captain Zargham Fareed Qureshi (TBt) was one such soul who died a death that all men in uniform dream of. 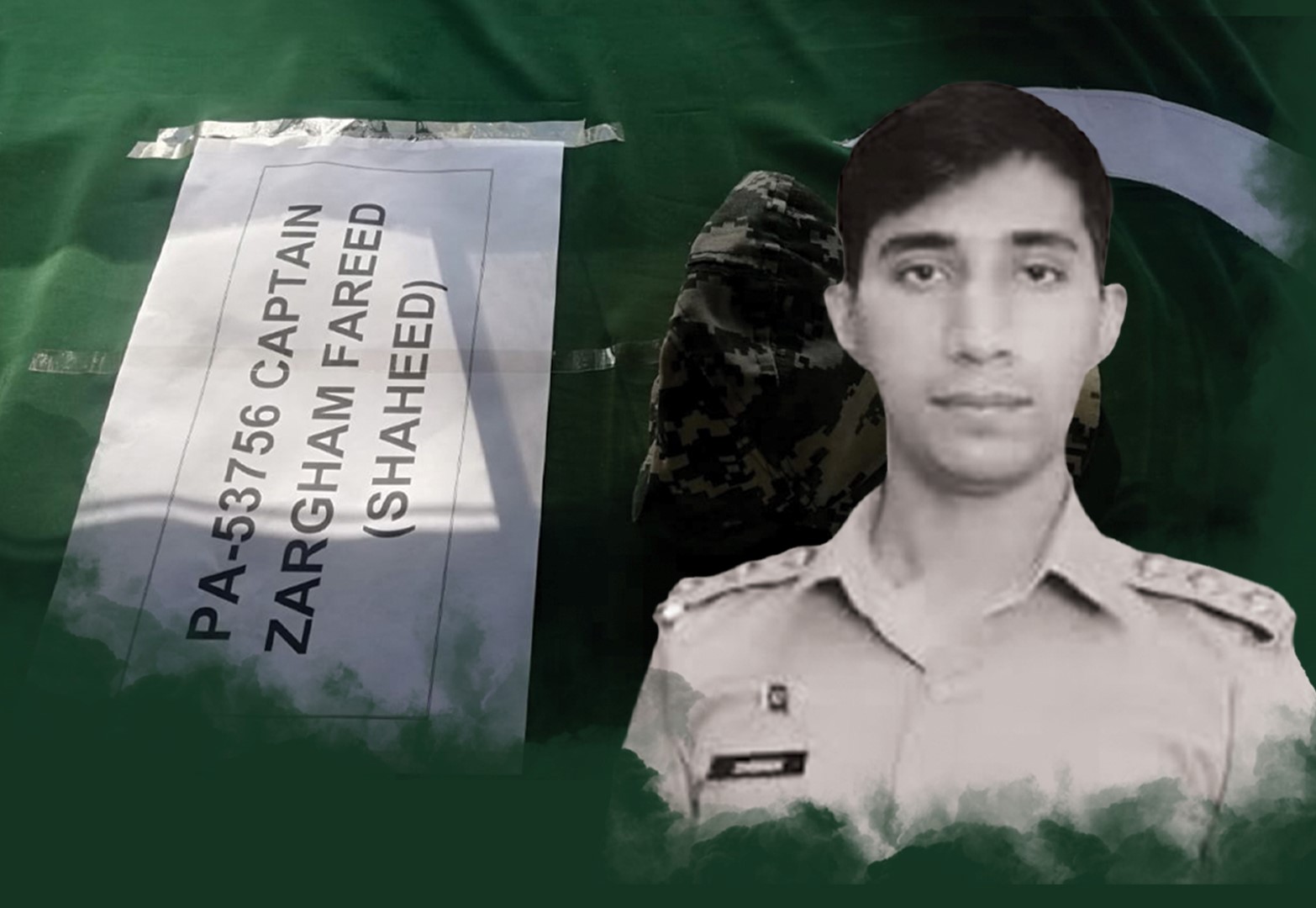 My association with Zargham goes back to 2012; from our days together in the Pakistan Military Academy. Being a term junior to me and from the same 3rd Pakistan Battalion as I, we had frequent interactions and often strict disciplinarian encounters, as expected between a senior and a junior. Specially so during the rehearsal days of Azadi Parade (2013), when most of the juniors would evade seniors to fetch a good night’s sleep. Zargham would always be present in his company lines and being a true specimen of soldierly qualities, I always found him to be upright and blunt honest, never fearing anything. A rare quality that he also displayed on the fateful day of 7th November, 2018 in Mohmand.
With a rather brief and more of a distant relation with Zargham from April 2012 to October 2013, due to the norms of the military academy being his senior, my next interaction with him that I would cherish all my life was in the School of Infantry & Tactics, Quetta. We were nominated for the same Young Officers’ Infantry Course in the first half of 2015. However, the affiliation developed with him during the course in Quetta is something that makes me remember him every day of my life. Here, the typical senior-junior relation between us faded to an extent and we both developed an affinity of respect, camaraderie, and mutual trust. From dining in the restaurants of Quetta on every weekend to riding our bikes for a dip in the tube wells, visiting Hanna Lake and Wali Tangi Dam to trespassing various peach and apple orchards in the suburbs of Quetta, Zargham was always very fond of adventure and, as mentioned earlier, never had an iota of fear.
Our time in Quetta went by within a blink of an eye and we departed to our respective duty stations. I joined my parent battalion deployed in Kashmir, while Zargham went to Malir Cantonment. From July 2015 till his shahadat in November 2018, we went on to meet and interact with each other on quite a few occasions, some because of official correspondence and most of the times, because of our deep-rooted affiliation. However, the last time I met Zargham was in May 2017. I was serving as a staff officer in Corps Headquarters, Karachi, and Zargham was still with his unit in Malir Cantonment. We would often meet on the weekends, as he would invite me to his unit and talk about life and what it means. Ironically, I would have never known about this facet of his personality, had I not been in Karachi at that time. I would have only known the jolly, flamboyant Zargham who had a larger than life persona. The depth he carried in him, his talks about the meaning and objective of life, and everything that had to be given up in order to gain eternity, baffled me to the core. This time it was a different Zargham that I saw, soberer, mature and quite observant. The changes in him were pleasantly appealing and impressive. Maybe the Almighty had already chosen him, and was preparing him to have a vision beyond the worldly horizon.
To recollect his memories and further explore the life he had spent in the army, I got in touch with his platoon mates of Haider – 129 Long Course and his unit officers of 87 (SP) Medium Regiment Artillery. But it must be confessed here in writing that my judgment and perception about his personality and traits was not only strengthened but his charismatic personality and lively presence had mesmerized all that knew him. His platoon mates from the military academy I got in touch with were all praises for him. Most importantly, the character traits that surfaced and resurfaced numerous times by different officers and those who were close to him were very similar: selflessness, raw courage and uprightness. No doubt, that with qualities like these Zargham was bound to achieve the zenith of glory which he did. In the same context, Captain Zargham’s Wing Commander, Lieutenant Colonel Asad Shabbir spoke very highly of his professional acumen, courage and devotion to duty, specifically in the operation conducted on November 7, 2018 (the details of which are copied from his citation). Zargham’s 205 Wing Mohmand Rifles was deployed on a strategically significant location comprising treacherous terrain on the Pak-Afghan international border, as it secured against trespassing into Mohmand and Bajaur districts from Afghanistan. Keeping in view the importance, as it was often used by terrorists to carry out terrorist activities inside Pakistan, fencing in this critical strip of land was a top priority of Pakistani commanders and to stall it, was at the top of priority list for the terrorists. However, little did the terrorists know that with sons like Zargham in the uniform, it is impossible for them to achieve their nefarious designs against the sacred state of Pakistan. 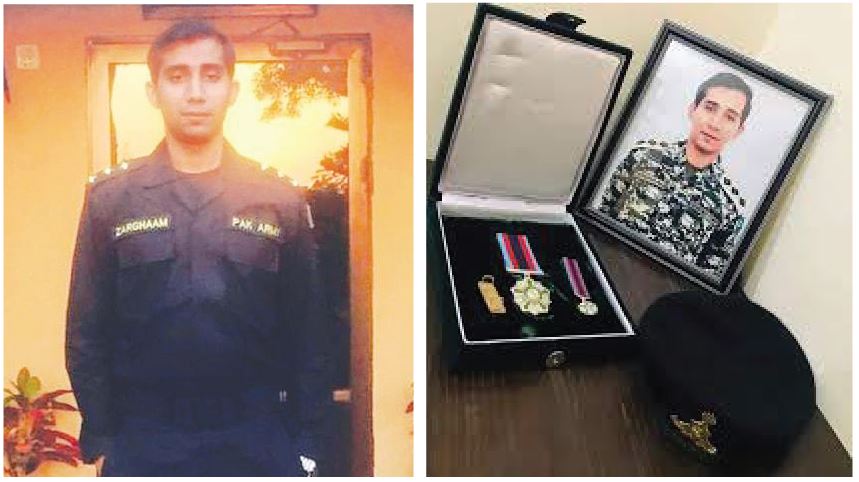 Knowing the chronicles of each martyr, previously I was convinced that they are a chosen lot and have been told so by Allah Almighty of the stature they would soon be achieving. But since I personally knew Zargham, now I know without a doubt that the design of Allah was already evident to Zargham, much like others before him. In an in depth discourse with his younger brother Adnan I got to know that Zargham had already told his mother that this time he would not be returning. Adnan, being very close to his brother, also felt a strange vibe the last time Zargham was on leave in September 2018. This was perhaps an aura of immense prestige associated with martyrdom that Zargham had started to radiate. A WhatsApp conversation with his childhood friend Atif perplexes a normal functioning brain as to how could Zargham tell his friend with such confidence that he would achieve martyrdom? How could Zargham while sitting in his unit’s tea lounge tell his commanding officer, Lieutenant Colonel Babar, “Sir we do not have any officer from our unit who has attained martyrdom, but I will get it changed” This cannot be a mere stroke of luck or just coincidence half a dozen times. This euphoria that Zargham had started experiencing is most certainly felt by all those that choose to walk the same path as he did.
Getting to know Captain Zargham Fareed Qureshi (Shaheed) and being in the circle of people he would call ‘friends’, is indeed an honour for someone like me. As it is because of Zargham and the tales of heroism he has written in the annals of history that I can proudly claim to have walked beside one of the finest men this nation has produced. People live and die, but martyrs live and shine on the blue sky we see each night, while we enjoy the freedom they paid for with their blood.

Captain Zargham Fareed Qureshi joined 87 Medium Regiment Artillery in April 2014. A true specimen of his name, ‘A Brave Warrior’, known for his pleasant personality, comradeship and professional competence. Zargham found a special place in the hearts of all unit members from the beginning.
In January 2018, he was attached with Frontier Corps KPK (North). Owing to professional competence and valour, he was assigned the responsibility to complete fencing along Afghanistan border in the area of responsibility (AOR) of 205 Wing Mohmand Rifles. On 7th November 2018, the brave son of soil was leading the fencing operation in area Pishtao Kandao, when his team detected an IED. Zargham bravely guided his men to safe area and moved forward with the Counter-IED team to diffuse it. Its neutralization was necessary as, without it being diffused the operation would be stalled. During the IED neutralization and seeing the gallant action by Captain Zargham, terrorists opened indiscriminate fire and detonated the remotely controlled IED. In the brief encounter that followed between critically injured Zargham and his men against the terrorists; Captain Zargham Fareed Qureshi embraced shahadat exemplifying the highest standards of comradeship, selflessness and devotion to duty.
Zargham’s brave and swift action resulted in failure of terrorists’ mission to stall the fencing operation and create deterrence amongst the law enforcement agencies. Although, he sacrificed his life, he managed to save that of many others. In recognition of his supreme sacrifice and gallant action, he was awarded, ‘Tamgha-e-Basalat’ by the Government of Pakistan on 23rd March 2019.